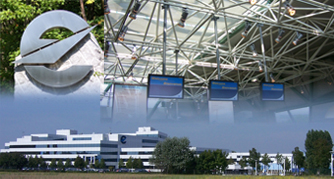 EUROCONTROL is a pan-European, civil-military organisation dedicated to supporting European aviation. EUROCONTROL is committed to implement, together with its partners, the European Union’s vision for a Single European Sky that will deliver the Air Traffic Management (ATM) performance required for the twenty-first century and beyond.

EUROCONTROL is an intergovernmental organisation of 41 Member States and 2 states with observer status. It also counts the European Community as a member.

EUROCONTROL is governed by an international convention. The current version, which is in the process of ratification, is known as the "Revised Convention". The Organisation is divided into three bodies: two governing bodies, the EUROCONTROL Commission and the Provisional Council, and one executive body, the Agency. The governance structure also comprises specialised entities which report to or advise these three bodies.

The Maastricht Upper Area Control Centre provides an air traffic control service in the upper airspace of the Netherlands, Belgium, Luxembourg and northern Germany. The safety management activities support European ANSPs in their efforts to keep ATM-induced incidents to a minimum, while ensuring that safety enhancements are in line with European regulations.

The Organisation is actively involved in research, development and validation and makes a substantial contribution to the SESAR Joint Undertaking. The aim is to deliver tangible results which will improve the ATM system's performance in the medium- and long-term.

The Organisation delivers quality training in air traffic management (ATM) to a variety of actors in the aviation community. A wide range of training services and products are being provides - from general introductory courses on ATM concepts to advanced operational training - building on more than 40 years of expertise. By delivering tailored training activities, EUROCONTROL supports pan-European network management and deployment activities, the implementation of the Single European Sky and the SESAR programme.