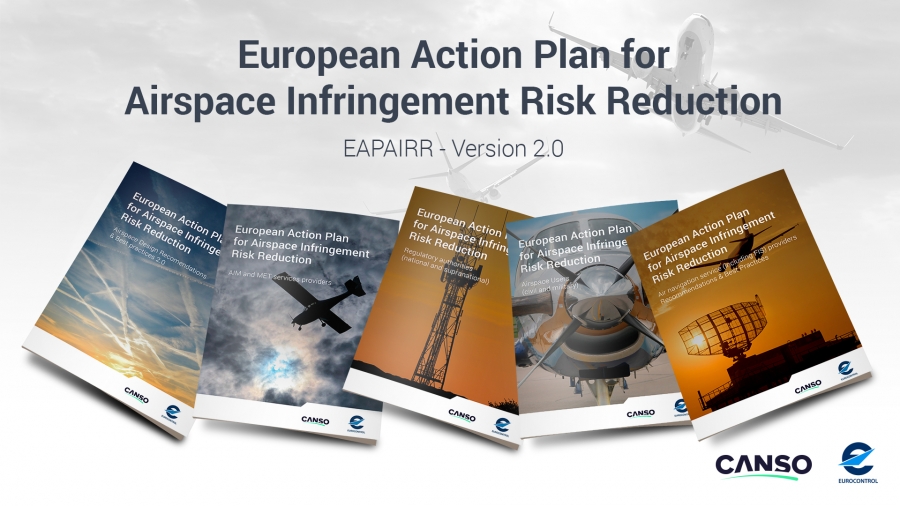 Airspace infringement, also known as “unauthorised penetration of airspace”, is a major operational hazard that can result from the division of airspace into different classes and structures, with their associated procedures and services, and its joint use by different categories of users, often with competing objectives and different operational requirements and capabilities.

Infringements are not rare events in busy European airspaces and, without prompt action by air traffic controllers and pilots, could result in a loss of separation, or even mid-air collision. Recognising the severity of this threat to aircraft operations and the need to ensure the safe use of airspace and sustainable development of commercial, military and general aviation in the short, medium and long term, the major aviation stakeholder groups in Europe agreed that coordinated actions should be taken to control this aviation risk. The launch of the Airspace Infringement Safety Improvement Initiative in 2006 provided the vehicle for achieving this goal.
The first Action Plan was initiated in 2006, and was the key deliverable of the European Airspace Infringement Initiative. The Action Plan, delivered in 2009, presents a set of safety improvement measures and provides guidance on how they can best be implemented. This action was partially adopted throughout the European Aviation Industry.

The plan was developed with the support of, and active contributions from, organisations representing the airspace users, service providers, regulatory and military authorities. Notable contributions were made by the International Council of Aircraft Owner and Pilot Associations (European region), Europe Air Sports, Association of European Airlines, International Air Transport Association, the European Commission and EUROCONTROL.

Ten years after that publication the issue of Airspace Infringements is still present, as is the associated risk. Many local and regional initiatives have been running for a number of years. These have resulted in the sharing of many best practices and have gone some way to reducing the risk slightly, but they have come nowhere near to eliminating it. With a further developed aviation industry, which has seen increased traffic in both General Aviation and Commercial Aviation and Flexible Use of Airspace (FUA) by the military, the environment has changed as well. Other developments like the evolution of Flight Information Service, 8.33khz implementation, development of surveillance and detection equipment, changes in airspace structures and activations, and last but not least the rapidly increasing professional and recreational drone activities may have an impact on the risk as well.

All the aforementioned elements and the open ends to the questions, demand a renewed European Airspace Initiative. Again, the ultimate goal is to develop a risk reduction action plan and support airspace users, civil and military service providers and national authorities in implementing the recommended safety improvement measures for the timeframe 2020-2030. CANSO and EUROCONTROL chair the initiative which draws on the expertise and close support of a working group of stakeholders.

The recommendations have been divided in 5 domains: Airspace Design (AD), Air Navigation Service Providers (ANSP), Airspace Users (AU), Aeronautical Information Management (AIM) & Meteorology and Regulators (REG). The document is available in a full version and in booklets per domain, and is complemented by a list of implemented best practices by the contributing stakeholders.

Tackling airspace infringements has been a high priority for many European ANSPs for almost two decades. Much time and energy has been expended in reducing the risk of a mid-air collision caused by an infringement. These actions have been successful in managing the risk to an extent, but leaves a lot of room for improvement. Data from the ECR (European Central Repository for Aviation accident and Incident Reports), retrieved by EASA, shows that during 2010-2021 there were over 32,800 reported infringements in the EASA member states and the United Kingdom. 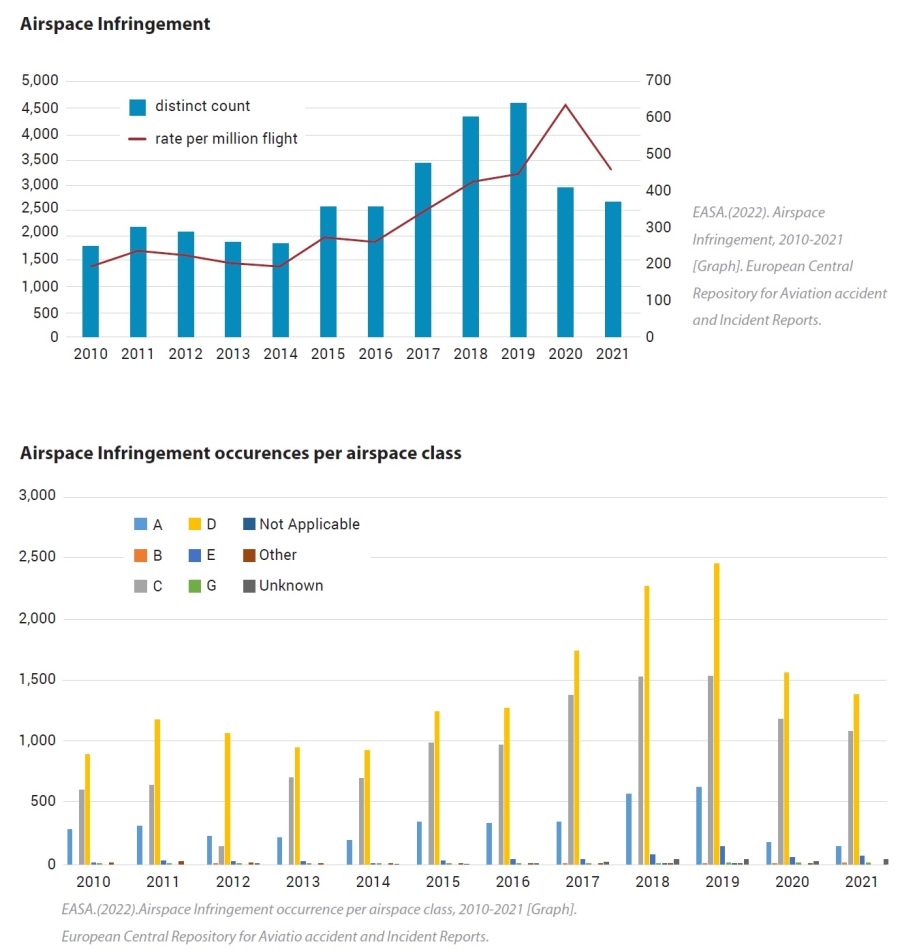 Despite the lower numbers in 2020 and 2021 due to the COVID-19 pandemic, this continues a trend that has been ongoing for nearly twenty years. It is worth reminding ourselves that the true risk of airspace infringements is higher than currently documented. Evidence from a number of EUROCONTROL and individual ANSP Safety Culture surveys, internal audits, and questionnaires shows that many ATCOs admit that they are less likely to report airspace infringements if, in their subjective opinion, the situation was not perceived as a major threat.

Analysis of the data available from a number of different sources shows some clear trends. The majority of infringement events happen in TMAs, CTRs, and CTZs: the majority involve GA pilots flying under VFR: the majority occur due to issues regarding navigation, planning, distraction in the cockpit, and/or difficulty dealing with unexpected or unfamiliar weather conditions.

The overall upward trend may be influenced by the increasing awareness of this type of risk and other improvements in the general reporting culture. However, a comparison with the evolution in the number of reported incidents assigned to other key risk areas (such as Separation minima infringement and Near CFIT) shows a particularly marked trend. It should also be noted that a number of states still do not report this category of safety occurrence.

The data shown in the figures above comes from the European Central Repository for Aviation accident and Incident Reports (ECR) and illustrates the infringement data for the subject period, as collected, analysed and reported by EASA. It must be recognised that different organisations, whether they are ANSPs, Regulators, National Authorities, or flying clubs, capture, analyse, assess, and report such data in a variety of ways and using a number of methodologies. This can and does lead to apparent variations between organisations in the absolute numbers of events, including airspace infringement events reported year-on-year. Nevertheless, the data published in this plan serves as an illustration of the continuing scale of the challenge faced in reducing the number and severity of airspace infringement events across Europe.

Focus on the Problem

The three potential major consequences, which result from airspace infringements, are:

The worst-case scenario. Only the collaboration of all aviation sectors can prevent this.

An infringement leading to loss of separation or close proximity of aircraft could have a number of consequences, e.g. loss of control due to wake vortex encounter, violent avoiding manoeuvres, and injuries to passengers or crew as a result.

Especially in congested airspace there is potential for a significant increase in controller and pilot workload due to the need to break off an approach, change aircraft sequence for landing, or implement other contingency measures, as well as the resulting R/T congestion.

The most commonly infringed airspace structures are Terminal Manoeuvring Areas (TMAs) and airport Control Zones (CTRs). The majority of infringements occur during level flight by the infringing aircraft rather than on departure or approach. Airspace infringements are caused by a range of user types, including OAT (Operational Air Traffic) and commercial air transport. However, analysis of the incidents reported by European ANSPs clearly indicates the majority of infringements are committed by GA VFR flights, although there is some local variation due partly to variations in local airspace and rules.

Airspace infringements occur when an aircraft enters notified airspace without previously requesting and obtaining clearance from the controlling authority of that airspace or enters the airspace under conditions that were not contained in the clearance.

Although VFR flights do not require clearance to enter Class E airspace, serious incidents have occurred between VFR and IFR flights in such airspace due largely to limitations in the “see-and-avoid” principle.

All classes of aircraft are prone to airspace infringement, but the majority of incidents recorded involve General Aviation (GA).
Airspace infringements create a significant safety risk. This safety risk often cannot be controlled by ATC. Many infringements result in losses of separation with commercial passenger-carrying aircraft, or inadequate separation where there is no prescribed separation. Furthermore, the disruption to the operation of the ATM system caused by airspace infringements is significant. There is also an increasing incidence of airspace infringement by unmanned aircraft (UAs), commonly referred to as drones. UA use is currently limited compared to future predicted usage. The rapidly expanding UA market – especially the potentially overwhelming increase in the use of UAs for commercial logistics, delivery and taxi flights – means that actions to manage the safety risk of airspace infringement must also take into account the emerging UA phenomenon. However, because of the emerging nature of the UA phenomenon it is not possible to assess the potential impact of their use on Airspace Infringement risk. Therefore, because of the projected timescales involved in the current EAPAIRR project, drones and UAs will be treated as out of scope.

How to use this action plan

The safety recommendations and best practices in this action plan are arranged in tables for each of the following groups of action owners:

Some of these action owner groups may be included in one organisational entity. For example, the provision of AIS or MET services may fall within or outside the responsibility of the ANSP (civil or military), but all entities providing such services should consider that list of actions.

Not all actions are phrased in precise terms as measurable achievements that can be ‘ticked off’ when completed. Some are, intentionally, phrased in more general terms - such as ‘improve’ or ‘harmonise’. This recognises that some actions are matters of degree and that there should be flexibility for action owners to decide how far they need to go, in line with their particular operational context and safety needs. It is acknowledged that different action owners will start from different positions.

While airspace infringement is an important operational risk across much of Europe, the nature and scale of the problem varies between States. The complexity of the airspace structure, the scale of military flying activity, the scale and maturity of both commercial and general aviation sectors, the scope and nature of air traffic service provision and State’s regulatory and legislative frameworks are the factors which will shape the local airspace infringement risk reduction strategies and determine the most appropriate and effective actions to be taken by individual States. Therefore the number of Action Plan recommendations that can be implemented is likely to differ from State to State.

National authorities should play the leading role in establishing and promoting local implementation priorities and actions in consultation with airspace users and service provider organisations.

Since almost 30 year ago, EUROCONTROL provides support to the ATM community in planning and reporting their progress on implementing the European ATM Master Plan Level 3 (also known as the European Single Sky ImPlementation, ESSIP).

The Level 3 of the ATM Master Plan addresses the deployment towards operational implementation, therefore focusing on the plans for 5 to 7 years ahead.

Therefore, the EAPAIRR 2.0 is expected to be part of the reporting cycle detailed above as a new Implementation Objective starting on ATM Master Plan Level 3 Implementation Plan Edition 2022, and in alignment with the rest of the Single European Sky improvement actions to the overall European ATM system.

Articles in the Airspace Infringement Category