A Fata Morgana is a type of mirage. A mirage is an image caused by atmospheric refraction. Refraction refers to the bending of, in this case, light waves as they move through mediums of different density, typically layers of air with different temperatures. In particular, a Fata Morgana is a superior mirage.

A superior mirage occurs when there is a temperature inversion; the air below the line of sight is colder than the air above it. Passing through the temperature inversion, the light rays are bent down, and so the image appears above the true object, hence the name superior. Most superior mirages tend to be stable, as cold air has no tendency to move up and warm air has no tendency to move down. Superior mirages can make objects below the horizon visible at least in some form or distort the image of an object at the horizon.

Superior mirages can make things appear bigger, closer, or suspended in air. A superior mirage can be right-side up or upside down, depending on the distance of the true object and the temperature gradient. Often the image appears as a distorted mixture of up and down parts.

Superior mirages can produce a few different types of images: distant objects can appear to float high above their actual position, for example a boat can look like it is floating in the sky, or an object below the horizon can become visible. This is known as a looming type of superior mirage. Superior mirages can also distort images so that the object appears stretched and elevated, called towering. 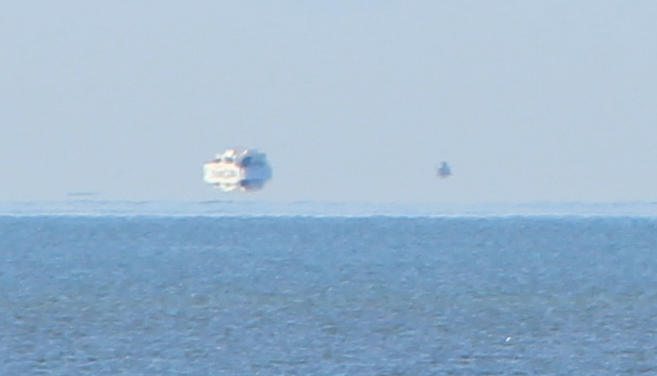 FataMorgana photographed off the Queensland coast, 26 August 2012 (Source: Timpaanen, Wikicommons). This example shows a ship that appears to be floating above the horizon

A Fata Morgana is a complex form of superior mirage that is seen in a narrow band right above the horizon. It is an Italian term named after the Arthurian sorceress Morgan le Fay, from a belief that these mirages, often seen in the Strait of Messina, were fairy castles in the air or false land created by her witchcraft to lure sailors to their deaths. Although the term Fata Morgana sometimes is applied to other more common kinds of mirages, true Fata Morgana is different from both an ordinary superior mirage and an inferior mirage, in which the image appears below the actual object.

Fata Morgana mirages significantly distort the object or objects on which they are based, often such that the object is completely unrecognizable. A Fata Morgana may be seen on land or at sea, in polar regions, or in deserts. It may involve almost any kind of distant object, including boats, islands, and the coastline.

Often, a Fata Morgana changes rapidly. The mirage comprises several inverted (upside down) and erect (right side up) images that are stacked on top of one another. Fata Morgana mirages also show alternating compressed and stretched zones.

Like other superior images, a Fata Morgana occurs because rays of light are bent when they pass through air layers of different temperatures in a steep thermal inversion where an atmospheric duct has formed. If the thermal inversion is strong enough (greater than 10 degrees C in 100 meters), the curvature of the light rays within the inversion layer is stronger than the curvature of the Earth (called “super-refracting”), thus trapping them. This is the duct. It will guide the rays along the surface of the earth rather than shooting out into space. An observer needs to be within or below an atmospheric duct in order to be able to see a Fata Morgana.

A Fata Morgana may be observed from any altitude within the Earth's atmosphere, from sea level up to mountaintops, and even including the view from aircraft.

A Fata Morgana superior mirage of a ship can take many different forms. Even when the boat in the mirage does not seem to be suspended in the air, it still looks ghostly, and unusual, and what is even more important, it is ever-changing in its appearance. Sometimes a Fata Morgana causes a ship to appear to float inside the waves, at other times an inverted ship appears to sail above its real companion.