A warm dry wind that blows down the lee side of a mountain.

In order to describe the Foehn Effect and its resultant wind, an example like the one presented below is generally used. Values for temperature and mountain range elevations may vary.

The Foehn Effect also may be associated with mountain wave activity.

As well as creating a warmer climate, these dry winds can increase the potential for wild fires during the summer months which may affect flying operations. 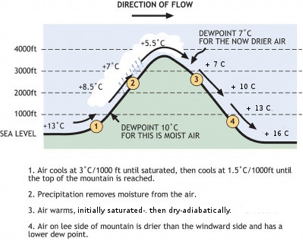