Free Route Airspace (FRA) is a specified airspace within which users may freely plan a route between a defined entry point and a defined exit point. Subject to airspace availability, the route can be planned directly from one to the other or via intermediate (published or unpublished) way points, without reference to the ATS route network. Within this airspace, flights remain subject to air traffic control.

Free route airspace (FRA) is a concept of providing air traffic services in which an operator can choose their route subject to only a few limitations (e.g. fixed entry and exit points and the need to avoid danger areas, TRAs or TSAs) as opposed to the situation where standard airways should be used. In most cases the straight line between an entry point and an exit point will be chosen. If for some reason this is not appropriate (e.g. a danger area needs to be avoided) additional turning points can be specified. These can be navigational aids, published navigational points or points with specified coordinates. The following diagram gives an overview of the main FRA rules: 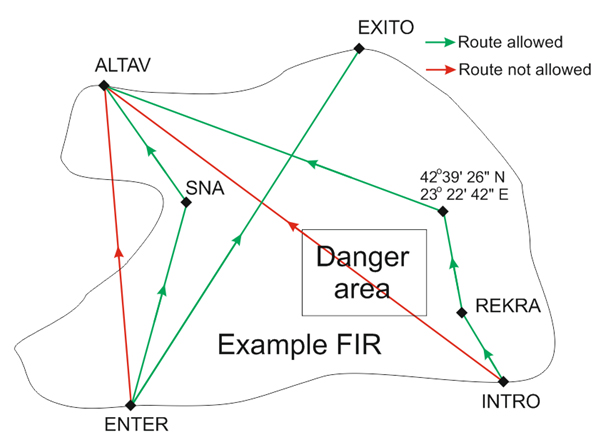 Example of allowed and not allowed FRA routes to be considered during the pre-flight planning.

In the example FIR depicted, INTRO and ENTER are entry points, ALTAV and EXITO are exit points, SNA is a VOR and REKRA is an RNAV point. When FRA is implemented, the green routes would be accepted and the red routes would be rejected by the ATC flight plan processing system.. The reasons for rejection include the crossing of a danger area (INTRO-ALTAV) and the requested route not remaining within the FRA (ENTER-ALTAV). The approved routes can be either direct from an entry to an exit point (e.g. ENTER-EXITO) or with intermediate points (navigational aids (SNA), published points (REKRA) or randomly selected points (42°39’26” N, 23°22’42” E)).

Free route operations can be:

The introduction of FRA in Europe is a step-by-step process rather than a single act. Most states have decided to start with a limited implementation (e.g. during night hours) and then gradually expand it.

By the end of 2022, most European countries have implemented FRA at least partially (but mostly on H24 basis). Also, there are many cross-border implementations, i.e. more than one ACC participating in a FRA initiative. This is shown on the picture below. 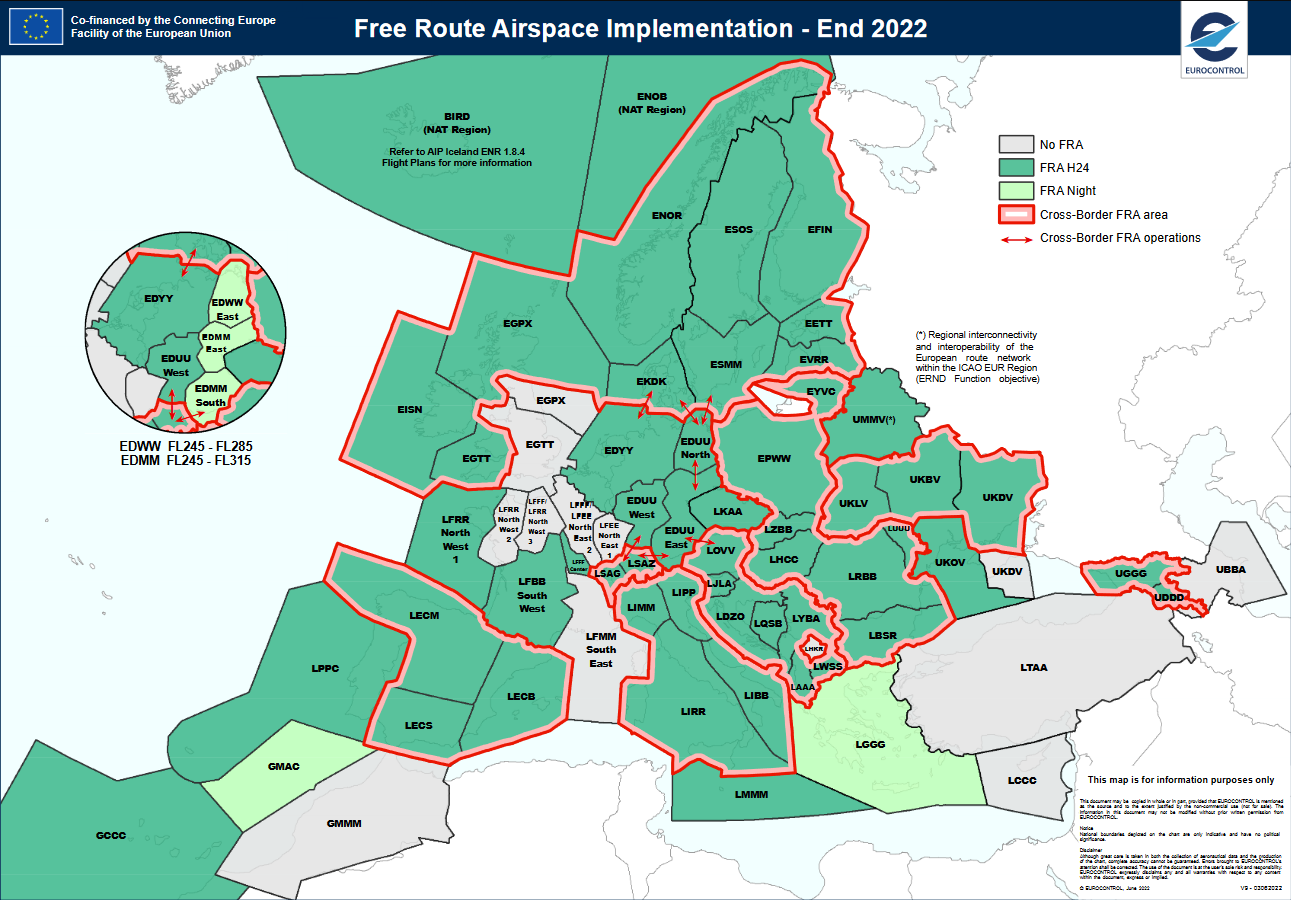 FRA implementation in Europe at the end of 2022

The process continues and it is expected that it will be finalized by the end of 2025 (see picture below). 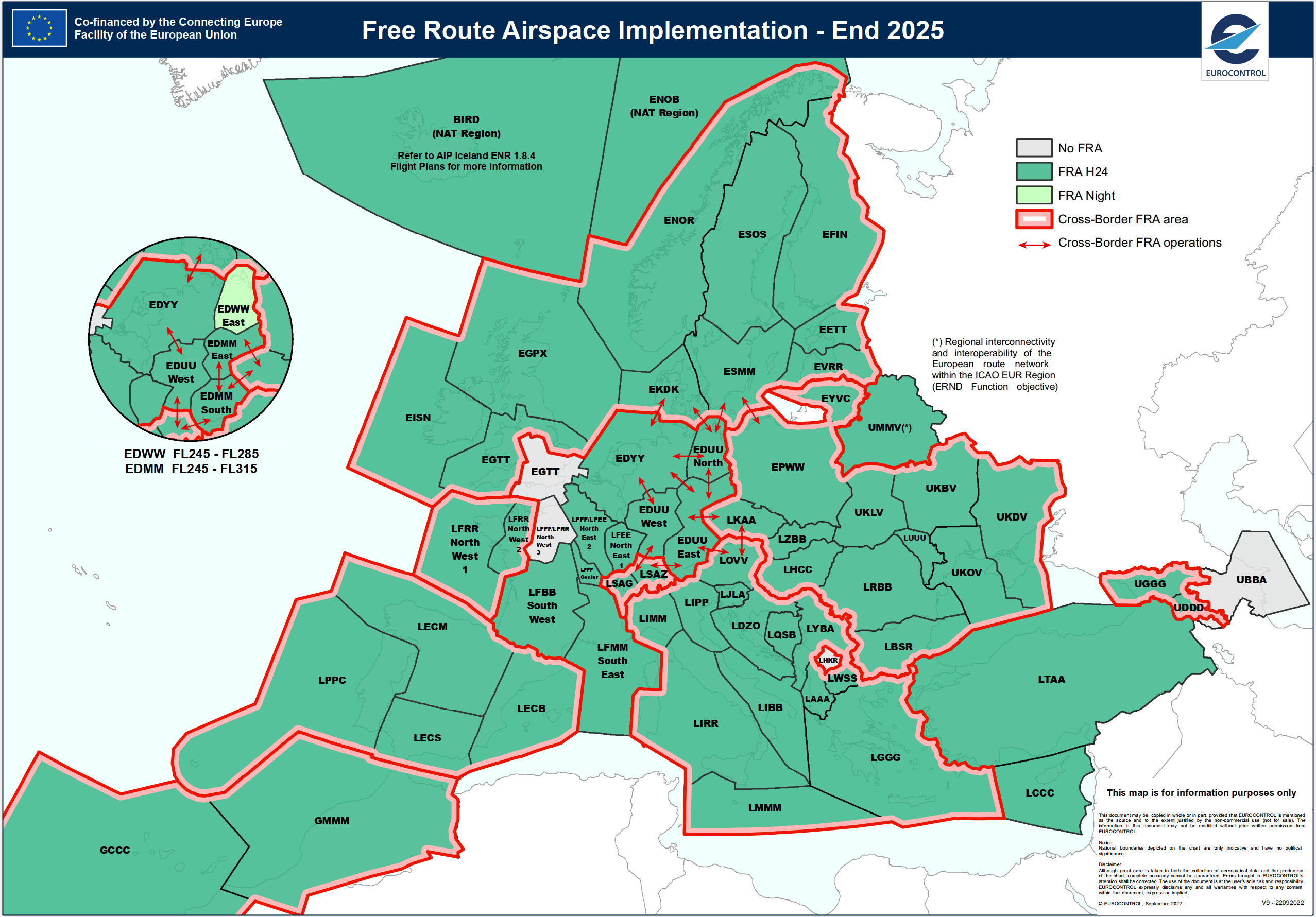 Projected FRA implementation in Europe at the end of 2025

The implementation of FRA offers a number of efficiency benefits for the operators. There are also a number of challenges and issues but, overall, this is considered one of the most cost-effective changes to the ATS provision in Europe. The most notable benefits are:

As any new technology and procedure in aviation, FRA poses a number of challenges to the users. These do not outweigh the benefits but need to be addressed properly in order to gain the best of FRA. Such issues and challenges are:

The following measures can be used to mitigate the safety issues and to cope with the challenges posed by FRA implementation. The list is not to be considered exclusive.