The Fujiwhara effect, sometimes referred to as Fujiwara interaction or binary interaction, is a phenomenon that occurs when two nearby cyclonic vortices orbit each other and close the distance between the circulations of their corresponding low-pressure areas. The effect is named after Sakuhei Fujiwhara, the Japanese meteorologist who initially described the effect in the 1920s. Binary interaction of smaller circulations can cause the development of a larger cyclone, or cause two cyclones to merge into one. Extratropical cyclones (midd and high latitude lows) typically engage in binary interaction when within 2,000 kilometres (1,200 mi) of one another, while usually smaller tropical cyclones typically interact within 1,400 kilometres (870 mi) of each other. 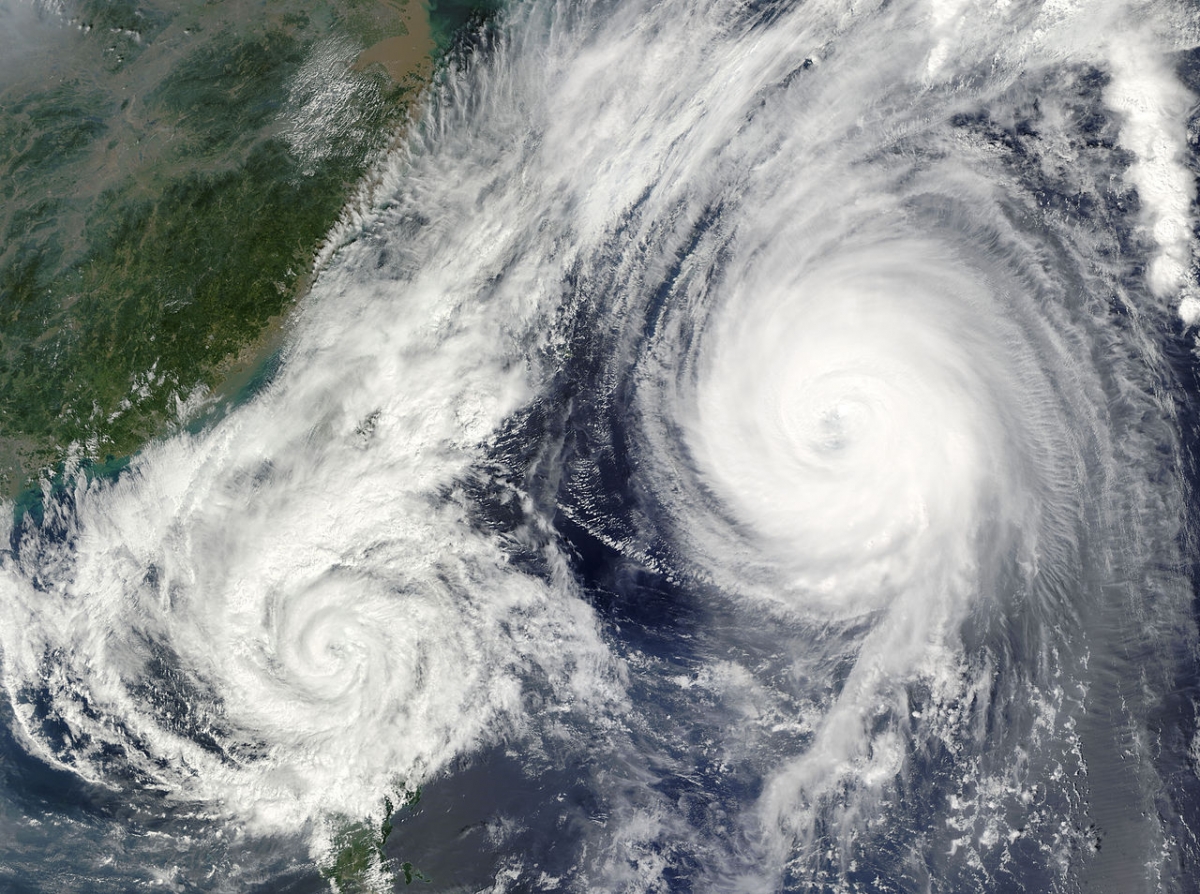 Typhoon Parma (left) and Melor (right) interacting with each other in the Philippine Sea on October 6, 2009. Source:Wikicommons

When two cyclones begin to interact, the relative size of the systems often dictates their ultimate interaction. When the two vortices are of unequal size, the larger vortex will tend to dominate the interaction, and the smaller vortex will orbit around it, and finally be absorbed by it.

It is when the two cyclones are relatively the same size that the true Fujiwhara Effect takes place.

When cyclones are in proximity of one another, their centers will begin orbiting cyclonically (counter-clockwise in the Northern Hemisphere and clockwise in the Southern Hemisphere) about a point between the two systems due to their cyclonic wind circulations. The two vortices will be attracted to each other, and eventually spiral into the center point and merge.

The Fujiwhara effect is most often mentioned in relation to the motion of tropical cyclones, although the final merging of the two storms is uncommon. The effect becomes noticeable when they approach within 1,400 kilometres (870 mi) of each other. Rotation rates within binary pairs accelerate when tropical cyclones close within 650 kilometres (400 mi) of each other. Merger of the two systems (or shearing out of one of the pair) becomes realised when they are within 300 kilometres (190 mi) of one another.

The Fujiwhara effect is seldom seen in the Atlantic basin due to the lack of tropical cyclones and subsequent infrequent occurrence of two storms in close proximity. It is more common in the Pacific where tropical cyclones are more numerous.

Binary interaction is seen between nearby extratropical cyclones when within 2,000 kilometres (1,200 mi) of each other, with significant acceleration occurring when the low-pressure areas are within 1,100 kilometres (680 mi) of one another. Interactions between their circulations at the 500 hPa level (18,000 feet above sea level) behave more predictably than their surface circulations. This most often results in a merging of the two low-pressure systems into a single extratropical cyclone, or can less commonly result in a mere change of direction of one or both of the cyclones. The precise results of such interactions depend on factors such as the size of the two cyclones, their distance from each other, and the prevailing atmospheric conditions around them.

Merging of Extratropical and Tropical Cyclones