G-induced Impairment and the Risk Of G-LOC

G-induced Impairment and the Risk Of G-LOC

When executing rapid flight control inputs to effect changes in the trajectory of an aircraft certified for aerobatic manoeuvres, the pilot may be vulnerable to G-induced impairment which can culminate in G-induced Loss of Consciousness (G-LOC). The effects are a result of the inertial forces created during such manoeuvres and the vulnerability to their physiological consequences which has been shown to vary widely amongst individuals.

This article specifically considers only the risk of G-induced impairment which might arise from Gz acceleration whilst flying propeller-driven light aircraft and all further reference to ‘G’ can be read as a reference to Gz. Emphasis will be on explaining the potential danger of exposure to +Gz rather than to -Gz, since the effects of the latter cause early and obvious discomfort to pilots which is invariably sufficient to effectively limit any higher and consequently hazardous levels of exposure. Whilst it is perfectly possible to encounter symptoms of G-induced impairment at even relatively low multiples - say 3G - if they are sustained for more than a few seconds, particular attention will be focussed on excursions to higher G multiples sustained more than very briefly where G-LOC with no perceptible visual warning signs can occur, since awareness of this possibility is not prominent in much of the widely available comment and advice on this subject. Finally, the slightly different physiological effects of being close to loss of consciousness (A-LOC - ‘Almost Loss of Consciousness’) will also be considered on the same basis.

The phenomenon of G-LOC has been recognised since the 1930s but much of the study of it has been undertaken in a military context and not all of the implications of its findings have been fully applied to the somewhat different context of civil flying, much of it undertaken as a leisure activity by pilots with only a private licence and a medical examination standard commensurate with such a licence.

Most propeller-driven civil aircraft with a type certificate which permits aerobatic manoeuvres are not specifically designed for aerobatics and have a positive G limit which, provided it is not exceeded, will preclude almost all pilots in good physical health from the risk of suffering significant effects from either G-LOC or A-LOC. However, although there have long been some specialist aerobatic aircraft designed for the civil market, readily available types now include many with higher G loading limits than the previous widespread maximum of +6/-5G as offered by, for example, the early Pitts Specials. The Extra 200 and Extra 300 for example now offer +/- 10G and such capability has materially increased the risk of an encounter with G-induced impairment leading to either G-LOC or A-LOC without any prior alerting through loss of visual acuity. Improvements of older designs - many Pitts Special’s are now cleared for +9/+7.5G and more high performance ex-military types such as the Yak 50 and Yak 55 (both +9/-6G) are also more widely available to pilots who may have limited experience and understanding of the risk posed by some aerobatic manoeuvres. Whilst the accelerometer or ‘G-meter’ (which measures Gz) fitted to all aircraft approved for aerobatic flight fairly accurately records the maximum level of both positive and negative G which has been experienced since it was reset, the priority of flying the aircraft means that many relatively inexperienced pilots do not have the capacity to note the level of G which is registered during particular manoeuvres and may not always be able to deduce where the indicated maximum levels of G are likely to have occurred after a sequence.

Very little research on the onset of G-LOC has been conducted using a fully instrumented aerobatic light aircraft but data which supports the existence of a risk which is still not widely understood was gathered for a review carried out in Australia in 1987 after a fatal accident to a Bellanca Decathalon 8KCAB aircraft (+6/-5G) in that country which it was suspected was caused by the effects of G-LOC.

Even less research has been undertaken into A-LOC although it is now widely recognised that A-LOC is part of a spectrum of cognitive function impairment in which G-LOC is merely the ultimate stage. The Investigation into a 2011 fatal accident to a Royal Air Force Aerobatic Team Hawk concluded that “the most likely cause of the accident was G-induced impairment (A-LOC) of the pilot leading to flight into terrain”. In this case, it was established that the accident pilot had been exposed to just over 6G with a time above 3G equivalent to just under 9 seconds as he initiated a steeply-banked climbing turn from low level at high speed. Half way round the turn, pilot pressure on the stick had been sub-consciously relaxed and the aircraft had begun to descend and overbank. An alert from the pilot of a following aircraft in respect of the descent resulted in the wings being rolled level and a pitch up input being made but at the prevailing altitude, these occurred too late to prevent terrain impact.

Studies mainly relying on instrumented centrifuges have shown that recovery to normal function after G-LOC typically lasts around 15 seconds which may be long enough to prevent recovery of control of an aircraft before this becomes impossible or terrain impact occurs. Other centrifuge experiments have suggested that recovery from A-LOC is much quicker, beginning within a few seconds of G levels reducing below the relaxed G tolerance of an individual, a level which appears to be around 3.5G when unprotected. Research using both on-aircraft recording and centrifuges has also found that it is common for pilots to have no subsequent recollection of a period of unconsciousness.

The Physiological Effects of high G

Medically-instrumented centrifuge experiments have been the source of data on the physiological effects of high positive G and the transition to it. How and with what effects the movement of blood from the head towards the legs and the inhibition of any compensating upward movement of freshly oxygenated blood occur is now much better understood. As this movement occurs, blood pressure in both the brain and the eyes is reduced and eventually they have insufficient blood to function normally. However, although there is an established potential sequence of effects on both vision and muscular coordination before loss of consciousness occurs, it is important for pilots to recognise that we now know that visual effects prior to incapacitation - the only warning signs discernable to a pilot - do not necessarily occur.

In both military and civil aerobatic flying and in respect of both jet and propeller-powered aircraft, the most likely manoeuvres to produce this symptomless occurrence of g-induced impairment are a sharp pull out of a dive and a high speed entry into a steeply banked co-ordinated turn.

Where visual symptoms do occur, an appropriate response to them will enable controlled flight to be maintained and the risk of G-LOC to be avoided. The initial awareness of a loss of visual acuity will feature concurrent physical impairment. The first visual effect may be a loss of peripheral vision which initially creates ‘tunnel vision’ and if no action is taken, this may then deteriorate further to create ‘gun barrel vision’. Whether or not this ‘grey-out’ phase occurs, a complete loss of vision - blackout - is the next potential stage. At this point, effectively A-LOC, the pilot will be suffering from confusion and disorientation but some mental activity and muscle function will remain. The positive flight control input which created the initial symptoms is likely to be involuntarily relaxed and this alone may be enough to lead to recovery of vision quickly enough to allow the pilot to regain positive control of the aircraft before this becomes impossible or terrain is too close for recovery to be effective. It is now thought that since a pilot in A-LOC remains conscious, cognitive and functional impairment are not accompanied by the loss of muscle tone and total incapacitation which occurs in G-LOC. Whilst in a state of A-LOC, it has been shown that a meaningful response to an easily comprehensible aural alert is still possible. However, transition through the A-LOC phase is not guaranteed - early findings in centrifuge experiments were that half the participating pilots lost consciousness at more or less the same time as they blacked out.

The Nature of the Risk

Absence of visually-discernable warning signs prior to G-LOC arises when the rapid onset of a high level of positive G is followed by continued flight at a sustained and still relatively high G level rather than an equally repaid return to much lower levels. In this context, “high” means - for an average pilot - somewhere in the vicinity of +6 and ‘continued flight at a high level’ means - again for an average pilot, more than +6 for more than about 4 seconds, since the latter is the time which eyes and brain can function normally using their store of oxygen without receiving a fresh supply of blood. This is illustrated in the diagram below. 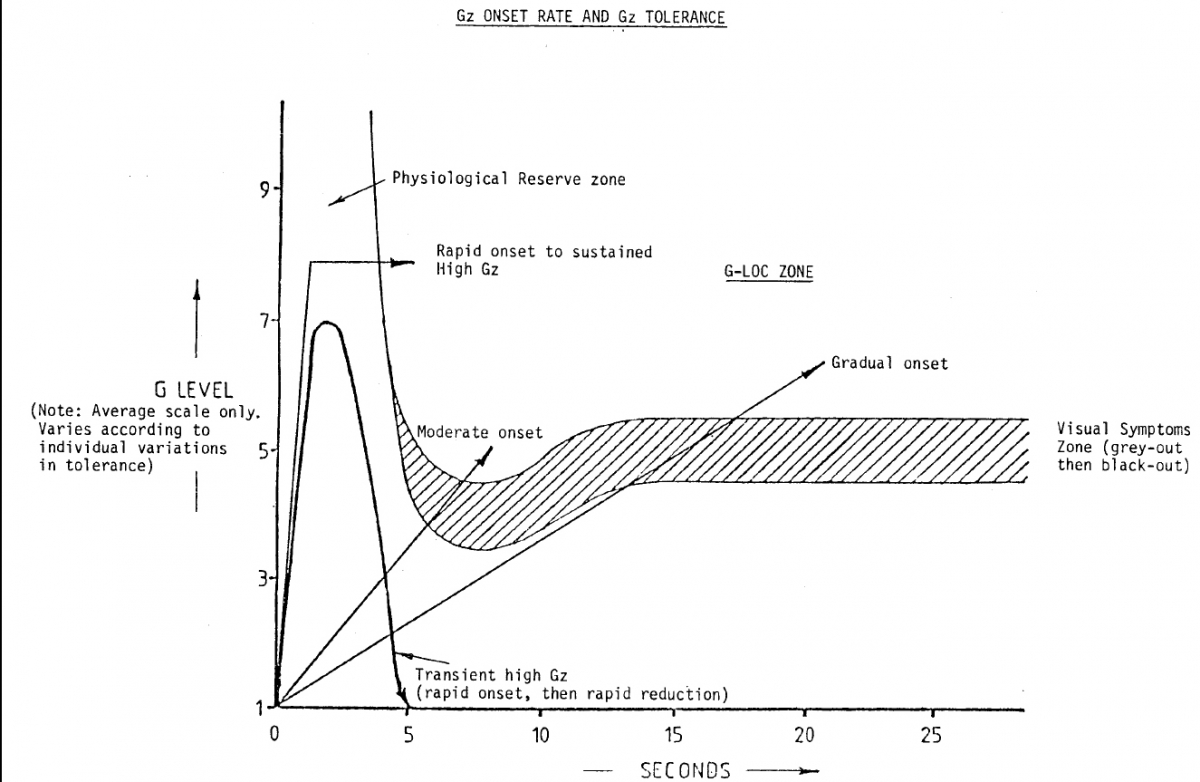 Whether or not visual cues of imminent G-LOC are encountered, the vulnerability of individual pilots to it varies. Since few civil pilots are likely to have access to a centrifuge to establish experimentally what their own limits are when the demonstrated effects of variable tolerance are taken into account, the reality for an individual pilot is that G-induced impairment can occur at much lower than the average figures for the triggering rate of high G onset and length of time for which high G is then maintained. It is known that additional danger may exist where a manoeuvre which involves even modest negative G is flown immediately before one in which a high rate of onset of positive G can be expected.

Also, tolerance is influenced not only by the inherent susceptibility of an individual pilot but by day-to-day changes in their general physical state caused by factors such as their level of tiredness, any use of even simple medication, the after effects of previous alcohol consumption, a low blood-sugar level, self-imposed or environmental stress, dehydration or demanding physical activity undertaken prior to flight. The extent to which the ‘normal’ G tolerance of a particular pilot can be modified by different training and fitness levels is still poorly understood in a civil context although it is considered highly probable that the range of tolerance amongst civilian aerobatic pilots is greater than that likely to be found in professional military fast jet pilots.

There are two measures which will directly reduce the effective level of exposure of exposure to high G:

There are two other measures which can increase the chances of recovery from A-LOC if visual warning signs do not occur before the condition occurs:

Prevalence and Evidence of G-induced Impairment

Whilst incidents of G-induced symptoms or impairment followed by successful recovery are relatively common, very few of them have been formally documented, even in military flying. Investigation of fatal accidents in which G-LOC or A-LOC is suspected as the cause are especially difficult because loss of consciousness immediately prior to a crash cannot be demonstrated by a post mortem examination and must instead be established by the rigorous exclusion of all other possibilities.