In 1998 a Flight Safety Foundation (FSF) Study concluded that the failure to recognise the need for and then execute a missed approach was an important contributor to approach-and-landing accidents, including but not limited to those involving controlled flight into terrain (CFIT)[1]. This Study found that only 17% of accident/incident flight crews had initiated go-arounds when conditions indicated that go-arounds should have been conducted. It was stated that the majority of go-arounds were made because of weather (forward visibility, ceiling (cloud base), wind velocity and turbulence).

This Study led to the creation of the Approach and Landing Accident Reduction Toolkit, in which Stabilised Approaches[2] and Being Prepared to Go-Around[3] were highlighted as two interrelated key elements for improving safety. Central to both them was the principle of decision-making becoming more closely guided by SOPs.

Since these recommendations were made, many aviation safety regulators have introduced a requirement for aircraft operators to define and apply Stabilised Approach procedures suitable for their operations, but this fairly recent development has been merely a recognition of best practice on stabilised approaches which had already begun to be adopted by leading operators outside the USA well before the FSF Study, especially in Europe.

In 2013 at the Go-Around Safety Forum (supported by SKYbrary)[4][5], more recent studies and analyses were cited by presenters. These studies indicate that:

Since current accident rates are so low (e.g. 1:2,000,000), the vast majority of these 97% unstabilised approaches self-evidently land without incident. However, perhaps not always considered by the pilots making these decisions to land (or not to go-around) is the substantial increase in risk when flying an unstabilised aircraft down the final approach.

This raises many questions, including:

These questions should be considered by aircraft operators against the picture painted by their own operational performance data, from both Flight Data Monitoring (FDM) (OFDM) Programmes and pilot self-reporting. Using this data, and the presentations from the Go-Around Safety Forum flight operations departments are encouraged to open discussions on this topic, including:

Procedural non-compliance usually precedes a violation and a violation often precedes an accident. So, why do pilots continue with unstabilised approaches instead of going around[6]? A number of explanations have been put forward:

Since many pilots have discovered that continuing and recovering from what is defined as an unstabilised approach so that a normal landing follows is likely can reinforce both personal and more widespread view that the procedures are unwarranted as specified. They may then be considered either as 'flexible' or as too restrictive and impractical. Some pilots may view the procedures as merely guidance which doesn’t need to apply to me right here, right now, in this particular situation. It may also be possible that the extant procedure is too complex and therefore difficult to use.

Because flying an approach to land is a dynamic process of continuous correction and decision making, there can be an undue focus (and this may be discussed between pilots during an approach) that there is always the option to go-around all the way to touchdown - which of course is true with or without stabilised approach procedures.

I don't agree with the detail of these procedures

Stabilised Approach 'Gates' where specific criteria must be met, vary considerably between operators, sometimes for entirely justified reasons. However, pilots who change employer may then encounter difference which they find are not satisfactorily explained by the operator. Even those who don't may feel that they haven't been given a credible explanation of the connection between the applicable SOP and safety. Stabilised approach gates vary in their number, their rigidity, the height above touchdown they are set at and whether they are different in different visibility conditions or for different types of approach. When asked in a recall survey to explain their behaviour, many pilots stated that they had been quite sure that they were capable of continuing safely whilst out of compliance with their stabilised approach criteria.[7]. It has been suggested too that encountering a situation which can destabilise an aircraft carries more risk if the physical and mental attention of the pilot is already focussed on flying an unstabilised approach. Since the pilot has already predicted that a safe landing will be possible, any additional complication such as a sudden adverse change in wind velocity may significantly impact on their capacity to react appropriately. It may even compound existing errors. If such a situation occurs very close to touchdown, then the time available to react will be just a few seconds and only a fully vigilant and attentive pilot will be able to react adequately.

I can see the runway

Being visual with your “goal” is a strong motivating factor in influencing a decision to continue, and when correcting from an unstable condition, it can be used to judge predicted progress quite efficiently. Therefore, seeing the runway and judging progress visually is how most pilots learned to fly, without any thought to meeting parameters such as rate of descent, drift angle, and heading. In fact when flying visually, it may be only power settings and speed that a pilot checks his instruments for regularly. However, it is interesting to note that just as many unstable approaches occur in Visual Meteorological Conditions (VMC) as they do in Instrument Meteorological Conditions (IMC),[8].

Commercial pressure and professional pride always appear somewhere in a pilot’s thinking (unconsciously or consciously) and this can influence the decision to continue or to go-around. Fir some pilots, this is implied by the tightly-defined fuel loading policies which are widespread these days.

For many pilots, go-arounds are rare events and the conditions that require a go-around decision rarely encountered. If pilots are not confident that they can fly a go around just as well as any other normal flight phase' then they are unlikely to be prepared to make a decision to go-around until they see it as inevitable - which is likely to make the transition to it much more difficult than if they had taken the decision at the most appropriate time. And whilst a thorough approach briefing [3] can help timely decision making, it does not guarantee it.

Without effective training, both in the classroom and in the simulator, the chances of a pilot automatically selecting go-around when it is the right option will be reduced. Decision making is often heavily biased towards the first option that comes to mind which is usually a continuation of the approach being flown.

It has been suggested that that the specific word “unstabilised” can have a subtle effect on pilot decision making. Simply in terms of definition, “unstable” means loss of equilibrium, or in layman’s terms “about to topple”. However, the majority of “unstable” approaches are anything but this as they pass the qualifying threshold. It may be difficult logically to associate “unstable” with a situation where, say the speed is 15 knots above Vref, the thrust is at flight idle, the rate of descent is 1000 fpm and or the land flap is still in transit as the aircraft passes 500 feet, especially if whichever of these apply are gradually trending to the criteria which will make the approach "stable".

Placing more emphasis on the option to go around above as well as below the formal challenges of the stabilised approach gate(s) may have at least three major beneficial impacts: 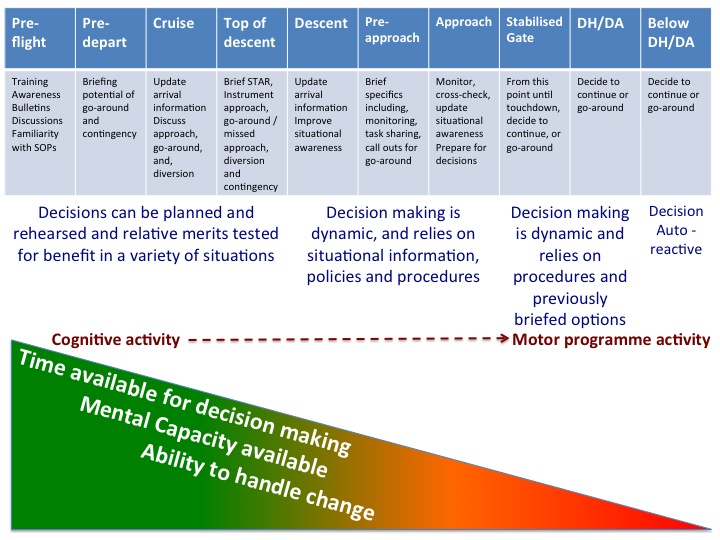 From the representative profile above, it can be seen that at the time and place a go-around decision is required, a dynamic (rapidly changing) situation is very likely. This in turn will occupy a large part of a pilot’s attention and cognitive capacity. In such situations, it has been proposed that potential decisions need to be “armed” ready to be to be triggered by previously-considered threats so that decision making becomes reactive and automatic.

Underlying each decision making phase, as shown, is an effective procedure which can be learnt and applied in training, discussed and refreshed during briefings and “triggered” automatically when required.

Stabilised Approach and go-around procedures and policies can be seen as the ultimate in pre-planning for decision making and van be seen as containing when X then Y, and, if A then B clauses. Such an approach can also encourage effective cross-monitoring and task-sharing, by reinforcing the concept that go-around decision making is a collective responsibility resulting in a “command”.

Central to effective go-around decision making is a comprehensive knowledge and understanding of situations, threats and circumstances that should, or may, require a go-around to be flown. Whilst a stabilised approach procedure may highlight the symptoms, it is the threats to flying a stabilised approach, threats preventing a safe landing and the threats to decision making capacity that need to be fully understood. Typical threats include:

Each of these threats presents a different decision-making scenario depending where the aircraft is on the approach (see decision making profile above). For example, some wind-shear, or a runway incursion, whilst the aircraft is still at 800ft may demand a different response than if they occur at 100ft. Knowledge and understanding of potential threats must include all stages of an approach, especially the part below DA/DH where, the pilot mind-set is that a landing will now be possible.

Having decided to go-around is not the end of decision making! Executing a go-around places the pilots and the aircraft in a new situation, perhaps one that is rarely practiced and which contains new threats. Over 60% of go-arounds introduce increased risk[10], this increases to over 70% where the pilots had a problem on approach.

The Findings and Conclusions from the June 2013 Go-Around Safety Forum held in Brussels contain many useful ideas for consideration including Strategies and Conclusions for various stakeholders. These conclusions are not necessarily recommendations, but are valuable for airlines to use as starting points to improve go-around decision making amongst their pilots. Some of these are summarised below.

Back to the Go-Around Safety portal