When a go-around is initiated with the aircraft in landing configuration (landing gear, flaps etc. extended) a loss of altitude is inevitable while the engine accelerates and the pitch change and increased power take effect.

However, if a go around is initiated when airspeed is already below the prescribed figure because engine thrust has been and remains too low, then it may already be unstable and recovery from such a situation necessitates careful handling as thrust is added and pitch attitude changed.

Low airspeed and/or thrust means that the altitude loss after selection of go-around thrust is likely to be more than in a normal situation. The illustration below, taken from the Briefing Note on Energy Management produced as part of the FSF ALAR Toolkit, illustrates this point. 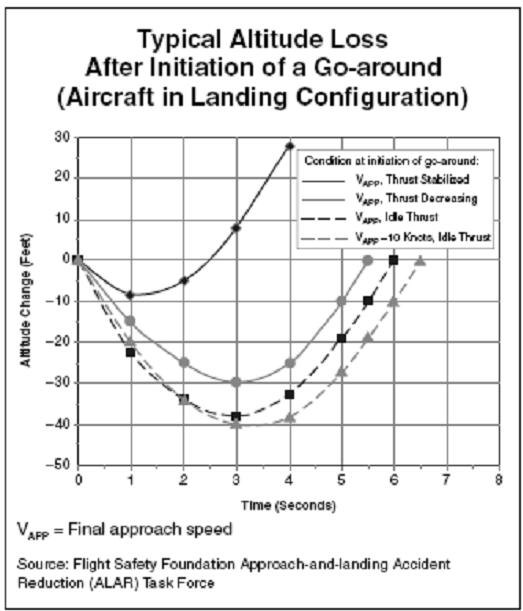 Typical altitude loss after initiation of a go-around

This Briefing Note states that deceleration below the applicable final approach speed should occur only during manoeuvres to achieve terrain avoidance, collision-avoidance or recovery from wind shear whilst noting that all three of these require the selection of TO/GA thrust.

On 29 March 2016, an Antonov AN-26B which had just taken off from Cox s Bazar reported failure of the left engine and requested an immediate return. After twice attempting to position for a landing, first in the reciprocal runway direction then in the takeoff direction with both attempts being discontinued, control was subsequently lost during further manoeuvring and the aircraft crashed. The Investigation found that the engine malfunction occurred before the aircraft became airborne so that the takeoff could have been rejected and also that loss of control was attributable to insufficient airspeed during a low height left turn.

On 23 September 2007, the pilots of a Thomsonfly Boeing 737-300 almost lost control of their aircraft after initiating a go around from an unstable low airspeed and low thrust condition reached progressively but unnoticed during an approach to Bournemouth at night. Mismanagement of the aircraft during the go around was attributed to a lack of adequate understanding of the aircraft pitch control system and led to extreme pitch and an aerodynamic stall but the crew subsequently recovered control of the aircraft and an uneventful second approach and normal landing followed.