Ground Effect is the name given to the positive influence on the lifting characteristics of the horizontal surfaces of an aircraft wing when it is close to the ground. This effect is a consequence of the distortion of the airflow below such surfaces attributable to the proximity of the ground. It applies to both fixed and rotary wing aircraft.

The increase in Liftlift created by Ground Effect comes primarily from a reduction in the amount of induced drag generated which improves the lift/drag ratio. In most circumstances, this increased lift is supplemented by a direct increase in the lift generated by the wing.

The reduction in induced drag - so called because it is a function of the lift generated by the wing - occurs at the wing tip. When generated in proximity to the ground, the form of the wing tip vortex, which is always generated when an aerofoil moves through the air, because pressure beneath a wing is always higher than that above it, is modified. Instead of being circular, vortices in proximity to the ground become elliptical as the airflow is pushed outwards. This causes the effective aspect ratio of the wing to become greater than the geometric aspect ratio and reduces induced drag. Both lift (and airspeed for any given engine power setting) are increased.

The direct effect on lift arises because a reduction in both upwash and downwash, as the air beneath a wing is compressed by ground proximity, creates a cushion effect. The effect is proportional to the chord of the wing but the extent to which it occurs is dependent upon the profile of the lower wing surface. If this lower surface is markedly convex, and the angle of attack is small, then the effect on lift eventually becomes negative.

The overall effect of an improved lift/drag ratio when a wing is in ground effect is that a given amount of lift will be produced at a lower angle of attack than would be required in free air.

In ground effect, the angle of attack required before a wing stalls, for a given amount of lift, is reduced. The extent of this decrease in stalling angle of attack will vary according to the nature of the aerofoil, but can be several degrees. The difference will also be affected by any reduction in the maximum lift coefficient of a particular wing in ground effect, compared to that coefficient in free air. 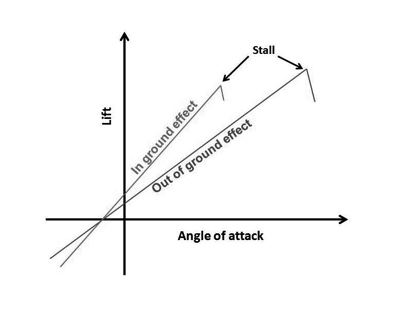 A similar increase in the lift generated in ground effect, compared to free air, applies to a rotary wing when in the hover for essentially the same reasons identified for the fixed wing case. Proximity to the ground alters the velocity of the downwash so that a reduced angle of attack is required to sustain a hover. This leads to a reduction in induced drag, attributable to the reduced angle of attack, and decreases the power required. In addition to this, rotor blade tip vortices are similarly affected by ground proximity - they are forced outwards so that the outboard portion of the blade functions more efficiently and the turbulence caused by recirculation of the vortices is reduced. As with the fixed wing case, the overall effect of an improved lift/drag ratio when a rotary wing is in ground effect is that a given amount of lift will be produced at a lower angle of attack than would be required in free air.

The Extent of Ground Effect 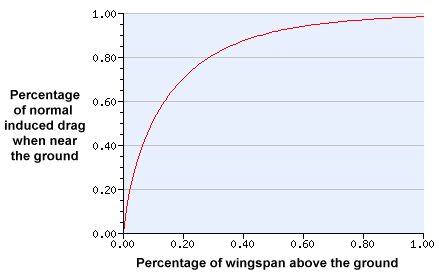 Decrease in induced drag due to ground effect.

Taking the wing span of a fixed wing aircraft which is usually expressed in metres and converting it to feet as usually used for measuring height above the ground, it is worth noting that wing spans of most modern twin aisle aircraft are typically around 200 feet and those of most single aisle jets and large turboprops are typically in the range 100-120 feet. In the rotary wing case, typical rotor diameters of larger helicopters are typically in the range 55 to 60 feet.

Ground effect is maximised in calm wind conditions and over a smooth and level hard surface. The effect over grass, an uneven surface and sometimes over water is likely to be much less. Not surprisingly, fixed wing aircraft with low wing fuselage attachment receive maximum ground effect.

In normal flight operations, awareness of ground effect is important during the landing flare since it will exacerbate any tendency of an aircraft to float if either airspeed over the threshold or pitch control is not optimum. It is also taken into account in Fly-By-Wire system design in respect of the normal law transition from flight to ground status and vice versa. Also, it has been suggested that wake vortices descending into ground effect may not necessarily move laterally away from the runway upon reaching it as usually stated but can rebound. The existence of this effect has not been reliably substantiated - but neither has it been proved not to occur, so it is sometimes recommended that landing an aircraft significantly smaller than the preceding one in calm conditions should be accompanied by a degree of caution if landing beyond the previous aircraft touchdown position, even if wake vortex separation criteria are met. On the same basis, a landing or take off soon after a much larger aircraft has landed or rotated for take off on an intersecting runway may invite similar considerations.

In the case where either rotation for take off or an attempt to conduct a go around after touch down is initiated at too low a speed for the aircraft configuration or weight, ground effect may lead to an initial airborne state which cannot be sustained as distance from runway surface increases and the lift premium from ground effect reduces. However, it may be possible in some of these cases to accelerate in ground effect to attain a speed compatible with flight in free air before pitching up and leaving ground effect.

For the rotary wing case, the main interest is the reduced power required to hover in ground effect (IGE) compared to in free air and the significance of the transition to or from free air in respect of control. The implication of IGE hover taxiing are that the increased outflow ‘distortion’ of the blade tip vortices may disturb adjacent unsecured ground equipment and/or cause the control surfaces of adjacent parked fixed wing aircraft to be forced against their stops with a potential for damage.

Two examples of events in which the consequences of the reduced angle of attack at which an aerodynamic stall will occur in ground effect compared to free air affected the activation of the stall protection system during take off when the leading edge configuration unexpectedly changed are:

An example of an attempt at a go around from too low an airspeed to sustain a climb in free air but with enough lift in ground effect to fly clear of the surface until rising terrain and obstructions intervened is:

The Report of the NTSB Investigation into a fatal flight test accident in which the difference between the stalling angle of attack in and out of ground effect was found to have been a critical factor is: