Harmattan, is a cool dry wind that blows from the northeast or east in the western Sahara and is strongest from late November to mid-March. It usually carries large amounts of dust, which it can transport hundreds of miles out over the Atlantic Ocean; the dust often interferes with local aircraft operations. 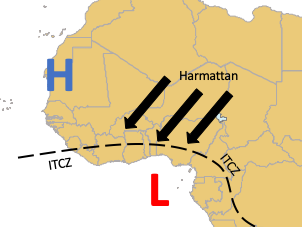 During the winter or low sun period in the tropics, the Inter Tropical Convergence Zone (ITCZ) drops southward across northern Africa toward the Gulf of Guinea. A subtropical ridge of high pressure is over the central Sahara Desert. The Northeast Trade Winds to the north of the ITCZ also drop southward, now blowing across the Sahara Desert towards the countries that border the Gulf.

The Harmattan is part of the Northeast Trade Wind circulation strengthened by a low-pressure centre over the north coast of the Gulf of Guinea and a high-pressure centre located over northwestern Africa in winter. The Harmattan extends down to 5 degree N. The Harmattan’s arrival may cause air temperatures in parts of western Africa to fall to 9 °C (48.2 °F). In the summer it is undercut by the cooler winds of the southwest monsoon, blowing in from the ocean and forcing the Harmattan to rise to an altitude of about 900 to 1,800 metres (about 3,000 to 6,000 feet). The interaction between the Harmattan and the monsoon sometimes produces West African tornadoes.

In the summer, everything shifts northward and the Harmattan moves to 15 degrees N. The air from the desert is hotter and is undercut by the cooler winds of the southwest monsoon, blowing in from the ocean and forcing the harmattan to rise to an altitude of about 900 to 1,800 metres (about 3,000 to 6,000 feet). This interaction between the Harmattan and the monsoon sometimes produces West African tornadoes.

The Harmattan blows during the dry season, which occurs during the lowest-sun months. On its passage over the Sahara, the Harmattan picks up fine dust and sand particles (between 0.5 and 10 microns)

It is characterized by cold, dry, dust-laden wind, and also wide fluctuations in the ambient temperatures of the day and night. Temperatures can easily be as low as 9 °C (48 °F) all day, but sometimes in the afternoon the temperature can also soar to as high as 30 °C (86 °F), while the relative humidity drops under 5%.

The Harmattan brings desert-like weather conditions: it lowers the humidity, dissipates cloud cover, prevents rainfall formation and sometimes creates big clouds of dust which can result in dust storms or sandstorms. The wind can increase fire risk and cause severe crop damage.

The Harmattan should not be confused with the Saharan Air Layer, a summer phenomena when dust laden Sahara air at higher levels is transported fully across the Atlantic.

In some countries in West Africa, the heavy amount of dust in the air can severely limit visibility and block the sun for several days, comparable to a heavy fog. This effect is known as the Harmattan haze. It costs airlines millions of dollars in cancelled and diverted flights each year. When the haze is weak, the skies are clear.

Humidity drops to as low as 15%, which can result in spontaneous nosebleeds for some people. Other health effects on humans may include conditions of the skin (dryness of the skin), eyes, and respiratory system, including aggravation of asthma. The dry dusty air can lead to the onset or worsening of cardiovascular diseases.