Holding patterns are flown as a delaying tactic, be it for ATC requirements such as airspace saturation or approach delays, as the published termination of a missed approach procedure to be flown whilst coordinating further clearance, at pilot request to allow time for completion of abnormal or emergency checklist procedures or at any other time that a delay in flight progress is required. Under Instrument Flight Rules (IFR) pilots are expected to adhere to proscribed holding procedures inclusive of speed, hold entry procedures, timing and rate of turn, as the protected airspace for the holding pattern, and thus separation from other traffic, is predicated on those procedures.

A standard holding pattern is depicted in the following diagram which shows the ground track as it would appear in still-air conditions. The holding "fix" can be any of a VOR, a NDB, a radial/DME fix, a specified waypoint or, in some circumstances, the current aircraft position as generated by the Flight Management System (FMS).

After the completion of the appropriate procedure to enter the hold, all turns in a standard pattern are to the right. During entry and holding, pilots manually flying the aircraft are expected to make all turns to achieve an average bank angle of at least 25˚ or a rate of turn of 3˚ per second, whichever requires the lesser bank. The inbound leg is flown following the assigned radial or bearing to the fix whilst the ground track for the outbound leg is adjusted for the wind conditions to facilitate the turn to intercept the inbound track. The outbound leg is flown for the appropriate time interval to achieve the regulated inbound timing. Inbound timing for a standard hold is one minute when at or below 14,000' and one and a half minutes when above 14,000'. When the pilot receives ATC clearance specifying the time of departure from the holding fix, adjustments should be made to the flight pattern within the limits of the established holding pattern to leave the fix as close as possible to the time specified.

Entry sectors for a standard holding pattern are depicted in the following diagram. Note that there are three entry sectors based upon the heading at which the aircraft approaches the holding fix. Note also that there is a zone of flexibility of 5˚ on either side of each boundary; that is, within the zone, the entry procedure appropriate to either side of the boundary can be executed at the discretion of the pilot. 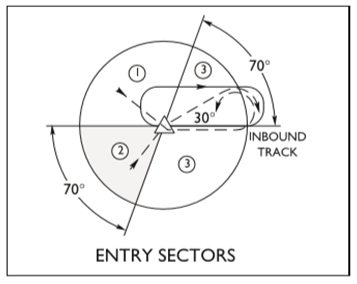 DME holding is subject to the same entry and holding procedures as a standard holding pattern except that distances, in nautical miles (NM), are used in lieu of time values to define the limits of the holding pattern. In describing the direction from the fix on which to hold and the limits of a DME holding pattern, an ATC clearance will specify the DME distance from the navigation aid at which the inbound and outbound legs are to be terminated. The end of each leg is determined by the DME indications. Conversely, when the aircraft is FMS equipped, a pilot might be cleared to hold at a defined waypoint on a specified track with a specific leg distance expressed in NM.

The expected holding speed for many charted holding patterns is published on the associated enroute, terminal or approach chart. In cases where a speed is not specified, holding patterns must be entered and flown at or below the appropriate airspeed for the holding altitude. These speeds can vary from region to region so pilots must be aware of the limitations in force for the area in which they are operating. International Civil Aviation Organisation (ICAO) maximum holding speeds are as follows:

A holding clearance issued by ATC will include at least the following items:

For example, "BA123 is cleared direct the SHA VOR, descend to and maintain FL180. Hold South East on the 140 degree radial. Expect further clearance at 1035Z". If the holding procedure is charted, the clearance can be abbreviated to exclude the published information. "BA123 cleared to OLLNO, hold as published, maintain FL120. Expect approach clearance at 2215Z".