The estimated time that deicing/anti-icing fluid will prevent the formation of frost or ice and the accumulation of snow on the critical surfaces of an aircraft.

Holdover time (HOT) begins when the final application of deicing/anti-icing fluid commences and expires when the deicing/anti-icing fluid loses its protection effectiveness. It is determined by the extent to which it is expected that applied fluid will remain active on the aircraft surfaces; active fluid must be able to provide protection from the accretion of frozen or semi-frozen contaminants in the prevailing conditions. Holdover Time begins at the start of the anti icing operation. If a two-step operation is used, then it begins at the start of the final (anti-icing) step. By definition therefore, holdover time will have effectively run out when frozen deposits start to form or accumulate on treated aircraft surfaces.

Due to their properties, Type I fluids form a thin liquid wetting film, which provides only an extremely limited holdover time, especially in conditions of freezing precipitation. With this type of fluid, no additional holdover time can be obtained by increasing the concentration of the fluid in the fluid/water mix.

For ‘thickened fluids’ of Type 2, 3 and 4, their pseudo-plastic thickening agent enables the fluid to form a thicker liquid wetting film on aircraft surfaces which can then provide a significantly longer holdover time, especially in conditions of continuing freezing precipitation. With this type of fluid, additional holdover time will be provided by increasing the concentration of the fluid in the fluid/water mix, with maximum holdover time available from undiluted fluid. 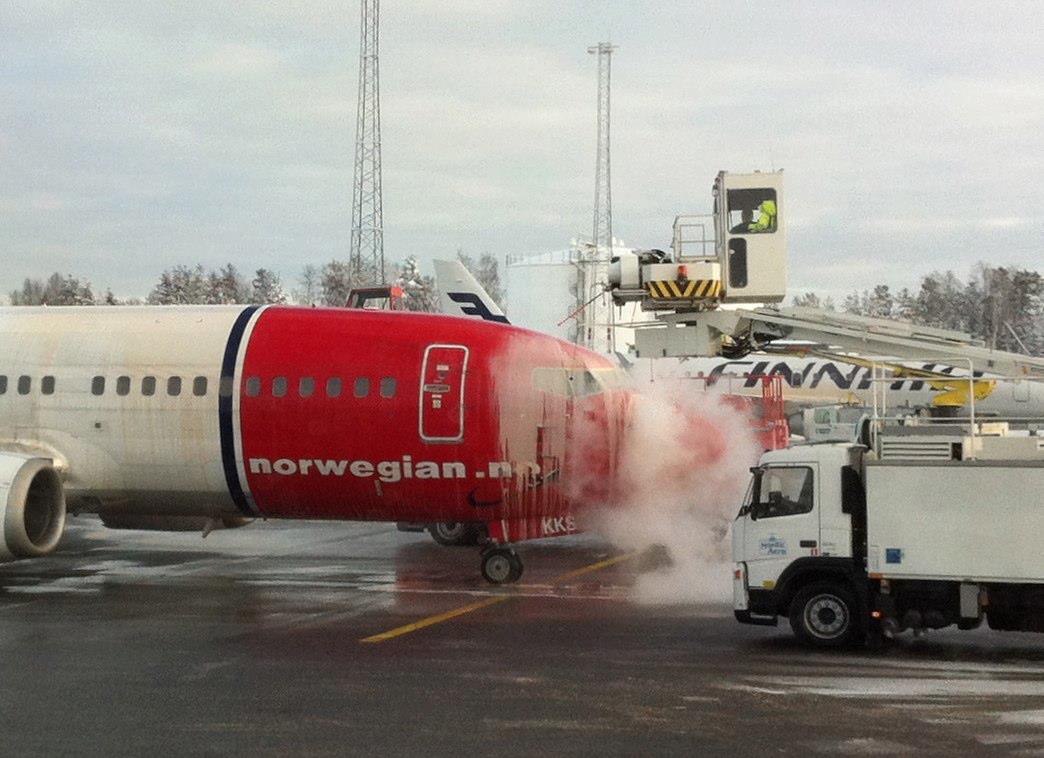 Heavy precipitation rates or high moisture content, high wind velocity or jet blast may reduce holdover time below the lowest time stated in the range and holdover times may also be reduced when aircraft skin temperature is lower than outside air temperature.

Holdover time guidelines are published generically for the defined fluid Types 1, 2, 3 and 4 but are also sometimes given for individual fluid products. These “brand name” holdover times will be found to differ from the generic tables. There are no holdover times for Heavy Snow, Hail (defined as ice pieces between 5 and 50mm diameter), Snow or Ice Pellets (defined as hail of less than 5mm in diameter) and Moderate or Heavy Freezing Rain.

These are then reviewed by the FAA, and TC (Transport Canada) who are the main practical sources of HOT information and each issues their own version of the HOT Tables and associated support publications independently of each other and SAE. The generic changes from one season to the next are usually relatively few. However, in recent years, issues with residues from thickened fluids have been the main driver for the appearance of product-specific HOT tables, which are increasingly used by operators.

Other "official" sources sometimes publish HOT which are then left as "current" when they cease to be the latest versions. The effect of such out of date information being still accessible has resulted in many Operations Manuals being out of date on this critical safety subject.

In recent years, several companies have been developing systems that measure precipitation rate in real-time. These systems, referred to as liquid water equivalent systems (LWES), can be used by check-time determination systems (CTDS) and holdover time determination systems (HOTDS) to calculate more precise holdover times than can be obtained from the HOT Tables. They do this by using the weather data they collect as the input to the underlying assumptions employed in calculating the times in the HOT Tables.

Note: Although the AEA ceased to exist in 2016, the most recent of their publications still contain some pertinent information. Readers are cautioned to validate the recommendations of these guidebook using more current information sources.