Jet Efflux Hazard is defined as hazards associated with the blast force generated behind a jet engine. The hazard exists whenever a jet engine is running but is increased and extends over a greater area and at greater distance behind the engine, at high engine power settings when taxiing, before and during take-off, and during engine maintenance activity.

Operationally, jet efflux can be hazardous in three ways:

Whilst these risks are ever-present and generally recognised within the ramp environment, when there is a specific hazard then signage and or NOTAMs are usually provided. Flight crews should check these and always use the minimum ‘breakaway’ thrust to commence moving.

However, what is not generally recognised are the hazards that may be created when away from the ramp environment. Two specific hazards to aircraft safety are particularly important:

The exhaust of a running jet engine always creates an efflux/blast. In being aware of this risk, flight crews should always consider the following:

Aircraft at risk from jet efflux/blast:

A more detailed review of this hazard with examples can be found in the separate article "Applying Take-off Thrust On Unsuitable Pavement Surface May Have Hidden Dangers" (see Further Reading). 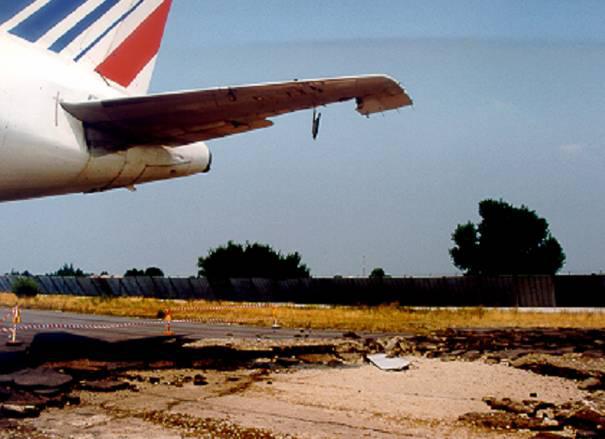 A320 elevator severely damaged after an engine run up. The surface of the taxiway was not able to resist the engine blast at take-off thrust. Number of smaller chunks weighing several kilograms each were dislodged and projected at high speed into the horizontal stabilizer, ripping out pieces of composite material that were later found on the over-run area. Source: Air France

Significant damage was caused to the tailplane and elevator of a Boeing 737-400 after the pavement beneath them broke up when take off thrust was applied for a standing start from the full length of the runway at Aberdeen. Although in this case neither outcome applied, the Investigation noted that control difficulties consequent upon such damage could lead to an overrun following a high speed rejected takeoff or to compromised flight path control airborne. Safety Recommendations on appropriate regulatory guidance for marking and construction of blast pads and on aircraft performance, rolling take offs and lead-on line marking were made.