Jet Stream is defined as a flat tubular current of air, quasi-horizontal, whose axis is along a line of maximum speed and which is characterised not only by great speeds but also by strong transverse (horizontal and vertical) gradients of speed (World Meteorological Organisation).

The two major areas of Jet Stream activity in the upper troposphere are the Sub-Tropical Jet Streams near the 30 degree latitudes and the Polar Jet Streams in mid-latitudes. Both are predominantly west-east. There is also a jet stream of predominantly east-west flow over equatorial land masses, and a belt of strong winds in the stratosphere over the winter pole, the "polar night jet", at high latitudes and above FL600, or the 50 hPa level.

A Jet Stream can be several thousand miles long, but only a few hundred miles wide and a few thousand feet in depth. The winds in a Jet Stream are not constant, nor is the direction always west-east. Jet Streams can intensify or die out and therefore the forecasting of Jet Stream location, direction and strength is not as precise as aviators would like when planning long range intercontinental flights.

The Sub-tropical jet Stream is located entirely within the tropical air mass and is not associated with any surface fronts. Its location is less variable than the Polar Jet Streams, and its altitude is at around the 200 hPa level.

The Equatorial Jet Stream, located at approximately FL500, or around the 100 hPa level, flows intermittently east to west across Asia and Africa but does not extend into the Atlantic. It is at its strongest in the months of July and August.

A second jet stream sometimes forms over Africa, underneath the Equatorial Jet Stream. Large cumulonimbus clouds can form around this jet, moving out into the Atlantic ocean, developing further and, if the sea temperatures are warm enough, can trigger the development of a hurricane

To be considered a Jet Stream, the accepted minimum speed limit is 60 knots. The speed of the Jet Stream is typically 100 kts (nautical miles per hour) but can reach 200 kts over North America and Europe in the winter. Speeds of 300 kts are not unheard of, particularly over south-east Asia.

In areas north of the Alps, in the Bavaria regions of Germany, low level jet streams may arise due to the dynamics of the wind structure in that area, especially with winds from the east. 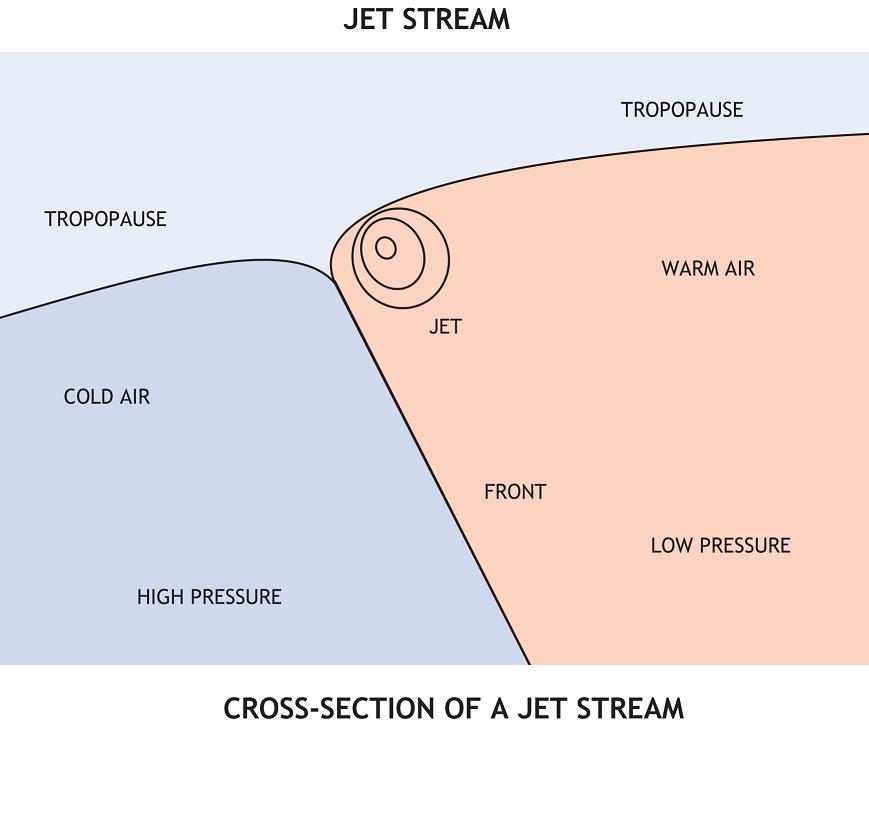 The location of the Polar and Sub-Tropical Jet Streams is influenced by climatic variations such as El Niño and La Niña.