Kelvin-Helmholtz waves are vertical waves in the atmosphere generated by wind shear. If enough moisture is present, a characteristic cloud, the Kelvin-Helmholtz wave cloud (also known as Fluctus), can be formed. The wind shear is the result of stronger upper winds being separated from weaker lower winds by a stable layer between. This thermodynamically stable layer is typically a temperature inversion.

When the upper layer of air is moving at a higher speed than the lower level air, it may scoop the top of an existing cloud layer into these wave-like rolling shapes. The clouds themselves occur within the stable layer at altitudes above 16,500 ft. 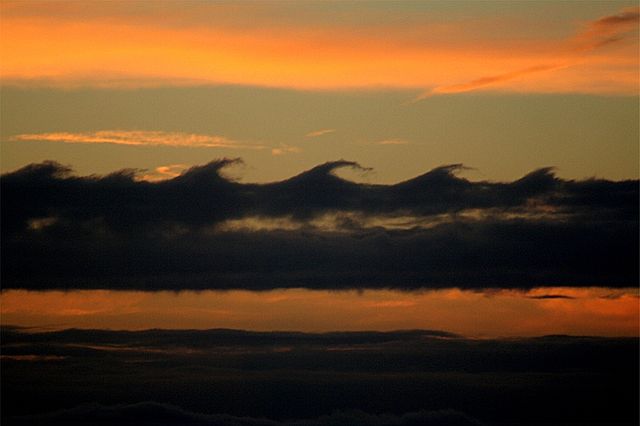 The Kelvin–Helmholtz instability (after Lord Kelvin and Hermann von Helmholtz) can occur when there is velocity shear in a single continuous fluid, or where there is a velocity difference across the interface between two fluids. An example is wind blowing over water: The instability manifests in waves on the water surface. More generally, clouds, the ocean, Saturn's bands, Jupiter's Red Spot, and the sun's corona show this instability. 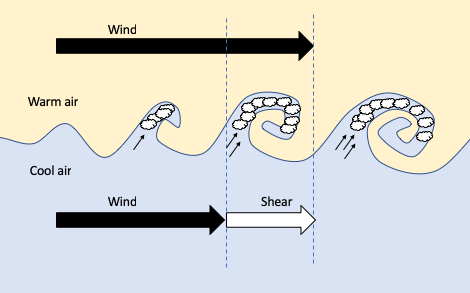 When the rising cooler air is moist, under the correct conditions, cloud forms in the crest of each wave. To the viewer on the ground, these appear as parallel bands of cloud. The waves break on top into cloud rolls. The axes of the cloud rolls are perpendicular to the wind shear.

The presence of Kelvin-Helmholtz wave cloud is a useful indication of wind shear and turbulence. Vertical soundings can also be examined to show the vertical wind profile and the existence of any stable layers. Kelvin-Helmholtz waves are most commonly found but not limited to mountainous regions. Pilots should avoid flying at the altitude where these clouds are forming and should expect and prepare for turbulence if they have to fly through the boundary between two airstreams, for example during climb or descent.