This briefing note suggests topics and strategies that can be effective when training flight crews about coping with fatigue related to jet lag. The primary focus is on helping crews learn how to limit sleep loss before return flights in eastward and westward rotations that include a layover. The briefing note provides an overview of key factors that influence jet lag and offers recommendations for training on:

It is important for flight crews to understand the causes of jet lag and the subsequent performance issues related to it. Aviation training should emphasize that jet lag is a combination of symptoms caused by rapidly traversing across time zones. Crews should understand that jet lag is more than just fatigue. Besides fatigue, symptoms include sleepiness, digestive upsets, impaired judgement, impaired decision making, memory lapses, irritability and apathy.

Trainees should have a good understanding of the fact that each person has an internal body clock that schedules when sleeping, waking and hunger should occur within a 24-hour period. It is important for a trainee to understand that when traveling across several time zones, the day actually becomes longer or shorter than 24 hours because of time changes. Jet lag is the body’s reaction because it cannot adjust the normal body rhythms quickly to the shorter or longer day. The body needs anywhere from a few days to a few weeks to acclimate to the new time zone, or approximately one day for each hour of time zone change.

Training should incorporate the idea that jet lag is not the same for all travel situations. Traveling eastward, which shortens the day, is more difficult than flying westward, which lengthens it. This is because it is much easier for a person to stay awake later (as needed for westward flight) than it is to go to bed early (as needed for eastward flight). Once a crewmember has arrived at the layover destination, how much he or she adjusts to local time depends on the number of local nights during the layover. Training should use the information below and have trainees practice calculating the number of days needed to adjust to local time and when to use the various strategies to avoid jet lag and its related symptoms.

A trainee needs to understand how the number of time zones crossed and the direction of travel affect the biological clock. Information covered in training should focus on how the extent of the shift between the biological night and the local night plays an important role in determining layover sleep and nap management. Four categories have been created based on the direction of flight and the number of time zones crossed (TZC) during the flight. These include:

Understanding these time shifts and how they relate to normal base time and local time sleep schedules is very important to prevent jet lag.

A flight crewmember should know the advantages or disadvantages of taking his or her main sleep on base time or local time. The following information is designed to help trainees avoid, or minimize, sleep deprivation prior to the return flight. Depending on the timing of the return flight, the recommendations will favor layover or base time rest and activity management. In some cases, particularly when the return flight includes either a local or base night, pilots can choose between which sleep and nap strategies they would like to use based on the relative advantages and disadvantages of each.

Trainees should understand that they must decide which strategy they prefer to adopt based on the duration of the layover in terms of the number of local nights and the number of time zones crossed (see Figure 1). 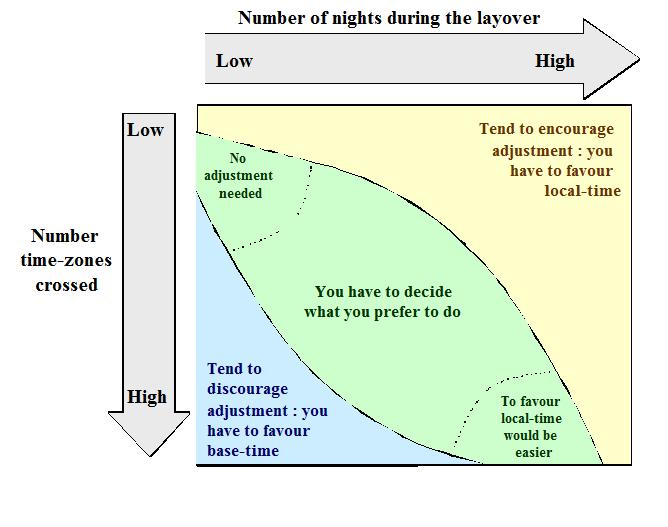 Specific factors to be considered include:

Trainees should practice using the The Layover Assessment Adjustment Questionnaire (LAAQ) included in the OGHFA materials to help determine adjustment to local time.