Landing Distance Available (LDA). The length of the runway which is declared available by the appropriate Authority and is suitable for the ground run of an aeroplane landing.

Landing Distance at time of arrival (LDTA). Means a landing distance that is achievable in normal operations based on landing performance data and associated procedures determined for the prevailing conditions at the time of landing.

Put simply, the LDR must be less than the LDA.

Already within the dispatch phase of a flight the flight crew has to assess the landing performance of the aircraft both at the destination and the alternate aerodromes (including destination alternate(s), enroute fuel alternate or re-dispatch/re-clearance aerodromes). This is primarily done by determining the landing field length limited weight which in addition to the landing distance consideration also includes missed approach climb gradient considerations. This weight should allow a landing which brings the aircraft to a complete stop within 60-80% of the LDA in dry conditions (depending on aircraft type) and within 115% of the dry-LDA in wet conditions using the most favourable (longest) runway, however assuming maximum manual brake application.

On top of that flight crews are also required in the dispatch phase to make a runway suitability check by additionally calculating the LDTA for the most likely to be assigned runway taking into account the actual kind of brake application used (e.g. selected autobrake setting), which in marginal cases with wet, slippery wet or contaminated runway conditions may exceed the LDA. In such cases dispatch is only allowed with one or even two alternate aerodrome(s) where a safe landing based on a LDTA assessment can be made.

Inflight, which means enroute, but not more than 30minutes prior to expected arrival, another assessment of LDTA for both, destination and alternate aerodrome(s), has to be performed by the flight crew to determine the operational LDR. These values shall include a 15% safety margin.

As mentioned before regulations specify safety factors that must be applied in determination of the landing field length limit and the LDR (see further reading). In general the LDR depends on a number of factors, principally:

Aircraft performance (LDR and landing speed) is calculated by the pilots using printed tables or a computer or an Electronic Flight Bag application. This calculation takes account of the above factors, including additional safety factors. It is assumed for these calculations that the aircraft will be at a specified height (normally 50 ft) crossing the runway threshold at the correct speed, and that aircraft handling will be in accordance with procedures detailed in the AFM and company SOPs.

Safety factors vary according to the aircraft type (turbo-jet or turbo-prop), the runway conditions (dry, wet, slippery wet or contaminated). Special provisions apply to steep approaches and to short landing operations including specific approval requirements from the competent authority.

Landing an aircraft is a difficult process requiring considerable manual dexterity. The pilot or, int he case of multi-crew aircraft, the flight crew must achieve the following goals:

Unserviceability of any of the devices which affect the aircraft braking (brakes, anti-skid, reverse thrust, lift-dump, etc.) can have a serious effect on landing performance. Note: Dry and wet (including damp surfaces) landing performance calculations usually assume that reverse thrust is not available while slippery wet or contaminated performance calculations may, depending on aircraft certification, assume full reverse thrust available. Considerations for an engine failure during landing flare leading to a reduced deceleration capability might also be applicable in the certification process.)

Major unserviceability (e.g. engine malfunction) complicates handling considerably; however, any unserviceability, even if not serious on its own, may add to control difficulties.

The complexity of the landing task (even with Autoland) is such that even in ideal conditions, a perfect landing is virtually impossible, while any deviation from the ideal adds to the actual landing distance needed.

The maximum landing mass and the LDR greatly depends on the runway braking conditions. If these have been inaccurately reported or if the runway is wet, slippery wet or contaminated when its condition was reported as being dry, the landing distance achieved will be significantly increased.

The presence of runway contamination such as standing or running water, snow, slush or ice on the runway has a particularly serious effect on landing performance and if it cannot be cleared, it must be reported as accurately as possible using runway condition codes (RWYCC) as given by the Global Reporting Format. Special techniques must be used by pilots when landing on contaminated runways.

The maximum landing mass is also calculated based on the expected wind and temperature. Significant changes to the reported conditions will affect the landing distance achieved, especially in the case of tailwinds.

Effect of Factors on Landing Distance 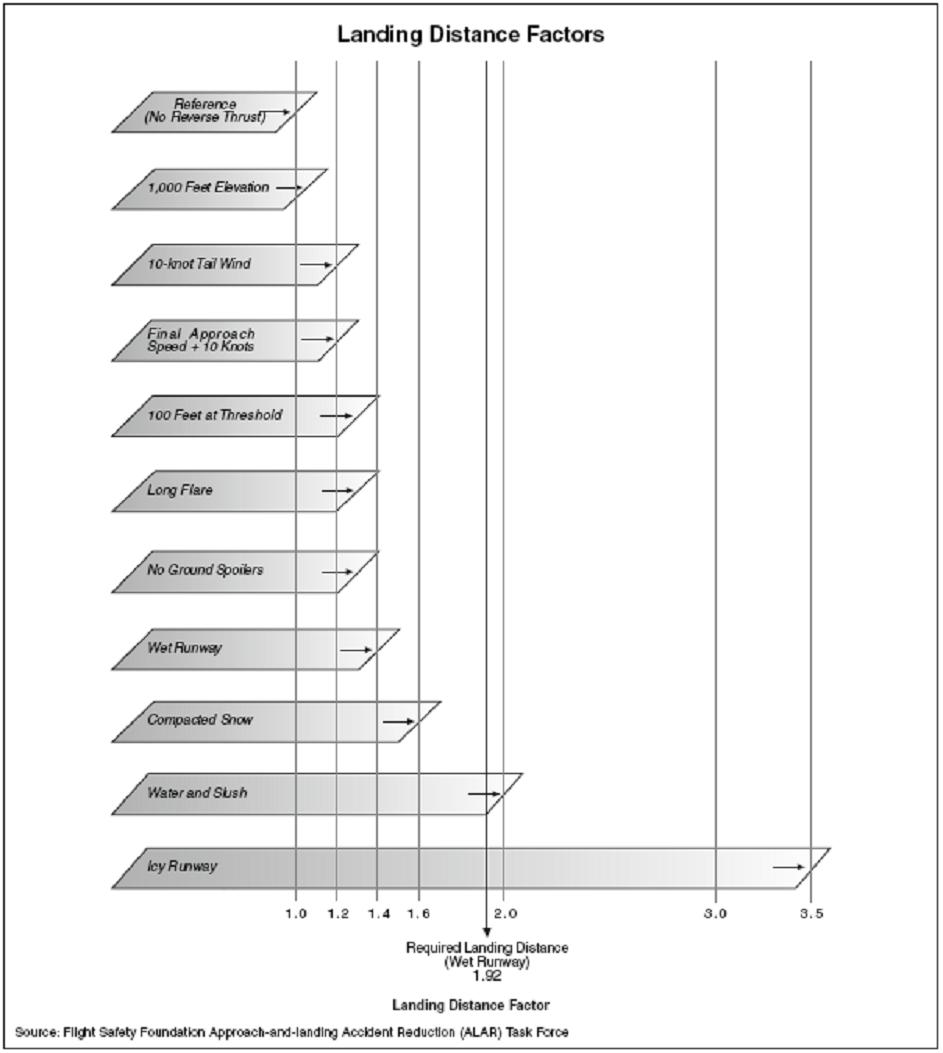 The ICAO provisions are contained in Annex 14, Volume 1, Attachment A, Volume 1, 3. Calculation of declared distances: 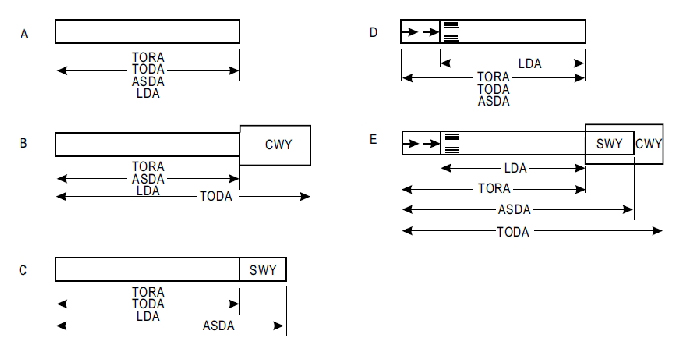 Some runways are also fitted with an EMAS adjacent to the runway end. However, as this is an additional safety feature intended to mitigate the effects of a possible lateral runway excursion (overrun) only, it may not be taken into consideration for when determining the landing distance available.