A person’s Level of Arousal can be described as a function of alertness, situational awareness, vigilance, level of distraction, stress and direction of attention. In effect, how ready a person is to perform appropriate tasks in a timely and effective manner.

Extreme under-arousal is manifest by unconsciousness, possibly caused by tiredness, fatigue, hypoxia, poisoning or other illnesses.

Extreme over-arousal can be manifest by a range of symptoms that will be peculiar to the individual, the environment, the task and other factors. Such symptoms may include: panic, aggression, submission, resignation, withdrawal, irrational behaviour and mood swings, as well as unconsciousness.

Somewhere in between the two extremes, a point of optimum-arousal, which is appropriate and effective for the situation, will exist allowing for optimum performance. At this point it seems that our mental capacity, situational awareness, alertness, attention, vigilance, decision-making, and actions are all heightened in sensitivity and execution – we are in the zone.

Our performance at work is also affected directly by the number, complexity and intensity of stressors present and the amount of subjective stress that we are experiencing. There is also a direct relationship between stress and arousal. It is therefore useful to connect levels of arousal with levels of stress. The Yerkes-Dodson Stress Curve is a simplification that can help to explain the relationship between arousal and performance. 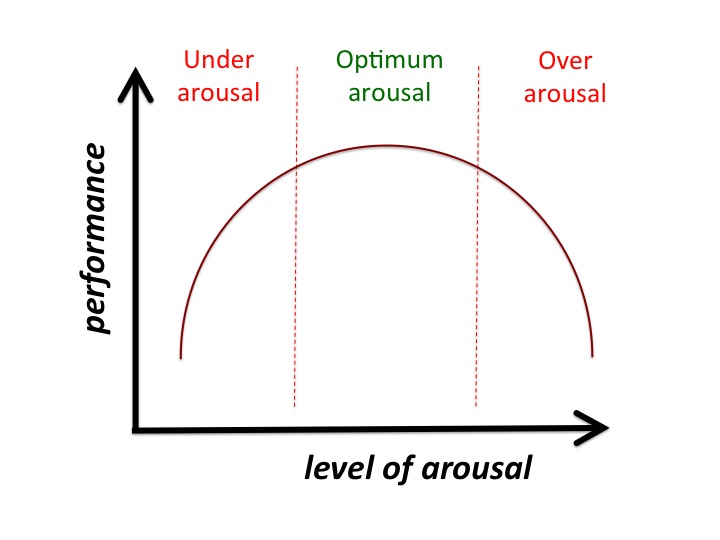 At low levels of arousal, our performance level is also low. This may be a well-balanced situation where we are relaxing and not expecting to perform to any degree of skill nor exert any energy or brain-power. However, when due to fatigue or lack of motivation the performance level achieved does not match the performance level required, we are liable to miss information, omit actions, to be less vigilant, scan insufficiently, make mistakes and react much slower to changes. Two specific examples of under-arousal are important enough to highlight here:

Some stressor(s) are required to rouse us from a low level of arousal into the optimum zone. Such stress is often referred to as eustress – or, good stress. Eustress is less a description of the situation and stressors present, but refers more to the motivational aspect of stress and an ability to change our perception of the situation (from one of disinterest at one end of the scale and from one of fear at the other) to interest and engagement. It is a positive cognitive response to stress that is healthy, or gives one a feeling of positive fulfilment[2]. It is in this portion of the curve that we are more likely to perform effectively, making fewer errors, better decisions and reacting quickly to changes.

When arousal is too high, perhaps due to overload, then once again we start to make more errors, find it harder to be decisive and take longer to react (if at all). One characteristic of over-arousal is our tendency to narrow attention and focus, such that other information is ignored or just not sensed. It is not always the most critical element that we dedicate full attention to either, as we become incapable of assessing risk and allocating priorities. We may sub-consciously put full attention only onto a task that we know we can achieve easily! Ultimately we can breakdown and fail to function all together.

The factors that facilitate a person to perform at an optimal level are variable and peculiar to the individual, however, certain elements are often common, such as:

Organisations, teams and individuals can take positive actions to facilitate optimum performance, such as: