Loss of separation between aircraft sometimes occurs as a result of action taken (or not taken) by the ATCO. In most cases this involves one or more of the following scenarios: 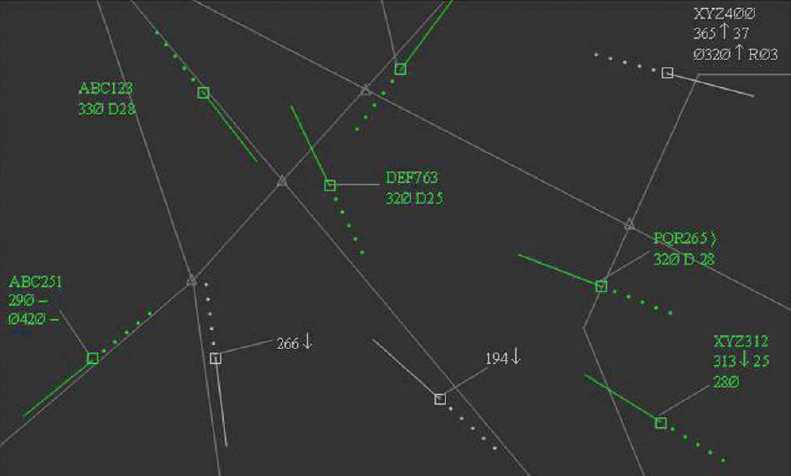 When issuing descent clearance to ABC123, the controller spots both PQR265 and XYZ312 but overlooks DEF763

The factors listed below would usually not be sufficient (on their own) to cause loss of separation but can exacerbate the situation:

At an organizational level, this includes:

In order to reduce the likelihood of making errors that lead to loss of separation, controllers should:

ACAS/TCAS is an onboard aircraft equipment designed to warn of potential collision with other aircraft. This barrier is meant to mitigate the consequences of a separation loss.

This section contains events where ATC error was considered as a contributory factor.

On 3 January 2019, prescribed vertical separation was lost between a Bombardier DHC8-400 and a Piaggio P180 on converging cruise tracks at FL 220 and only restored after a resulting TCAS RA was followed. The Investigation found both aircraft were being flown in accordance with their clearances and that the controller involved had not been aware of corresponding traffic and conflict alerting system activations. A specific traffic display fault which arose from failure to follow a routine software upgrade procedure correctly and the shift supervisor failing to recognise the need to act as controller when workload increased were assessed contributory.

On 23 February 2018, an Embraer 195LR and an Airbus A320 on SIDs departing Brussels lost separation after the 195 was given a radar heading to resolve a perceived third aircraft conflict which led to loss of separation between the two departing aircraft. STCA and coordinated TCAS RA activations followed but only one TCAS RA was followed and the estimated minimum separation was 400 feet vertically when 1.36 nm apart. The Investigation found that conflict followed an error by an OJTI-supervised trainee controller receiving extended revalidation training despite gaining his licence and having almost 10 years similar experience in Latvia.

On 12 April 2019, a Boeing 717-200 commenced a go around at Strasbourg because the runway ahead was occupied by a departing Bombardier CRJ700 which subsequently, despite co-ordinated TCAS RAs, then came to within 50 feet vertically when only 740 metres apart laterally as the CRJ, whose crew did not see the 717, passed right to left in front of it. The Investigation attributed the conflict primarily to a series of flawed judgements by the TWR controller involved whilst also noting one absent and one inappropriate ATC procedure which respectively may have provided a context for the resultant risk.

On 27 September 2019, an Airbus A320 and an Embraer 145 both inbound to Barcelona and being positioned for the same Transition for runway 25R lost separation and received and followed coordinated TCAS RAs after which the closest point of approach was 0.8nm laterally when 200 feet vertically apart. The Investigation found that the experienced controller involved had initially created the conflict whilst seeking to resolve another potential conflict between one of the aircraft and a third aircraft inbound for the same Transition and having identified it had then implemented a faulty recovery plan and executed it improperly.

On 12 May 2019, a Boeing 737-800 making its second procedural ILS approach to runway 25 at Reus came into conflict with an opposite direction light aircraft as the latter approached one of the designated VFR entry points having been instructed to remain well above the altitude which normally ensures separation of IFR and VFR traffic. The collision risk was resolved by TCAS RA promptly followed by the 737. The Investigation concluded that limiting the TWR radar display to the ATZ for controller training purposes had resulted in neither the trainee controller nor their supervisor being aware of the risk.

On 4 June 2016, a Boeing 737-800 instructed to climb from FL340 to FL380 by the controller of one sector in Bulgarian upper airspace came into sufficiently close proximity to an Airbus A320 under the control of a different sector controller to trigger co-ordinated TCAS RAs. Separation was eventually restored after the 737 followed its RA despite the A320, which had already deviated from its clearance on the basis of a prior TCAS TA without informing ATC, ignoring their RA. The Investigation found that the root cause of the conflict had been inadequate coordination between two vertically separated ATC sectors.

On 6 February 2013, ATC mismanagement of an Airbus A320 instructed to go around resulted in loss of separation in IMC against the Embraer 190 ahead which was obliged to initiate a go around when no landing clearance had been issued due to a Boeing 737-800 still on the runway after landing. Further ATC mismanagement then resulted in a second IMC loss of separation between the Embraer 190 and a Boeing 717 which had just take off from the parallel runway. Controller response to the STCA Alerts generated was found to be inadequate and ANSP procedures in need of improvement.

On 25 May 2010 an Air France Airbus A318 making an automatic landing off an ILS Cat 2 approach at Nantes experienced interference with the ILS LOC signal caused by a Boeing 737-800 which was departing from the same runway but early disconnection of the AP removed any risk of un-correctable directional control problems during the landing roll. Both aircraft were operating in accordance with their ATC clearances. Investigation attributed the conflict to the decision of TWR not to instruct the A318 to go around and because of diminished situational awareness.