Low visibility take-off (LVTO) means a take-off with a Runway Visual Range (RVR) lower than 400 m but not less than 75 m. (IR-OPS Annex I)

Note that ICAO requires LVP for all departures below 550m RVR, not just LVTO.

Low visibility procedures exist to support Low Visibility Operations at Aerodromes when either surface visibility is sufficiently low to prejudice safe ground movement without additional procedural controls or the prevailing cloud base is sufficiently low to preclude pilots obtaining the required visual reference to continue to landing at the equivalent of an ILS Cat 1 DH/DA. It should be noted that in the latter case, surface visibility may be relatively good but the TWR visual control room may be in cloud/fog. 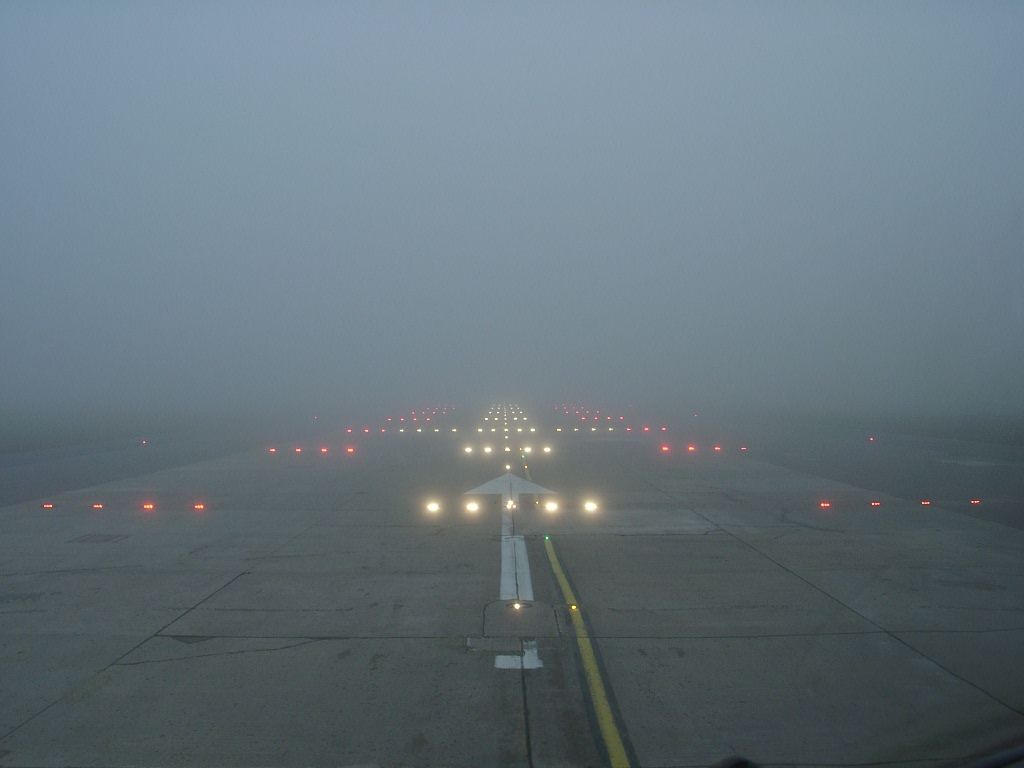 Low visibility on a Runway

On aerodromes where the ground marking and lighting is adequate, ground traffic at reasonable flow rates can often be sustained safely in reduced visibility. An aeroplane on the ground is at its most vulnerable during the landing and the take-off phases of flight when the options for avoiding action, if an obstruction is encountered, may be very limited. The aircraft is likely to be badly damaged or destroyed if it collides, at high speed, with any sizeable object.

Making the necessary transition to visual reference during the final stages of an approach to land in poor visibility is critical and certain requirements must be met to reduce the risk of a Runway Excursion. Low visibility take off also requires careful attention to correct runway alignment before the take-off is commenced; an ILS LLZ signal can be used for verification if available. If a rejected take-off (RTO) is carried out, pilots must maintain awareness of runway length remaining using whatever external visual cues are available; relevant runway lighting, signage or markings may be available.

As visibility deteriorates, the potential for runway incursions by aircraft, vehicles or personnel increases. The risk of inadvertent runway incursion by taxiing aircraft is greatest at aerodromes with complex layouts and multiple runway access points. This risk can only be managed adequately by the application of procedures that provide the pilot with clear, unambiguous guidance on routing and holding points or ground traffic patterns. Airport ground charts which show hotspots arising from frequent or opposite traffic, pilot reports of confusion or bad signage may improve pilots and controllers situational awareness.

The safe operation of airside vehicles depends upon drivers being adequately trained and thoroughly familiar with the aerodrome layout in all visibility conditions and on their compliance with procedures, signs, signals and ATC instructions. In low visibility conditions, extreme vigilance is required and special procedures, including restrictions on normal access, may be invoked. All of this is an essential product of the Airport Operator Safety Management System (SMS).

Controller ability to detect manoeuvring area conflicts may be reduced in poor visibility conditions, as the controllers may be unable to visually confirm whether their clearances are properly complied with.

Aerodromes that wish to continue operating in poor visibility or are available for instrument approaches in conditions of low cloud are required to develop and maintain LVPs.

Aerodromes that provide precision instrument approaches which provide guidance below ILS Cat 1 or equivalent DA/DH are required to have additional procedures in place that ensure the protection of signals transmitted by the ground based radio equipment that is used for the approach.

The point at which LVPs are implemented may vary from one aerodrome to another depending on local conditions and facilities available. It will usually be determined by a specific RVR or cloud base measurement. Typically an RVR below 550 metres or a cloud base below 200 ft aal will trigger LVPs.

Adequate consideration should be given to the time taken to implement fully all of the measures required to protect operations in low visibility conditions. Provision should also be made for alerting airlines, and other organisations with movement area access, in good time prior to the introduction of LVPs. This is particularly important where companies exercise control over their own apron areas and maintenance facilities adjacent to the manoeuvring area.

Regulatory authorities offer guidelines in respect of LVP implementation and suspension. A typical example is found in UK CAP 168: Licensing of Aerodromes, Appendix 2B, which contains information on the subject. ICAO European Region guidance material on LVPs is available in ICAO EUR Doc 013 "European Guidance Material on All Weather Operations at Aerodromes".

Taxi-out for departure and taxi-in after arrival in low visibility conditions is one of the most demanding phases of all-weather operations. The following good practices should be considered for inclusion in the SOPs:

Installing Runway Awareness and Advisory System (RAAS) on the aircraft improves situational awareness both on the ground and when airborne.