The Maloja Wind flows in the area of southeast Switzerland in the upper Engadine Valley, near Samedan Airport. The two valleys of Bregaglia and Engadine, with their topographic characteristics, and climatic conditions in summer months, allow for the Maloja Wind to develop. 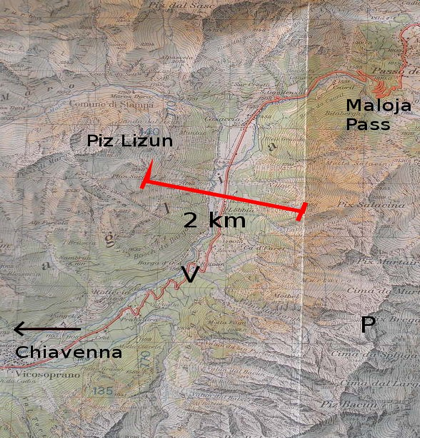 Fig. 1: Upper Bregaglia Valley, from Vicosoprano (lower left) to the Maloja Pass (upper right). The width of this portion of the Bregaglia Valley is about 2 km. The V and P designations, for valley and peak respectively, are used in the text. Map Source: Swisstopo.

The region of source for the Maloja Wind is the Bregaglia Valley, a rather east-west aligned valley of roughly 30 km in length situated west of the Maloja Pass. The Valley elevation change is roughly 1500 metres. As Fig. 1 shows, the upper part of this valley has steep mountain walls on either side of its roughly 2 km width, and at its terminus by the Maloja Pass, the valley is roughly less than 1 km wide. This creates in itself a relative "box canyon" of sorts, blocking moist air from the regions of the Po Valley to the south of the area from entering the Engadine Valley. The height difference between valley floor (designated “V” in Fig. 1) and mountain peak (designated “P” in Fig. 1) is about 2000 metres, and is quite narrow.

Photo 1 shows the view towards the Bregaglia Valley from the Maloja Pass. 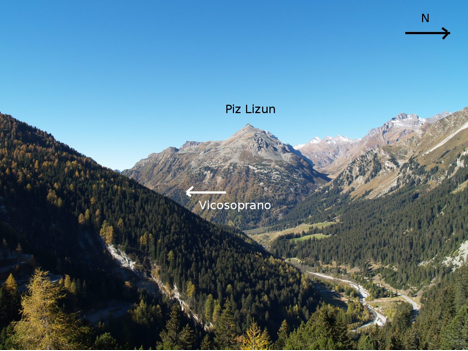 Photo 1: View westwards from the Maloja Pass towards the Bregaglia Valley. Piz Lizun and Vicosoprano designations used to provide a connect to Fig. 1. N designates north.

The Engadine Valley, or more precisely in this case the upper Engadine Valley, is a gently sloping wide Valley in comparison to its counterpart to the west, comparing Fig. 1 with Fig. 2. It begins at the Maloja Pass and for our intent in this paper ends near Zernez (roughly 30 km air distance north-east of St. Moritz), with valley elevation change of roughly 350 metres (compared to the relatively steeper 1500 metre change in the Bergaglia Valley). The Engadine Valley itself continues the length of the Inn River until the Austrian border. The height difference from valley floor (“V” designation in Fig. 2) to mountain peak (“P” designation in Fig. 2) is around 1400 metres, and its wide dimensions allow for much insolation. Photos 2 and 3 show the Engadine Valley 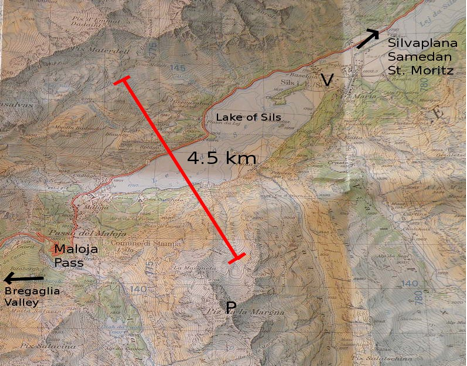 Fig. 2: The Upper Engadine Valley from the north-eastern shores of the Lake of Sils to the Maloja Pass. The width of this portion of the valley is about 4.5 km. The designations V and P are used in the text. Map Source: Swisstopo. 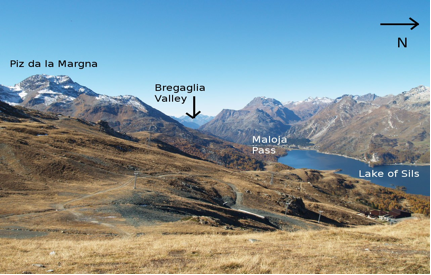 Photo 2: Upper Engadine Valley from the Maloja Pass to the middle part of the Lake of Sils. Geographical designations provided to connect with Fig. 2. 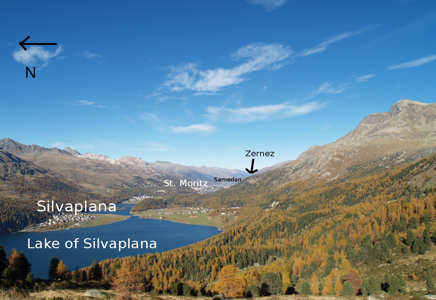 Photo 3: Upper Engadine Valley from the mid- part of the Lake of Silvaplana (roughly 3 km northeast of where Photo 2 ends by the Lake of Sils) to Zernez.

The lower Bergaglia Valley, which connects to the Lake of Como area and hence to the greater Po Valley region, receives insolation, and a moist anabatic valley wind to the Maloja Pass develops.

The wider Engadine Valley, as stated, receives significant insolation, and correspondingly on certain days a thermal low is created. This rising air from the Engadine Valley floor, combined with the height difference between Bergaglia and Engadine valleys, results in relative high pressure in the Bergaglia valley and low pressure in the Engadine, and corresponding pressure gradient (see Fig. 3) . The Bergaglia Valley anabatic wind is also accelerated by the narrowing valley towards the Maloja Pass (Venturi Effect). The air eventually rises over the Maloja Pass and into the Engadine Valley (see Fig. 4). The resulting wind does reach velocities of 20 to 30 knots, depending on atmospheric conditions at the time of development. When the predominant flow in the region is westerly or south westerly, the velocities become more pronounced. 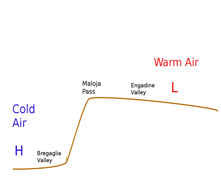 Fig. 3: Cross-sectional diagram of the Bergaglia and Engadine Valleys, and corresponding relative pressure differences. The "Warm" and "Cold" distinctions are relative to one another. 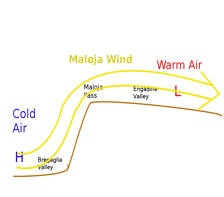 As the moist air from the Bergaglia Valley rises over the Maloja Pass, occasionally the air's dew point temperature may be reached, at which point cloud will form. The thermals from the valley walls may even shear the flow and create rotation, and the cloud takes on a snake-like form, and is called the “Maloja Schlange” or “Maloja Snake”. It generally forms around 500-700 metres above ground level (roughly 8000 feet AMSL) and is about 50 metres (150 feet) thick. This cloud generally dissipates over the Lakes of Sils and Silvaplana, but may even reach St. Moritz before dissipating, partly due to the Bruescha wind halting its propagation. This Maloja Snake is usually associated with deteriorating weather, but can also form when portions of the up slope fog produced from the anabatic flow in the Bergaglia Valley overrun the natural blocking effect of the Maloja Pass. The capping of these clouds may also indicate the inversion level, with possible shear associated with different wind directions and velocities.

Photo 4 shows an example of a Maloja Snake. 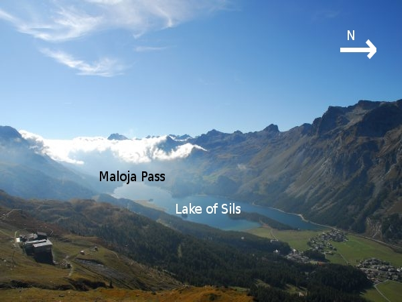 Photo 4: An example of a Malojaschlange or Maloja Snake. The cylindrical cloud formation can extend as far as St. Moritz. (Photo: Rene & Elisabeth Buehler)

Considerations and Other Information

The Maloja Wind is generally limited with regards to altitude. The Valley walls are heated to such an extent that an inversion may form, capping the colder wind from reaching higher altitudes. Therefore at higher altitudes calmer winds may be experienced, along with an inversion. This may have consequences for aircraft using Samedan airport, as their performance decreases if air is warmer at altitude.

The Maloja Wind generally flows in the main Engadine Valley, and is not very noticeable in side valleys.

With a general north-easterly flow the Maloja Wind's effects and strength are reduced, to the point of being non-existent, although there may still be a noticeable SW-wind component near the Maloja Pass due to the effects resulting in the Maloja Wind.

In the evenings, as insolation is reduced, the Maloja Wind lessens in intensity. At night, the katabatic wind flow patterns are generally the norm.