Memory can be defined as the ability to store, retain, and subsequently recall information. It may involve conscious and non-conscious aspects.

The task of air traffic control involves observing and reacting to events that take place in a part of airspace or a manoeuvring area on the ground, for which the ATCO is responsible, based on interpretation of information displayed at the working position or relayed to them by radio or data communication.

Memory is also extremely important for the pilot, who has to fly the aircraft, manage its systems and interact with the crew while at the same time receiving and acting upon messages received from the ATCO. The way in which this information is passed to the pilot is therefore of great importance.

First of all, any description of human memory has limitations and most are based on hypothetical construct. Nowadays, science provides a diversity of human memory models. Moreover, different sciences approach the phenomena in their specific way - memory has been a subject of discussion for natural, cognitive, and social sciences. Some of the models are outlined below.

There are several ways to classify memory, based on duration, nature, and retrieval of information. Before information can be processed by the memory, it is received into the Sensory Memory where it remains for a brief period of time before being discarded or stored in the Short-Term Memory. After use, information contained in the short-term memory is lost unless it is stored in the Long-Term Memory. This simplified model is illustrated in Figure 1.

In general, the duration of Sensory Memory is very short - less than 0.5 seconds. Visual Sensory Memory, for example, lasts about 250 milliseconds. Although short in duration, the size is very big and the information retained is quite accurate.

What part of the information goes to the next stage is determined by the selection process. The selection can be:

The capacity of short-term memory is fairly limited: the maximum number of unrelated items that can be maintained when full attention is devoted to rehearsal is about seven. The duration is also very limited - on average 15-30 seconds. This has important implications for the amount of information that should be included in any single RTF message. Once this limit is exceeded, one or more items are likely to be lost or transposed.

The number of items retained in short-term memory can be expanded by the clustering or “chunking” of related material. This can occur when two or more items have been previously associated, for example, a familiar telephone code such as 0032 may be clustered and require only one space rather than four. Chunking unrelated items into groups of three or four, e.g. 729 3965 will also assist the maintenance of items. The size of “chunk” will clearly be determined by the individual’s familiarity with the information. This mechanism may permit RTF frequencies and even weather reports or sections of a flight clearance to be remembered as a number of chunks rather than individual items.

The way in which the information contained in a message is chunked depends on the person receiving the message: a pilot and ATCO are likely to chunk a message in rather different ways. This is due to the familiarity of each person and their professional experiences. It is also associated with the position of the person, either as the sender or the receiver. Figure 2 gives examples of how this might occur: 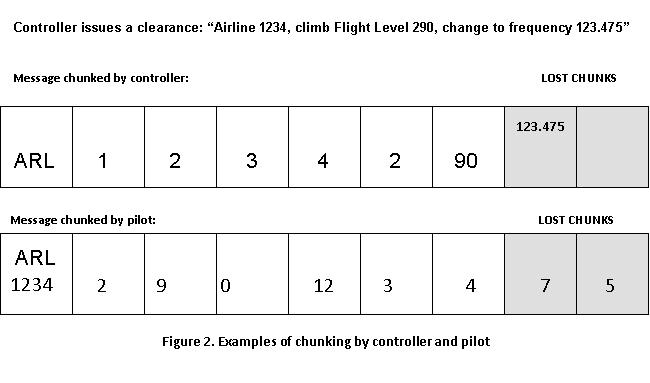 This illustrates that what may be familiar chunking by the controller is not necessarily familiar chunking by the pilot. The frequency for the next sector is used all the time by the controller and is one chunk for him, but this is not the same for the pilot. Vice versa, the call sign is much more familiar to the pilot than to the controller. A recommendation often made, associated with air-ground communications, is to limit the number of elements in a message to two to reduce the chance of an element being missed or misheard.

The elements of an RTF frequency are treated by a pilot as individual digits; and therefore, a frequency change should not be combined with another instruction in order to enable the pilot to remember.

The information in short-term memory is lost by two processes:

Short term memory is found to be stronger with visual compared to audio information. Experiments show that it is more difficult to recall an acoustically similar collection of words. This acoustic similarity is a contributory factor in call sign confusion. The strategies for helping manage the limitations of short-term memory include:

The size and the duration of information in long term memory are unlimited. The issue is retrieving the information which is needed and exactly when it is needed.

From an information processing perspective there are three main stages in the formation and retrieval of memory:

The information contained in long-term memory can be classified into two types:

The Working Memory Model is linked with task and objectives to be performed by the individuals and has been proposed to respond to some of the criticism of short-term memory, but is not a replacement of it as Working Memory is defined not in terms of the amount of time information can be held but, rather in terms of the goal of the task being performed.

The Working Memory Model often used is the one proposed by the cognitive psychologist Baddeley.

This model consists of:

This model proposes that the method and depth of processing are the most important factors in determining how the information is stored. Depth of processing falls on a shallow to deep continuum. Basically the more meaning associated with the processing the deeper the processing. Shallow processing on the other hand is more based on letters, sounds, shapes and less on meanings.

There is research evidence that controller’s memory for flight data is a function of the level of control exercised. It has been found that flight information for aircraft in possible conflict is significantly better than memory for flight information for those aircraft of less concern at that moment in time and which require little controller intervention. Another example is increasing the depth of processing by touching the related strips and writing on them or on paper - this is reinforcing the memory not only by writing but also by recognising their own writing. It is possible that when controllers read information from a strip in their own handwriting they do not only interpret and comprehend the content, they also remember the previous act of writing it, and perhaps more importantly, the reasons why a particular course of action had been taken.

Example of increasing the depth of the knowledge in the training is explaining the reason and history of the procedures and working practices.

Memory in The Real World

Memory in the Real World is less of a model and more of a research approach. It suggests that the research should have “ecological validity” - it should apply to naturally occurring behaviour in the natural context of the “real world” - as opposed to the laboratory. Most studies on memory and memory processes are done in laboratory settings where individuals are supposed to memorise more or less meaningless information. In real life several other important variables, such as emotions, meaning and context, affect this process.