In Russia and parts of Central Asia including Mongolia, Uzbekistan, Kazakhstan and other members of the Commonwealth of Independent States (CIS), level flight above the transition altitude is accomplished at the assigned flight level with reference to, and clearances given in, feet (eg. FL330) However, altitudes below the transition level are assigned in metres. Aircraft can fly at the assigned altitude using an altimeter that indicates in metres or, if fitted with altimeters that read in feet, by conversion of the assigned altitude/level.

Conversion tables are published on the outer leaf of en-route charts and usually also published in the company ops manuals of operators who regularly operate in this region. 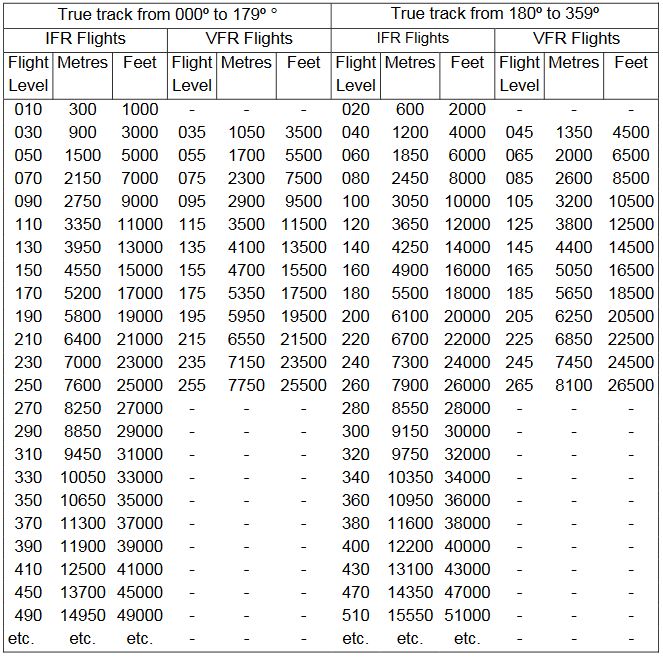 Flight Level to metres conversion table based on the semi-circular system relative to the true meridian. Source ICAO Annex 2

Note also that metric altitudes are used elsewhere in Europe by some airspace users, mainly by gliders. See appropriate AIPs for further information.

The terminology “altitude (or height) one thousand five hundred metres” is used by ATC when assigning flight altitude values in metres based upon:

Transition altitudes/levels vary from airport to airport and level flight below transition level is generally confined to the terminal area.

For approach procedures, altitudes are assigned in metres. Aircraft that are not equipped with metric altimeters will fly the procedures in feet. Jeppesen and other approach charts sources provide a conversion chart on the approach plate which cross references metres and feet and QFE/QNH altitudes for all of the charted altitudes of the procedure depicted.

Altimeter Pressure Settings (QFE) altimeter settings are the normal standard that ATC provides for approach procedures within the CTR. Most (but not all) airports will accommodate QNH approaches on request.

It is essential that the pilots are aware of which altimeter reference they have been given and that they fly the depicted altitudes that correspond to that reference. This can be particularly confusing for pilots of an aircraft with only imperial (feet) referenced altimeters as the cleared altitudes are being provided in metres by ATC. As a safety crosscheck, it is very rare for the aircraft to be cleared below the altitude depicted on the chart for the next segment of the approach, and the aircraft will only be cleared below the depicted approach procedure platform altitude by means of an approach clearance. Therefore, if the cleared altitude, when converted to feet, is lower than that depicted on the plate, it is likely that the controller and the pilot are not using the same altimeter reference and clarification must be obtained.