Editor's note: The original material for this article was contributed by DNVGL.

One of the most hazardous consequences of a loss of separation between aircraft, including as a result of a level bust, is a  mid-air collision

A Mid-Air Collision (MAC) is an accident where two aircraft come into contact with each other while both are in flight.

Possible consequences of a MAC are temporary or permanent Loss of Control as a result of damage, avoidance manoeuvre, or mis-handling, potentially resulting in collision with terrain, or an emergency landing as a result of damage to the aircraft and/or injuries to crew and passengers.

It is commonly assumed that any MAC would cause loss of both aircraft and all people on board. In fact, accident and serious incident reports show that there have been a few non-fatal MAC accidents. However, in most cases, total loss is the result.

A crash following MAC may also cause fatalities among people on the ground. 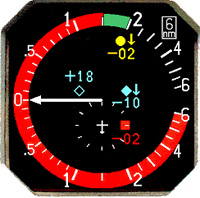 Example of ACAS II traffic display, indicating a "Climb" RA with a vertical speed of 1500 ft/min.

The main barriers against MAC are:

Providence (i.e. the chance separation of the two aircraft trajectories in time or space) can also be considered a barrier against MAC. It explains why a loss of separation does not necessarily lead to a collision, even if all the managed collision avoidance barriers are unsuccessful.

Because of the multiple barriers that are in place, most collisions do not have a single cause, but multiple causes, typically one for each unsuccessful barrier. “Unsuccessful” is a general term covering all types of failure causes, including technical reasons, human error (e.g. lack of response or misjudgement), impracticability (e.g. not enough time) or lack of coverage (e.g. equipment not fitted). Barriers may also be by-passed (e.g. if a conflict is created at the tactical stage, strategic conflict management is then inapplicable).

Further details on the causes of unsuccessful tactical conflict management are given in the article on loss of separation.

Examples of the causes of unsuccessful collision avoidance are:

The causes of barriers being unsuccessful are not necessarily independent. In fact, the most important causes include ones that make several barriers unsuccessful (known as common-cause failures). These are considered further under contributory factors below.

In addition to the specific causes of barrier failure, there are many other factors that can contribute to MAC or influence its likelihood.

Key influences (common-causes) that may affect several barriers at once include:

Reductions in collision risk can be achieved by reducing the most important reasons why the individual barriers are unsuccessful, especially common-causes; improving beneficial influences that may make existing barriers more successful; and introducing new barriers, if this can be done without degrading the ones that are already there. As well as reducing collision risk, it is also desirable to maintain awareness of reasons why collision risks have been made as low as they are, so as to prevent deterioration in the future.

Key areas with potential for improvement include:

On 12 November 1996, an Ilyushin IL76TD and an opposite direction Boeing 747-100 collided head on at the same level in controlled airspace resulting in the destruction of both aircraft and the loss of 349 lives. The Investigation concluded that the IL76 had descended one thousand feet below its cleared level after its crew had interpreted ATC advice of opposite direction traffic one thousand feet below as the reason to remain at FL150 as re-clearance to descend to this lower level. Fifteen Safety Recommendations relating to English language proficiency, crew resource management, collision avoidance systems and ATC procedures were made.

On 1 December 2014, a night mid-air collision occurred in uncontrolled airspace between a Lockheed C130H Hercules and an Alenia C27J Spartan conducting VFR training flights and on almost reciprocal tracks at the same indicated altitude after neither crew had detected the proximity risk. Substantial damage was caused but both aircraft were successfully recovered and there were no injuries. The Investigation attributed the collision to a lack of visual scan by both crews, over reliance on TCAS and complacency despite the inherent risk associated with night, low-level, VFR operations using the Night Vision Goggles worn by both crews.

On 7 July 2015, a mid-air collision occurred between an F16 and a Cessna 150 in VMC at 1,600 feet QNH in Class E airspace north of Charleston SC after neither pilot detected the conflict until it was too late to take avoiding action. Both aircraft subsequently crashed and the F16 pilot ejected. The parallel civil and military investigations conducted noted the limitations of see-and-avoid and attributed the accident to the failure of the radar controller working the F16 to provide appropriate timely resolution of the impending conflict.

On 5 September 2015, a Boeing 737-800 cruising as cleared at FL350 on an ATS route in daylight collided with an opposite direction HS 125-700 which had been assigned and acknowledged altitude of FL340. The 737 continued to destination with winglet damage apparently causing no control impediment but radio contact with the HS 125 was lost and it was subsequently radar-tracked maintaining FL350 and continuing westwards past its destination Dakar for almost an hour before making an uncontrolled descent into the sea. The Investigation found that the HS125 had a recent history of un-rectified altimetry problems which prevented TCAS activation.

On 28 August 2006, a Hawker 800 collided with a glider at 16,000 feet in Class 'E' airspace. The glider became uncontrollable and its pilot evacuated by parachute. The Hawker was structurally damaged and one engine stopped but it was recovered to a nearby airport. The Investigation noted that the collision had occurred in an area well known for glider activity in which transport aircraft frequently avoided glider collisions using ATC traffic information or by following TCAS RAs. The glider was being flown by a visitor to the area with its transponder intentionally switched off to conserve battery power.

On 23 June 2014, a civil-operated Learjet 35 taking part in a German Air Force interception training exercise collided with the intercepting fighter aircraft as it began a follow-me manoeuvre. It became uncontrollable as a result of the damage sustained in the collision and crashed into terrain, killing both pilots. The Investigation found that whilst preparation for the exercise by all involved had been in compliance with requirements, these requirements had been inadequate, especially in respect of co-ordination between all the pilots involved, with both the civil and military safety regulatory authorities failing to detect and act on this situation.

On August 8, 2009 a privately operated PA32 and a Eurocopter AS350BA helicopter being operated by Liberty Helicopters on a public transport sightseeing flight collided in VMC over the Hudson River near Hoboken, New Jersey whilst both operating under VFR. The three occupants of the PA32, which was en route from Wings Field PA to Ocean City NJ, and the six occupants of the helicopter, which had just left the West 30th Street Heliport, were killed and both aircraft received substantially damaged.

On 14 June 2009, a Grob 115E Tutor being operated by the UK Royal Air Force (RAF) and based at RAF Benson was conducting aerobatics in uncontrolled airspace near Drayton, Oxfordshire in day VMC when it collided with a Standard Cirrus Glider on a cross country detail from Lasham. The glider was sufficiently damaged that it could no longer be controlled and the glider pilot parachuted to safety. The Tutor entered a spin or spiral manoeuvre which it exited in a steep dive from which it did not recover prior to a ground impact which killed both occupants.

On 11 February 2009, the plots of two civil-registered Grob 115E Tutors being operated for the UK Royal Air Force (RAF) and both operating from RAF St Athan near Cardiff were conducting Air Experience Flights (AEF) for air cadet passengers whilst in the same uncontrolled airspace in day VMC and aware of the general presence of each other when they collided. The aircraft were destroyed and all occupants killed

On 29 September 2006, a Boeing 737-800 level at FL370 collided with an opposite direction Embraer Legacy at the same level. Control of the 737 was lost and it crashed, killing all 154 occupants. The Legacy's crew kept control and successfully diverted to the nearest suitable airport. The Investigation found that ATC had not instructed the Legacy to descend to FL360 when the flight plan indicated this and soon afterwards, its crew had inadvertently switched off their transponder. After the consequent disappearance of altitude from all radar displays, ATC assumed but did not confirm the aircraft had descended.

On 5 February 2006, two Shorts SD-360-300 aircraft collided in mid air while in formation near Watertown, WI, USA; both aircraft suffered damage. One aircraft experienced loss of control and impacted terrain while the other made an emergency landing, overunning the runway, at a nearby airport.

On 1st July 2002, a Russian-operated Tu154 on a passenger flight collided at night with a cargo Boeing 757-200 over Überlingen, Germany with the consequent loss of control of both aircraft and the death of all occupants. The collision occurred after an ATC control lapse had led to a conflict which generated coordinated TCAS RAs which the B757 followed but the TU-154, in the presence of a conflicting ATC instruction, did not.

On 21 January 1999, a UK Royal Air Force Tornado GR1 and a private Cessna 152 collided in mid air, at low level in day VMC with the resultant loss of both aircraft and the death of all occupants.

In the "Loss of Separation" Category: