A humid subtropical climate is a zone of climate characterised by hot and humid summers, and cool to mild winters. These climates normally lie on the southeast side of all continents (except Antarctica), generally between latitudes 25° and 40° and are located poleward from adjacent tropical climates. It is also known as warm temperate climate in some climate classifications.

While many subtropical climates tend to be located at or near coastal locations, in some cases, they extend inland, most notably in China and the United States where they exhibit more pronounced seasonal variations and sharper contrasts between summer and winter, as part of a gradient between the hotter tropical climates of the southern coasts and the colder continental climates to the north and further inland. As such, the climate can be said to exhibit somewhat different features depending on whether it is found inland, or in a maritime position due to the temperature moderating impacts of nearby bodies of water.

In a humid subtropical climate, summers are typically long, hot and humid. Monthly mean summer temperatures are normally between 24 and 27°C. A deep current of tropical air dominates the humid subtropics at the time of high sun, and daily intense (but brief) convective thundershowers are common. Summer high temperatures are typically in the high 20s to mid-30s °C, while overnight lows in the summer are typically in the lower 20s °C. Monthly mean temperatures in winter are often mild, typically averaging 7.5 to 16°C . Daytime highs in winter normally are in the 10 to 16°C range, while overnight lows are from 2 to 7°C , though the poleward boundaries of this climate feature colder temperatures, possibly below freezing.

Rainfall shows a summer peak, where monsoons are well developed, as in Southeast Asia and South Asia, but consistently lack any predictably dry summer months unlike mediterranean climates. Most summer rainfall occurs during thunderstorms that build up due to the intense surface heating and strong subtropical sun angle. Weak tropical systems that move in from adjacent warm tropical oceans, as well as infrequent tropical cyclones, often contribute to summer seasonal rainfall peaks. Humid subtropical dry winter climates such as southeast Asia (influenced by the monsoon) and Florida in the United States have very dry winters, with frequent brush fires and water shortages. This is due to infrequent occurrences of midlatitude storm systems and a lack of moisture influx. 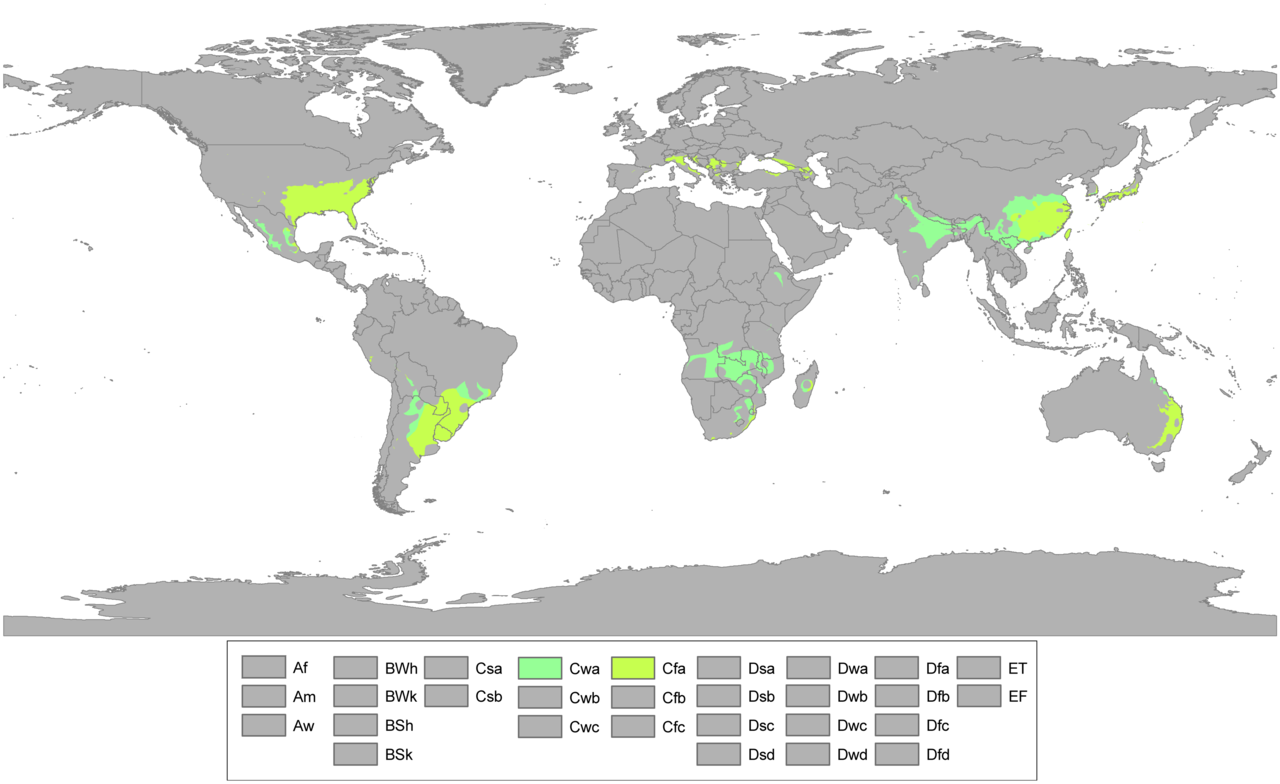