The term originates from January 1597 when a member of Willem Barentsz's polar expedition, which had spent the winter on Novaya Zemlya, an archipelago in the Arctic Ocean, claimed to have seen the Sun appear above the horizon two full weeks prior to its calculated return.

A similar effect was seen in the Antarctic by Ernest Shackleton during his 1914-17 expedition. He saw the sun seven days after it had set below the horizon and, two months later, five days before it reappeared above the horizon.

Apart from the image of the Sun, the Novaya Zemlya effect can also elevate the image of other objects above the horizon, such as coastlines which are normally invisible due to their distance.

A mirage, a deceptive appearance of a distant object, is caused by the bending of normally straight light waves (called refraction) in layers of air of different densities and temperatures.

Due to normal atmospheric refraction, sunrise occurs shortly before the Sun crosses above the horizon. Light from the Sun is bent, or refracted, as it enters earth's atmosphere. This effect causes the apparent sunrise to be earlier than the actual sunrise. Similarly, apparent sunset occurs slightly later than actual sunset.

Under Polar conditions, severe air temperature gradients can exist above the ice surface. When there is a strong temperature inversion layer – colder air below a relatively warmer layer – we have the conditions for a Novaya Zemlya mirage.

Rays from the sun can enter the cold layer. Once there, they can be channelled (ducted) around the curvature of the Earth for distances up to a few hundred kilometres. A ray passing from cold air into warmer air is always refracted back toward the colder medium. If the refraction is strong enough the ray mirrors up and down inside the duct. An observer at the other end sees a slot shaped image of the below horizon sun transmitted hundreds of miles. Several oscillating paths are possible giving the characteristic stacked lines with blackness between. In the fully developed Novaya Zemlya effect, each slot shaped image is a squashed full width whole sun thus giving, in total, a rectangular shape.

Polar conditions or the lower warmer air layer are not always necessary and the effect is sometimes seen off the Californian coast where strong inversions result from the combination of cold offshore sea currents and warm air from the land. A weaker form of the Novaya Zemlya effect is the more familiar mock-mirage of three or more segmented suns. 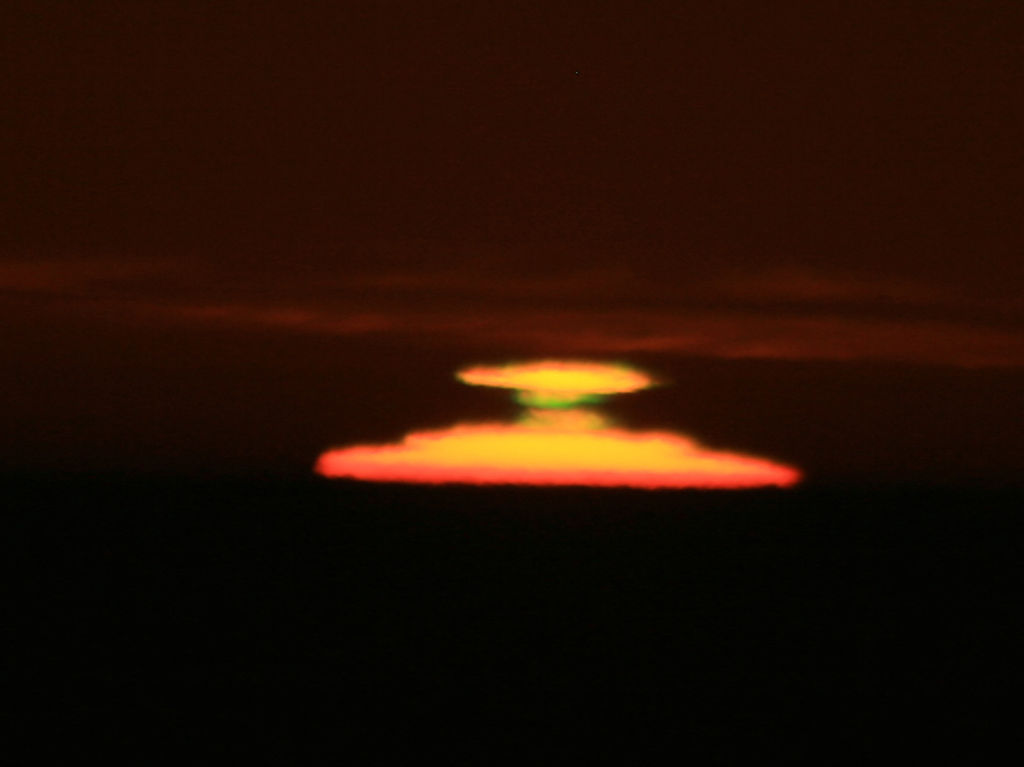 "The mirage was at first like a flattened-out glowing red streak of fire on the horizon; later there were two streaks, one above the other, with a dark space between; and from the main-top I could see four, or even five such horizontal lines directly over one another, and all of equal length; as if one could only imagine a square dull-red sun with horizontal dark streaks across it. An astronomical observation we took in the afternoon showed that the sun must in reality have been 2° 22' below the horizon at noon; we cannot expect to see its disk above the ice before Tuesday at the earliest; it depends on the refraction, which is very strong in this cold air." - Excerpt from 'Farthest North', F Nansen 1897.