The European Commission’s (EC) drive to create a Single European Sky (SES) – where harmonised rules and procedures are utilised across all States – has generated a range of new regulatory rules for both States and ANSPs, many of which necessitate changes in working methods. ANSPs – whether they offer meteorological, aeronautical information, CNS or air traffic services – throughout the region must now be certified by a National Supervisory Authority (NSA) before they can provide a service. The effectiveness of the NSA has therefore become crucial to the achievement of a Single European Sky. To support States and their NSAs, the EUROCONTROL Safety Regulation Commission (SRC) and the Institute of Air Navigation Services (IANS) have developed a programme of training designed to assist in preparing NSA personnel to undertake their various tasks. The intial SRC Safety Regulation Training (SeRT) Programme was established as a means to help States in the implementation of the EUROCONTROL Safety Regulatory Requirements (ESARRs) provisions. The introduction of the Single Sky legislation provided that the regulatory training programme shall focus particular attention on the role and responsibilities of the newly established NSAs as described by the SES legislation. The second aim of the training programme was to take into consideration the needs of the EUROCONTROL Member States who are not members of the EU regarding the high training demand and the need for harmonisation with the EU Member States. Consequently, the ‘NSA Training Initiative’ (NTI) Programme was launched. Overall, this training programme covers topics including a thorough understanding of the SES legislative framework, the functions of a NSA, audit techniques and practices, safety oversight, personnel competence and occurrence reporting and investigation.

About the NSA Training Initiative Programme

The NSA Training Initiative is a dedicated training programme designed to support NSAs in enabling them to meet their obligations under SES legislation (SES I and SES II) and to ‘ensure specific training for those involved in safety oversight activities within their structure’ as per Commission Implementing Regulation (EU) No 1034/2011, Article 12(3) (b).

The NTI Programme has been specifically developed for NSA staff and is ideally suited to those having recently joined the organisation and who wish to gain a comprehensive understanding of the role and functions of a NSA. It will also be of value to those with some experience within a NSA wishing to develop their knowledge and skills of specific NSA functions (e.g. in preparation for taking on greater responsibilities).

Although, the NTI is focused on the supervisory and oversight roles of a NSA, the principles covered, and much of the content, are equally applicable to the work of other regulatory agencies. The courses may also be of interest to those wishing to gain an understanding of regulatory functions and techniques, for example, staff from ANSPs preparing to take on additional responsibilities which include working with the NSA or the regulator.

The NTI Programme comprises mandatory and optional modules to support wider EUROCONTROL objectives and changes to the European regulatory framework resulting from SES legislation and the extension of EASA’s competences to ATM. Therefore, the mandatory elements are designed to provide an appreciation of the legal background that supports an NSA and the core functions performed by an NSA, and the optional elements cover various specialist tasks.

The programme consists of the following elements:

The NTI Programme is a two and half year programme having a modular structure allowing regulatory staff to follow a full training portfolio.

It consists of a number of modular classroom-based training courses, some of which are mandatory and others which are optional. Although the courses may be followed in any order, it is strongly recommended to undertake the mandatory elements before attempting any of the optional specialist courses. Participants who successfully complete and pass an examination in each mandatory element and three of the optional courses will be awarded a Certificate of Achievement 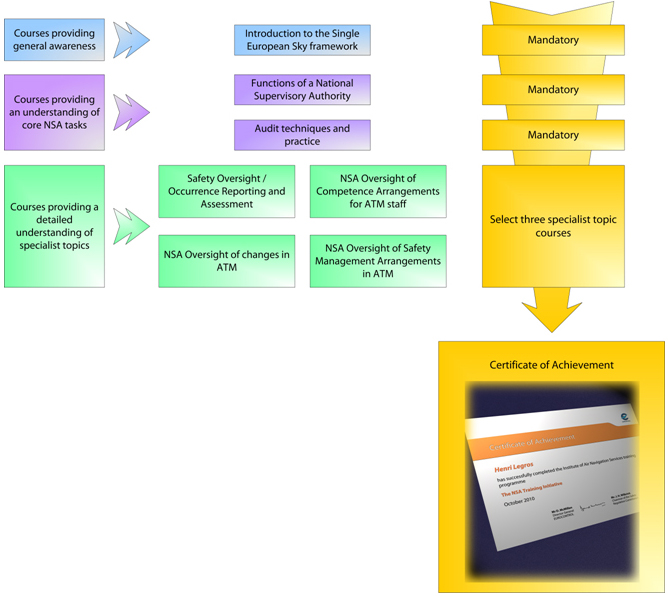 Evolution of the NTI Programme

The NTI programme has been developed as modular structure to enable EUROCONTROL to quickly respond to changes in the regulatory framework and the demands of Member States and their NSAs by offering new modules to complement the existing training programme. As such, new modules are planned to be included in the training programme to cover performance scheme, functional airspace blocks as well as new amendments to the SES package.

From September 2009 until December 2010 more than 400 people had been trained in different modules of the NTI Programme. It is foreseen that more than 300 people from EUROCONTROL Member States will enrol in the NSA Training Initiative in 2011.