When large masses of warm air and cold air meet, they do not mix because of density differences. Instead, they form a front, usually hundreds of miles long. An Occluded Front forms when a warm air mass gets caught between two cold air masses. The warm air mass rises as the cool air masses push and meet in the middle. The temperature drops as the warm air mass is occluded, or “cut off,” from the ground and pushed upward. Such fronts can bring strong winds and heavy precipitation. 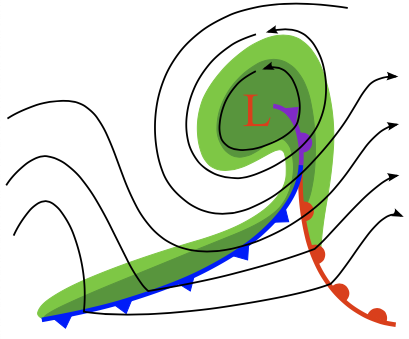 There are two types of occlusion, warm and cold: 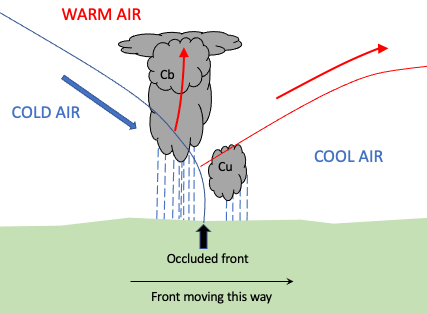 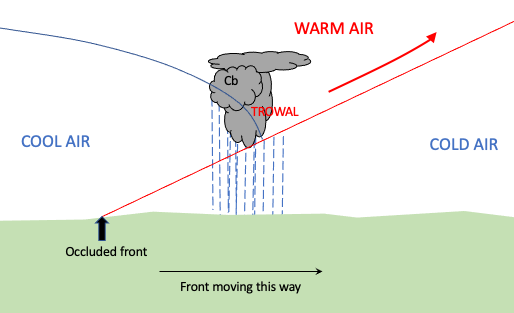 The occlusion process discussed above follows the original Norwegian Cyclone Model with the formation of an occluded front simply as a result of surface frontal movements. Recent findings indicate that the occlusion process is more complex than this, and that it is tied into the development of a low pressure area or cyclone and developments above the surface.

Weather associated with an Occluded Front

A wide variety of weather can be found along an occluded front, with thunderstorms possible, but usually their passage is associated with a drying of the air mass. Rarely, cold core funnel clouds are possible if shear is significant along the cold front. Small isolated occluded fronts often remain for a time after a low pressure system has decayed and these create cloudy conditions with patchy rain or showers.

However, the clouds and precipitation are not really where the projection on the Earth's surface of the occluded front is, particularly with a warm occlusion (as shown in the diagrams above) but with the trough of warm air aloft (TROWAL) position.