In September 2013, the UK CAA decided to initiate a Review “to examine thoroughly the risks and hazards of operating in the North Sea and consider how these can be managed more effectively”. This Review was conducted “in conjunction with the Norwegian Civil Aviation Authority (NCAA) and the European Aviation Safety Agency (European Aviation Safety Agency (EASA)) so that a comparison could be made of any safety or operational differences”. 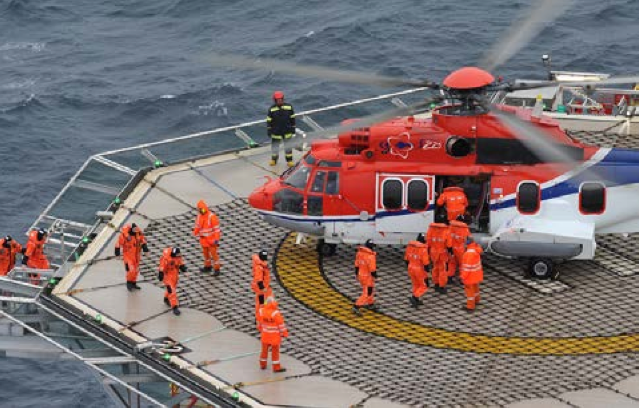 The decision to undertake the review followed serious concerns in the wake of the latest fatal helicopter accident in the UK Offshore Sector the ditching of a Super Puma off Shetland in August 2013 which resulted in 4 fatalities and 3 serious injuries. The Terms of Reference adopted “required that it should study current operations, previous incidents and accidents and offshore helicopter flying in other countries in order to make recommendations aimed at improving the safety of offshore flying”.

Whilst primarily directed at securing increased safety for routine offshore helicopter operations, this Review also has indirect relevance for offshore Search and Rescue (SAR) using helicopters. It is also likely to be of interest to other offshore oil and gas locations around the world, especially those in relatively hostile operating and survival environments.

Whilst the Report is focused on the use of helicopters in support of oil and gas operations in the UK sector of the North Sea, it also looks in detail at practices in the rest of the North Sea, particularly the Norwegian sector. It is noted that 95% of European transport helicopters with more than 18 passenger seats (the SIKORSKY S-92, the EC225 and the AS332) are operated from the UK and Norway. 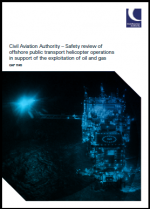 The Review estimated that in 2013, the use of helicopters by the oil and gas industry in the UK and Norwegian Continental Shelf areas involved the respective use of 228/100 fixed helidecks and 50-100/20-40 mobile helidecks. In 2012, the UK area recorded over a million passenger journeys using a fleet of approximately 95 helicopters and the Norwegian area about 850,000 passenger journeys using a fleet if about 55 helicopters.

The Review was based on “statistical analysis of reportable occurrences” and on an examination of relevant historical reports, studies and research which focused on the protection of passengers and crew and the operational and airworthiness issues raised by offshore operations in the UK North Sea.

It was noted that the work on operations and airworthiness was founded on the identification of causal factors during this analysis, on previous UK sector reviews and safety studies and on a series of Studies carried out for offshore operations on the Norwegian Continental Shelf by the Norwegian research organisation SINTEF, the most recently published of the latter being Helicopter Safety Study 3 in March 2010.

The recent issue of the EASA NPA on offshore helicopter operations in connection with current Rule Making Tasks RMT 0409/0410 which seek to address safety risks identified in such operations is acknowledged. This NPA envisages the introduction of a more stringent approval requirement in Annex V (Part-SPA) to Commission Regulation (EU) No 965/2012. The significance of two other current Rule Making Tasks, RMT.0120 (Ditching and Occupant Survivability) and RMT.0302/0515 (Helicopter Height/Velocity limitation), is also noted.

An internal UK CAA review of all UK offshore public transport helicopter reportable accidents during the period 1976 to 2012 had been initiated in response to an apparent decrease in the safety performance of offshore helicopter operations following a ditching in May 2012 (EC25, en-route, 20nm east of Aberdeen UK, 2012) and this was updated and used as a key part of the Review. During the more recent part of this period, 1992-2013, it was found that the combined data for both fatal and non fatal accidents showed that 28% could be attributed to both ‘technical’ and to ‘external’ causes with the remaining 44% attributed to ‘operational’ causes. The majority of the later were attributed to “pilot performance issues”, the overwhelming majority of ‘technical’ cause accidents to rotor and transmission failures and the overwhelming majority of ‘external’ cause accidents to lightning strikes (although lightning strikes were not the cause of any fatal accidents). A reduction in the technical cause rate accidents in the early 1990s was observed to have been “coincident and consistent with the introduction of Health and Usage Monitoring System (HUMS)”.

The review compared the prevailing “mortality risk” for offshore helicopter occupants with that for passengers on commercial air transport flights in jet aircraft and noted that it was 10 times higher at 0.5 per million flights. Whilst noting the relatively more complex nature of twin turbine-powered helicopters and the relatively more hazardous offshore low level operating environment, the Report states that whilst any expectation that the level of safety of offshore helicopter operations might match that of jet transport operations is “unrealistic”…it is the view of the CAA that significant scope for improvement does exist and it is the aim of the actions and recommendations in this offshore review is to realise those improvements”.

Apart from seeking to understand accident and incident causation and thereby reduce accident prevalence, the Review recognised the importance of also examining ways of “mitigating the consequences of accidents in terms of protecting passengers and crew against injury or death”.

The Review notes that the key issues in this area are not new and remain:

It is further noted although there were 12 ditchings (as well as 17 “water impacts”) in the UK North Sea sector between 1976 and 2012, none of these resulted in fatalities. However, the nine water impacts in this period that were considered survivable led to 38 fatalities - 31 of which failed to escape from the helicopter and all but one of those who did escape then “perished in adverse sea conditions sea state 7 before rescue could be made. The 2013 water impact accident already mentioned also led to fatalities and serious injuries.

The Review addresses “survivable water impacts” and notes that since the prevention of capsize is not practical, the only way forward is to mitigate the consequences for occupants. The way to achieve this is seen as:

Whilst noting that the remit of EASA RMT.0120 concerns this, the Review states that “in view of the uncertain outcome of the EASA RMT and the timescales of any safety improvements that it does deliver, the CAA is of the view that consideration of further measures in advance of the EASA final decision is warranted to address the weaknesses identified” (the four key issues quoted above). It is also considered that such action would be complimentary to the RMT by ensuring that “life-saving improvements to the aircraft and/or survival equipment would be introduced sooner” which would help to reinforce the RMT proposals.

To this effect, the Review states that UK CAA therefore intends to, from various specified dates:

It also recommends that EASA RMT.0120 should result in mandatory safety and survival training for offshore passengers and that offshore operators should begin voluntarily addressing a series of proposals contained in the current draft NPA in respect of the likely output from the same RMT.

A comprehensive review of all airworthiness issues is also included and places great importance on the continued room for improvement in the capability and application of the Helicopter Health and Usage Monitoring System (HUMS) which has already been of great value in mitigating the severity of the consequences of airworthiness failures. Airworthiness attention has particularly focused on issues affecting the principal types likely to remain in the offshore fleet long term, including those which will be used to complete the takeover of UK SAR service from the RAF and Royal Navy.

Throughout the Review there are 32 ‘Actions’ which the CAA has committed to and 29 Recommendations to others. The content of some has been alluded to in this summary but the range of subjects addressed is wide. The Recommendations consist of 13 made to EASA, 12 made to the Helicopter Industry (AOC Holders, MROs, ATOs and manufacturers), 3 made to the Oil and Gas industry and 1 collectively to all three of these.