A parhelion (plural parhelia), also commonly known as sun dog or mock sun, is an atmospheric optical phenomenon that consists of a bright spot to one or both sides of the Sun. Two parhelia often flank the Sun within a 22° halo.

The parhelion is a member of the family of halos caused by the refraction of sunlight by ice crystals in the atmosphere. The prerequisite ice crystals occur with cirrus or cirrostratus clouds. It is the occurrence and placement of these clouds that determine the parhelion appearance.

Parhelia typically appear as a pair of subtly colored patches of light, around 22° to the left and right of the Sun, and at the same altitude above the horizon as the Sun. However, they can also be extremely bright (mock suns) and one can be brighter than the other. At times, only one may occur.

They can be seen anywhere in the world during any season (ice crystal clouds occur at high altitudes where it is always cold), but are not always obvious or bright. Parhelia are best seen and most conspicuous when the Sun is near the horizon. This makes them more common in higher latitudes and in mid latitudes during the winter months when the sun is lower in the sky.

Parhelion have been observed and noted for many years. The term “parhelion” is derived from the Greek term for “beside the sun”. “Sun dog” is also traced back to ancient Greece with these bright spots seemingly “following” the sun (or Zeus) like a dog.

Although much less common, bright spots can occur with a very bright moon and are called paraselene. 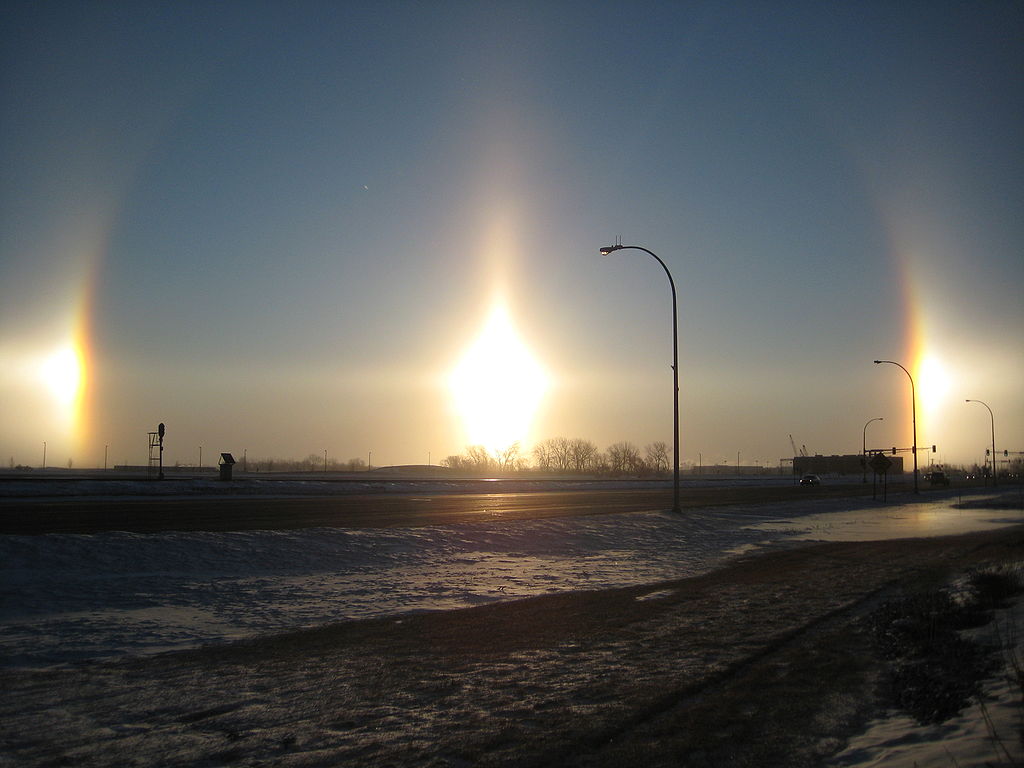 Parhelia in Fargo, North Dakota. Also visible are parts of the 22° halo (the arcs passing through each Parhelion), a sun pillar (the vertical line) and the parhelic circle (the horizontal line). Source: Wikicommons

Parhelia are commonly caused by the refraction and scattering of light from plate-shaped hexagonal ice crystals either suspended in high and cold cirrus or cirrostratus clouds, or drifting in freezing moist air at low levels as what is know as "diamond dust". The crystals act as prisms, bending the light rays passing through them with a minimum deflection of 22°. As the crystals gently float downwards with their large hexagonal faces almost horizontal, sunlight is refracted horizontally, and parhelia are seen to the left and right of the Sun. Larger plates wobble more, and thus produce taller parhelia.

Parhelia are red-colored at the side nearest the Sun; farther out the colors grade through oranges to blue. The colors overlap considerably and are muted, never pure or saturated. The colors of the parhelion finally merge into the white of the parhelic circle, the halo, (if the latter is visible).

The same plate-shaped ice crystals that cause parhelia are also responsible for the colorful circumzenithal arc, meaning that these two types of halo tend to co-occur. The latter is often missed by viewers, because it is located more or less directly overhead. Another halo variety often seen together with parhelia is the 22° halo, which forms a ring at roughly the same angular distance from the sun as the parhelia, thus appearing to interconnect them. As the Sun rises higher, the rays passing through the plate crystals are increasingly skewed from the horizontal plane, causing their angle of deviation to increase and the parhelia to move farther from the 22° halo, while staying at the same elevation.