A Passenger Boarding Bridge (PBB) (also known as an air bridge, jet bridge, jetway, and sky bridge as well as by other terms) is an enclosed, elevated passageway which extends from an airport terminal gate to an airplane. The PBB allows passengers to board and disembark an aircraft without the requirement to go outside or to be exposed to the elements. Passenger Boarding Bridges can be found in many configurations and may be fixed or movable depending upon the installation.

Moving passengers from the terminal to an aircraft, and from the aircraft back to the terminal, efficiently, expeditiously and safely is a major objective of efficient airport operations. At smaller airports and those with low traffic volume, passengers will often leave the terminal and walk outdoors across the apron to board the aircraft via mobile boarding stairs or, in some cases, airstairs if the aircraft is so equipped. Passengers may also be taken to a remote parking stand by bus but the final segment of their journey to the aircraft is still on foot from the bus to the aircraft. Ensuring passenger safety on the ramp is manpower intensive and becomes increasingly more difficult as passenger numbers or the volume of aircraft and consequent Ground Handling traffic increase. The use of Passenger Boarding Bridges mitigates most of the risks associated with the requirement to allow passengers to access the ramp.

In its earliest and most basic configuration, a Passenger Boarding Bridge consisted of a fixed platform, which may or may not have been height adjustable, connected to the terminal building by an enclosed bridge. The aircraft would follow the ground marshaller or the stand entry guidance and stop with the aircraft door abeam the platform. A retractable gantry would then be extended from the platform to allow passengers access to the aircraft. Although relatively rare, there are PBBs of this type still in use.

Passenger Boarding Bridges are now, more typically, mobile units which use an articulating mount to fasten them to the terminal at one end and are supported on powered wheels at the other end with the bridge between built as an extendable tube. This arrangement allows the bridge to be retracted and moved out of the aircraft safety zone during aircraft arrival and departure and, once the aircraft is parked and secure, manoeuvred by a trained operator to come in contact with the aircraft at the desired boarding door. These units are height adjustable to allow use with multiple aircraft types. 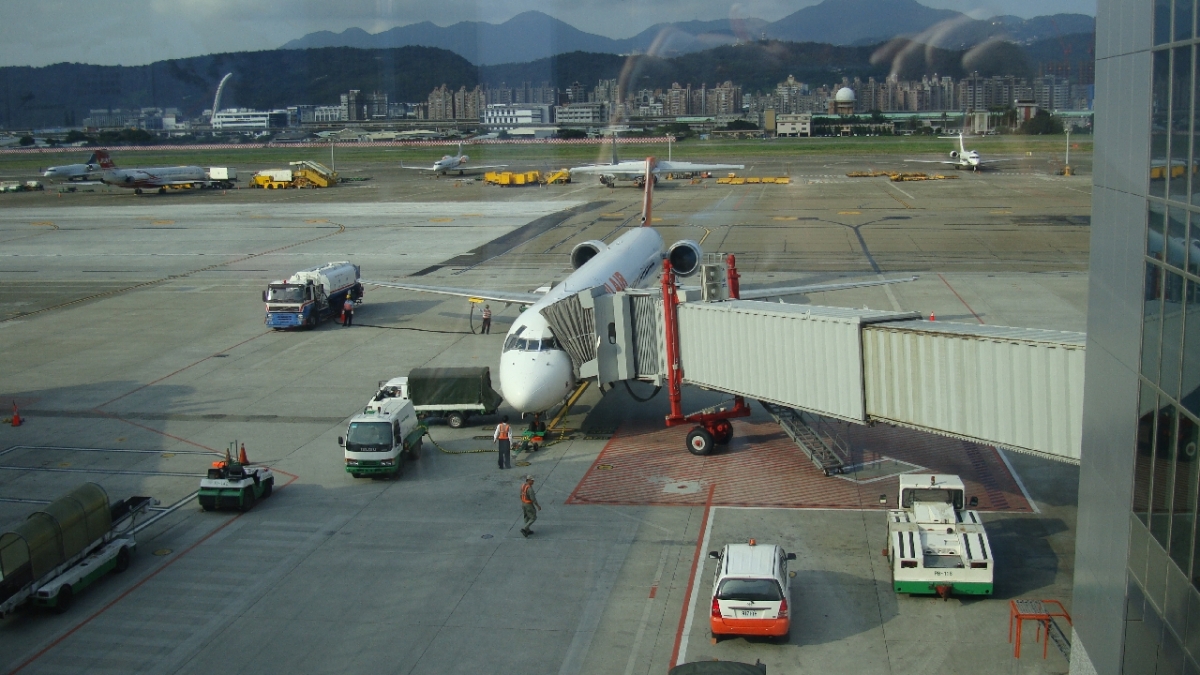 Further refinements of the PBB include split bridges which, from a common airport terminal access point, eventually divide into two passageways, each servicing a different aircraft door. Most of these are designed to accommodate two boarding doors forward of the wing on the same level as would be the case on large aircraft such as the Boeing 777 or the Airbus A330. However, there are split bridges that are designed to access doors on two levels to accommodate boarding of the Airbus A380 as well as some installations that have an "over-the-wing" capability to allow simultaneous boarding of the aircraft via both a forward and a rear door. Refinements in proximity sensors, which are mounted on the PBB, are also routinely being engineered to help prevent accidental aircraft damage due to abrupt contact by the moving bridge. 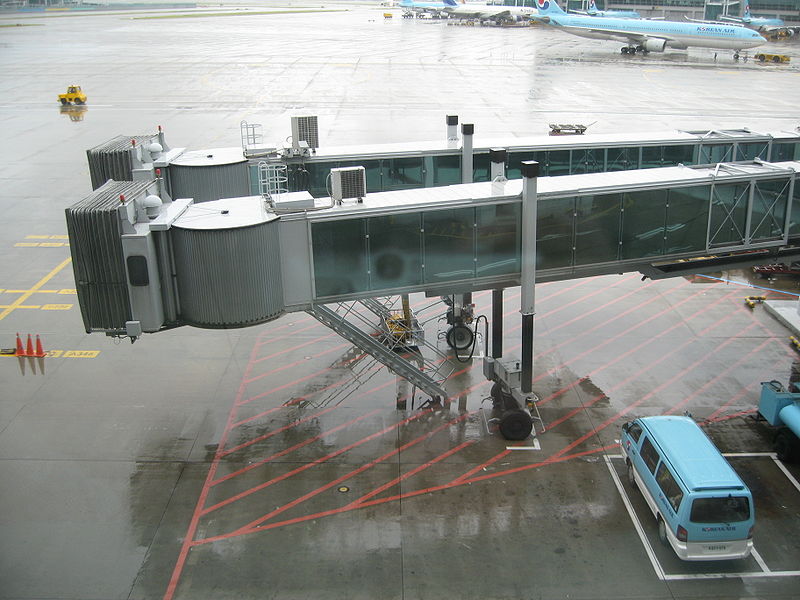 The advantages of a Passenger Boarding Bridge over mobile boarding stairs are numerous. These include:

The major risk associated with use of a Passenger Boarding Bridge is aircraft damage. This damage can be classified as follows:

There are also a number of disadvantages associated with the installation of a Passenger Boarding Bridge. Some of these are as follows:

On 12 December 2015, whilst a Boeing 737-800 was beginning disembarkation of passengers via an air bridge which had just been attached on arrival at Barcelona, the bridge malfunctioned, raising the aircraft nose gear approximately 2 metres off the ground. The door attached to the bridge then failed and the aircraft dropped abruptly. Prompt cabin crew intervention prevented all but two minor injuries. The Investigation found that the occurrence had been made possible by the failure to recognise new functional risks created by a programme of partial renovation being carried out on the air bridges at the Terminal involved.

On 14 June 1996, a Boeing 747SP being operated by Air China on a scheduled passenger flight from Beijing to Stockholm was arriving on the designated parking gate at destination in normal daylight visibility when it collided with the airbridge. None of the 130 occupants of the aircraft suffered any injury but the aircraft was substantially damaged and the airbridge was damaged .

On 11 December 2006, a Boeing 747SP being operated by Syrian Air on a scheduled passenger flight from Damascus to Stockholm was arriving on the designated parking gate at destination in normal visibility at night when it collided with the airbridge. None of the 116 occupants of the aircraft suffered any injury but the aircraft was substantially damaged and the airbridge was damaged .