The Planetary Boundary Layer (PBL) is the lowest part of the troposphere which is subject to direct earth-atmosphere influence because of its proximity to the surface of the earth. It is sometimes referred to as the Atmospheric Boundary Layer (ABL).

Surface friction, terrain and solar heating all influence, to varying degrees, that part of the atmosphere closest to the surface, leading to mechanical turbulence, convective activity and variation in wind direction and speed.

Air is a poor conductor of energy - which in Meteorology is basically in the form of heat. However, at levels near the surface of the Earth, solar heating and terrestrial cooling do affect the temperature of the air immediately above the Earth's surface. On hot summer days, for example, intense heating of the Earth's surface warms the air above said surface, which in turn changes the stability of the air.

Water, having a larger heat capacity than terrain, may heat the air with less intensity, and therefore land-sea wind flows are affected, resulting in the sea and land breezes.

The topography of the Earth's surface, be it hilly or flat, forested or grassy, etc, all affect the flow of air by way of direction and speed. Venturi effects due to orographic topography, for example, may speed up the wind, whereas forests may slow it down.

The above-mentioned examples are but a few of the many variables which affect air in the PBL. A combination of some or all variables is possible. PBL science is rather complex as a result, and comprises the study of micro-meteorology.

Depicted on weather charts, winds tend to follow isobars, as a result of the geostrophic wind theory which balances pressure gradient force with Coriolis force. However, in the PBL, due to friction with the Earth's surface, winds tend to “flow across” isobars at angles of up to 30 degrees and towards the region of lower pressure. Although the geostrophic wind theory is mainly representative of winds in mid-latitudes, friction effects on wind as described above is valid for all latitudes.

The thickness of the planetary boundary layer is rarely constant but does not usually exceed about 1000 metres / 3000 feet. Variation in thickness usually occurs on both a diurnal and a seasonal basis. At night, thickness will usually reach its diurnal minimum because a lower air temperature means that the atmosphere is more dense and therefore relatively more stable. The general tendency for wind speeds to be lower at night when there is already a much reduced opportunity for convection adds to that effect. In reverse, stronger wind speeds add to the likelihood of more vigorous convection in the daytime by increasing the extent to which air is mechanically mixed. The top of the boundary layer is often marked by a temperature inversion, especially at night.

Above this planetary boundary layer, turbulence due to Earth-atmosphere interaction is less marked and, in mid latitudes, the geostrophic wind prevails following the same path as isobars. The part of the atmosphere above the PBL is referred to as the Free Atmosphere. 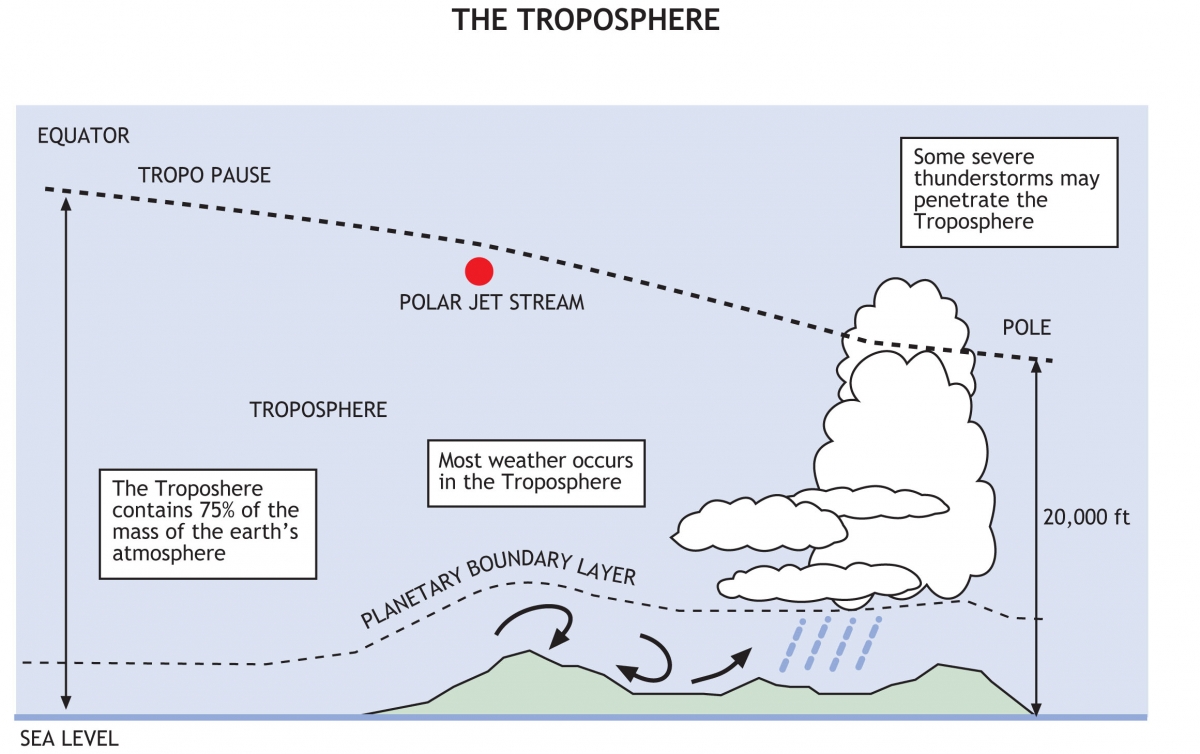 The Planetary Boundary Layer is the lowest part of the Troposphere where air properties become directly influenced by proximity to the surface of the Earth.