Polar stratospheric clouds (PSCs), also known as nacreous clouds from nacre, or mother of pearl, due to their iridescence, are clouds in the winter polar stratosphere.

PSCs are wave clouds. They are often found downwind of mountain ranges, which can induce gravity waves in the lower stratosphere. Their sheet-like forms slowly undulate and stretch as the waves evolve. The clouds can also be associated with very high surface winds, which may indicate the presence of, or induce, winds and waves in the stratosphere. 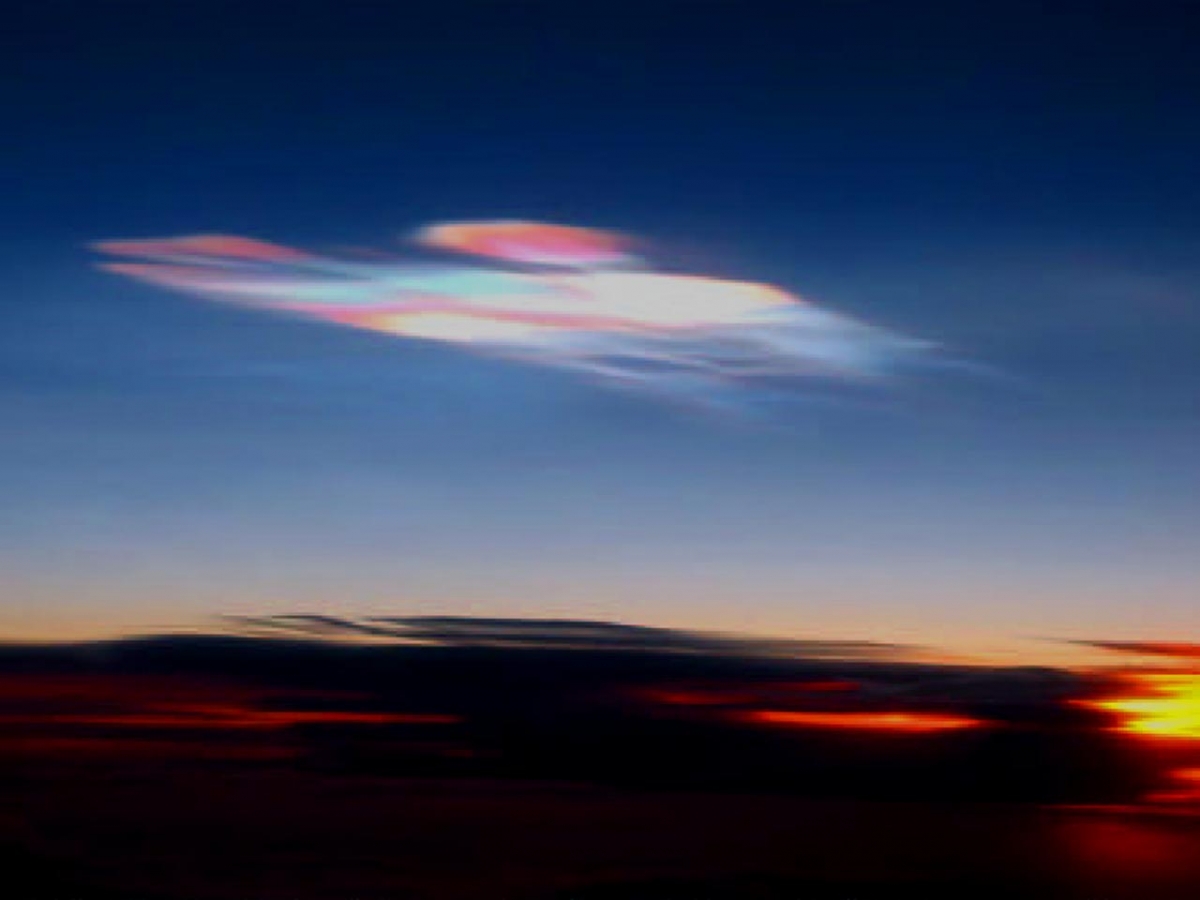 PSCs form at temperatures of around -85°C, colder than average lower stratosphere temperatures, and are comprised of ice particles ~10µm across. The clouds must be composed of similar sized crystals to produce the characteristic bright iridescent colours by diffraction and interference.

PSCs form at very high altitudes, between 15 and 25 km (about 50,000 to 80,000 feet). Only at very low temperatures is there enough condensation to produce clouds in the extremely dry air at these altitudes. Sometimes in winter near the North or South Pole, temperatures in the lower stratosphere get lower enough for PSCs to form.

One theory suggests that strong winds in the troposphere can induce mountain waves when orographic features are encountered. These waves may propogate upward into the stratosphere where the lifting and cooling produced can generate PSCs.

PSCs are more common near the South Pole, which is typically colder, but recently PSCs have been observed near the North Pole.

PSCs are classified into Types I and II according to their chemical composition, which can be measured using LIDAR. The technique also determines the height and ambient temperature of the cloud.

Only Type II clouds are necessarily nacreous whereas Type I clouds can be iridescent under certain conditions, just as any other cloud.

PSCs as a cause of destruction of stratospheric ozone

PSCs were long regarded as curiosities and of no real consequence. However, Type I clouds are now known as sites of harmful destruction of stratospheric ozone over the Antarctic and Arctic. Their surfaces act as catalysts that convert more benign forms of human-made chlorine into active free radicals (for example ClO, chlorine monoxide). During the return of spring sunlight these radicals destroy many ozone molecules in a series of chain reactions. Cloud formation is doubly harmful because it also removes from the stratosphere gaseous nitric acid that would otherwise combine with ClO to form less reactive forms of chlorine.

If the PSCs are the result of mountain waves, the turbulence typically associated with these waves can extend all the way into the stratosphere.