Convective cloud triggered by a heat source on the surface.

A forest fire, volcano, or similar large heat source can cause the formation of cumulus type clouds. In extreme cases the cloud may develop into a Cumulonimbus (Cb) cloud.

The “mushroom cloud” which is a characteristic of a nuclear explosion is a form of pyrocumulus cloud. 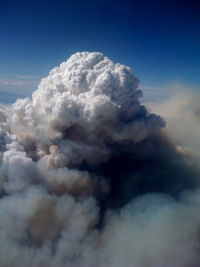 As the heat source (the fire or “pyro” which gives pyrocumulus its name) heats the air, the air rises and then expands and cools. If the air's liquid water content is such that the dewpoint temperature during the cooling is reached, condensation and cloud formation occurs. The air is very unstable due to the effect of the heat source and so the formation is cumuloform.

Depending on the stability and liquid content of the air the pyrocumulus cloud may range from a small cumulus cloud to cumulonimbus, producing lightning. The heat source may also add liquid content into the air, as for example a volcano or man-made combustion. The cloud colour may range from white to a beige brown, depending on the chemical content of the air.

Rain and microbursts/downbursts, icing, may also occur within the pyrocumulus cloud, along with the associated severe turbulence.

Practical example: Although it rarely produces cumulus clouds, a natural gas factory located about 3 miles south of Venice airport has a chimney close to the final approach axis, and approach charts to Venice caution flight crew about severe turbulence if the chimney is lit, indicating natural gas burn.