Arrestor Gear installations using cables are integral to the routine operation of military aircraft from aircraft carrier decks and from runways. Whilst some of the references at the end of this article include detailed information on military use of such systems, the purpose here is to consider the operational safety implications for civil aircraft which take off or land on those runways used by both civil and military aircraft which have cable-type arrestor gear installed. These systems are found worldwide at both civil airports where tactical military aircraft are accepted and at military bases where civil operations are permitted.

A typical installation consists of a single cable spanning the runway towards one or both ends. When required, it is engaged by a hook fitted to many tactical military aircraft. These cables are typically 2.5 to 3.2 cm in diameter and when 'rigged and up' or in situ, are typically suspended at approximately 7.5 cm above the pavement surface by 15cm diameter rubber 'donuts' spaced along their length. However, some versions of the system can be retracted by remote control into an adjacent groove in the runway surface when not operationally required and thus the full length of the runway is restored to a normal condition. 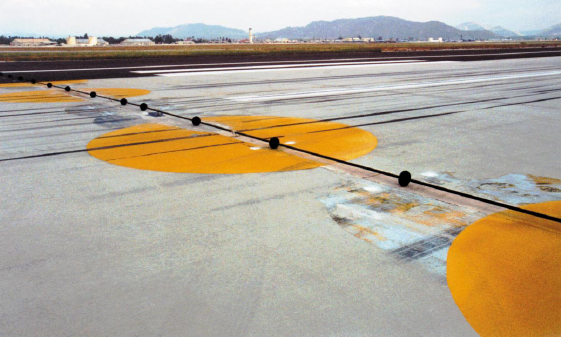 Three main factors determine where the cables are located on runways:

Typical locations for cables are shown in the diagram below:

The nose landing gear of some older transport aircraft types is fitted with gravel or spray/FOD deflectors. If these deflectors come into contact with the arrestor cable, they may shatter and create FOD hazardous to subsequent aircraft if not removed. Earlier model Boeing 737s which operated on gravel runways and all the MD 80/90 series/Boeing 717 are equipped with nose gear mounted deflectors. The 737 gravel deflectors have a ground clearance of as little as 2 cm but the MD 80/90 and Boeing 717 spray/FOD deflectors have a minimum clearance of 9 cm.

If a cable is not retractable, it can sometimes be disconnected and moved to the side of the runway when not required or alternatively, the 'donuts' supporting it in the functional or raised position can sometimes be moved along the cable to the sides of the runway, thereby allowing the cable (still under tension) to lie flush with the surface in a 'rigged and down' condition allowing landing gear to safely pass over it.

The option of a reduction in the declared length of a runway for civil aircraft is also possible by use of displaced landing threshold, but the landing performance must then be re-assessed. The risk of cable interference at the upwind end of the runway in the case of a rejected take off or the end of a landing roll is generally discounted due to the lower groundspeed at that point - typical aircraft manufacturer advice is to ensure that if crossing 'rigged and up' cables is unavoidable, it is done at a groundspeed of not more than 60 knots.

These two requirements are depicted in the diagram below which was taken from the FAA AC 150/5220-9A 'Aircraft arresting systems on civil airports'.

If a temporary aircraft arresting system cable is installed across a runway used by civil aircraft, FAA requirements are that an appropriately displaced threshold must be established.

Although ICAO Annex 14 does not contain specific requirements for identification of the location of raised 'rigged and up' arrestor cables, at night they would constitute an obstruction and, as such, would require illumination. This is usually provided by an illuminated circle of the type required by the FAA.

Note that the U.S. term for arrestor cable installations is 'BAK' - derived from 'barrier arresting systems' but there are many other terms in use.

It is generally recognised that operations which involve regular crossing of 'rigged and up' cables are likely to increase both tyre wear and the risk of tyre damage, such that regular and careful inspection of the landing gear and tyres is warranted.