The scale was developed in 1971 by civil engineer Herbert Saffir and meteorologist Robert Simpson, who at the time was director of the U.S. National Hurricane Center (NHC).

The scale separates hurricanes into five different categories based on wind. The U.S. National Hurricane Center classifies hurricanes of Category 3 and above as major hurricanes, and the Joint Typhoon Warning Center (JTWS) classifies typhoons of 150 mph or greater (strong Category 4 and Category 5) as super typhoons (although all tropical cyclones can be very dangerous). Most weather agencies use the definition for sustained winds recommended by the World Meteorological Organization (WMO), which specifies measuring winds at a height of 33 ft (10.1 m) for 10 minutes, and then taking the average. By contrast, the U.S. National Weather Service, Central Pacific Hurricane Center and the Joint Typhoon Warning Center define sustained winds as average winds over a period of one minute, measured at the same 33 ft (10.1 m) height, and that is the definition used for this scale.

The scale is roughly logarithmic, like the Richter Scale for earthquakes. A typical Category 2 storm could produce 10 times the damage of a typical Category 1 because wind power or force increases exponentially with increases in wind speed and therefore, so does potential damage.

The SSHWS only pertains to the maximum wind speeds of a tropical cyclone at a particular time. The original Saffir-Simpson Hurricane Scale included central pressure and storm surge. Pressure information is now considered superfluous for the public. Storm surge, although related to wind speed, is affected by too many other factors to be a direct relationship. For storms that make land fall, there will be separate predictions and warnings about storm surge and other storm-related threats including rain-produced flooding and tornadoes which are not related at all to storm intensity. 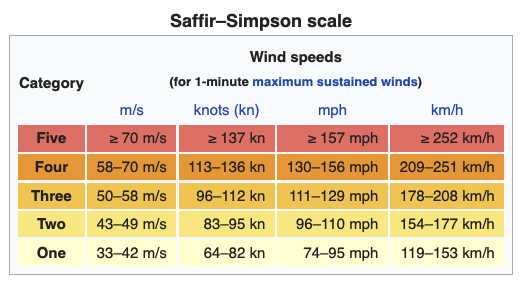 Category 1 storms usually cause no significant structural damage to most well-constructed permanent structures; however, they can topple unanchored mobile homes, as well as uproot or snap weak trees. Poorly attached roof shingles or tiles can blow off. Power outages are typically widespread to extensive, sometimes lasting several days. Even though it is the least intense type of hurricane, they can still produce widespread damage and can be life-threatening storms.

Storms of Category 2 intensity often damage roofing material (sometimes exposing the roof) and inflict damage upon poorly constructed doors and windows. Poorly constructed signs can receive considerable damage and many trees are uprooted or snapped. Mobile homes, whether anchored or not, are typically damaged and sometimes destroyed, and many manufactured homes also suffer structural damage. Small craft in unprotected anchorages may break their moorings. Extensive to near-total power outages and scattered loss of potable water are likely, possibly lasting many days.

Tropical cyclones of Category 3 and higher are described as major hurricanes in the Atlantic or Eastern Pacific basins. These storms can cause some structural damage to small residences and utility buildings, particularly those of wood frame or manufactured materials with minor curtain wall failures. Buildings that lack a solid foundation, such as mobile homes, are usually destroyed, and gable-end roofs are peeled off. Manufactured homes usually sustain severe and irreparable damage. A large number of trees are uprooted or snapped, isolating many areas. Near-total to total power loss is likely for up to several weeks and water will likely also be lost or contaminated.

Category 4 hurricanes tend to produce more extensive curtainwall failures, with some complete structural failure on small residences. Heavy, irreparable damage and near complete destruction of gas station canopies and other wide span overhang type structures are common. Mobile and manufactured homes are often flattened. Most trees, except for the heartiest, are uprooted or snapped, isolating many areas. Total and long-lived electrical and water losses are to be expected, possibly for many weeks.

Category 5 is the highest category of the Saffir–Simpson scale. These storms cause complete roof failure on many residences and industrial buildings, and some complete building failures with small utility buildings blown over or away. Collapse of many wide-span roofs and walls, especially those with no interior supports, is common. Very heavy and irreparable damage to many wood frame structures and total destruction to mobile/manufactured homes is prevalent. Only a few types of structures are capable of surviving intact. They include office, condominium and apartment buildings and hotels that are of solid concrete or steel frame construction, multi-story concrete parking garages, and residences that are made of either reinforced brick or concrete/cement block and have hipped roofs with slopes of no less than 35 degrees from horizontal and no overhangs of any kind, and if the windows are either made of hurricane-resistant safety glass or covered with shutters. Unless all of these requirements are met, the absolute destruction of a structure is certain.

Virtually all trees are uprooted or snapped and some may be debarked, isolating most affected communities. Massive evacuation of residential areas may be required if the hurricane threatens populated areas. Total and extremely long-lived power outages and water losses are to be expected, possibly for up to several months.