Simultaneous Close Parallel PRM Approach are independent approaches conducted to runways with centreline spacing of less than 4300 feet (1310m) but at least 3000' (915m). PRM is an acronym for the high update rate Precision Runway Monitor surveillance system which is required to monitor the No Transgression Zone (NTZ) for specific parallel runway separations used to conduct simultaneous close parallel approaches. PRM is published in the title as part of the approach name for Instrument Approach Procedures (IAP) used to conduct Simultaneous Close Parallel approaches. “PRM” also alerts pilots that specific airborne equipment, training, and procedures are applicable.

An overview of Simultaneous Close Parallel PRM approaches is provided in the following diagram. 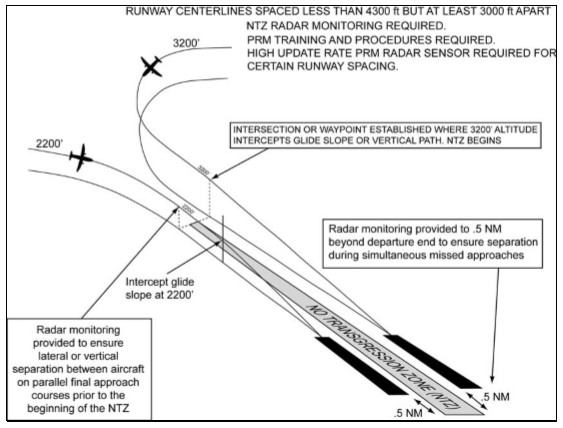 Note that aircraft will be separated laterally or vertically prior to the beginning of the NTZ and that the NTZ monitoring continues past the missed approach point (MAP) to ensure aircraft separation in the event of simultaneous missed approaches.

One of the unique features of Simultaneous Close Parallel PRM Approaches concerns the "breakout" protocol. Because of the close proximity of aircraft on adjacent approaches, should an aircraft on approach blunder into the NTZ, it will be the aircraft on the opposite approach that will be given breakout instructions by ATC.

Pilots must complete special training before accepting a clearance for a simultaneous close parallel ILS PRM, RNAV PRM, GLS PRM or LDA PRM approach. Operators must be approved for Simultaneous Close Parallel PRM Approach procedures by their NAA. Commercial operators will detail the specific training requirements in their Company Operations Manual in accordance with their approved Operations Specification (Ops Spec) for PRM approaches. Non commercial operators must be familiar with the content of the FAA Aeronautical Information Manual (AIM) pertaining to PRM operations. As a minimum, the training must include viewing of the FAA video (or equivalent) ILS PRM AND SOIA APPROACHES: INFORMATION FOR GENERAL AVIATION PILOTS.

The final approach courses of Simultaneous Close Parallel Approaches are monitored by two monitor controllers, one for each approach course. The NTZ monitoring system consists of:

Multiple PRM approach charts at the same airport have a single associated AAUP. This page must be referred to in preparation for conducting the approach. Bullet points are published summarising the PRM procedures which apply to each approach and these must be briefed as part of the approach briefing. The following information may be summarized in the bullet points or published in more detail in the Expanded Procedures section of the AAUP. Briefing on the Expanded Procedures is optional. Bullet points on the AAUP include: