Simultaneous Offset Instrument Approach (SOIA) is a procedure used to conduct simultaneous approaches to runways spaced less than 3,000' (915m), but at least 750' (230m) apart. The SOIA procedure utilizes an ILS PRM approach to one runway and an offset Localizer Type Directional Aid (LDA) PRM approach with glide slope or an RNAV PRM or GLS PRM approach utilizing vertical guidance to the adjacent runway. SOIA require No Transgression Zone (NTZ) monitoring, special pilot training and a dedicated Attention All Users Page (AAUP) as described in the Simultaneous Close Parallel PRM Approach article. ATC directed breakout procedures are in force. Whilst there are many common procedures and similarities between SOIA and Simultaneous Close Parallel Approaches, there are also some notable differences.

Runway Spacing - The most fundamental difference between Simultaneous Offset Instrument Approaches and Close Parallel ILS PRM Approaches is the runway centreline spacing. The less than 3000' spacing between the two runways disallows the use of parallel final approach courses. To ensure adequate separation between aircraft, one runway is serviced by an ILS aligned with the runway centerline whilst the approach to the opposite runway is offset by 2.5 to 3 degrees from runway heading and, depending upon runway separation, may be significantly displaced from the runway centreline abeam the runway threshold. However, given this configuration, aircraft on opposite approaches will converge laterally as they approach the airport.

Abbreviated NTZ - The No Transgression Zone associated with a SOIA is significantly different from that of the Close Parallel ILS PRM Approach. Whist the monitored NTZ for a PRM approach extends from the approach zone through the runways and continues for the first .5 nm of the missed approach area, the NTZ for SOIA is confined to the approach zone only and ends when the approach course centreline separation is reduced to 3000'. This configuration is depicted in the following diagram. 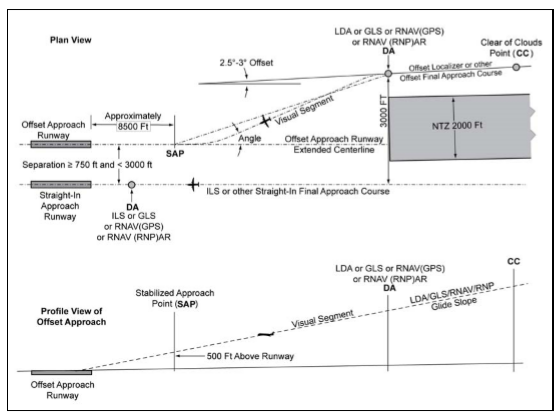 Visual Segment - The final segment of the offset approach, from the point that the NTZ ends, most be flown using visual references. Information on the Attention All Users Page (AAUP) will include the minimum ceiling and visibility requirements to allow SOIA approaches to runways spaced less than 3000' apart. The "clear of cloud" point will be above the decision altitude for the offset approach allowing the pilots opportunity to visually acquire the landing environment and any traffic on the straight-in approach to the other runway.

or a missed approach must be executed.

SOIA approach procedures are conducted at the following airports: