The term Sirocco is an all-inclusive name given to southeast to southwest winds originating as hot, dry desert-air over Northern Africa that can become hot and subsequently humid while flowing northward into the southern Mediterranean basin. 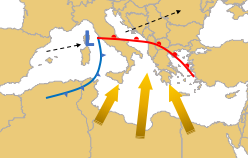 Siroccos occur in advance of surface and upper level depressions moving eastward across the southern Mediterranean Sea or northern Africa. These cyclones originate either over North Africa or sometimes south of the Alps, primarily in the Gulf of Genoa in the latter case.

Depending on where you are, the Sirocco displays substantially different characteristics and has many different local names, too. Along the northern African coast the hot air originates directly from the Sahara Desert, producing hot, dry and dusty conditions. Visibility becomes very poor and the fine blowing dust can cause damage to instruments and equipment. On rare occasions the Sirocco picks up enough dust and sand to produce sandstorms.

As the air travels northward across the Mediterranean Sea, depending on the speed of the flow and the length of its trajectory over water, it may have totally different characteristics when it reaches the southern European coast. With a short, quick trip across the Mediterranean, the air can remain very warm, dry, and still dust laden producing similar problems as it did over North African countries. Extreme temperature differences (up to 20°C) may occur with the following cold front and its dust may reach even Britain and northern Europe.

With a longer trajectory, the Sirocco picks up much moisture because of its high temperature, and reaches Spain (known as Leveche, Solano, Jaloque or Xaloque), Portugal as Xaroco, France as Marin, Malta, Sicily, southern Italy as Scirocco, and Croatia as Jugo.

As it travels northward, the Sirocco causes cloud, fog and rain over northern Mediterranean areas. The sweltering, sultry and close weather during a Sirocco event causes headaches and insomnia for many. The hot humid wind causes overnight temperatures of 30°C and above, while thermometers may well reach 40°C during daytime.

Sirocco events tend to occur year-round without a favoured month or season. However, strong gale-force siroccos are most common during the spring. The average duration of continuous gale force winds during a Scirocco is 10 to 12 hours and occasionally as long as 36 hours. The onset of a gale-force Sirocco often occurs as a surface low moves into the Gulf of Gabes from Tunisia, combined with the passage of a deep 500 mb trough extending well into north Africa and positioned west of the Gulf of Gabes.