South Atlantic tropical cyclones are unusual weather events that occur in the Southern Hemisphere. Strong wind shear in the Troposphere, which disrupts the formation of these cyclones, as well as a lack of weather disturbances favourable for development in the South Atlantic Ocean (such as the tropical waves common the in the southern North Atlantic) make any strong tropical system extremely rare. The Inter Tropical Convergence Zone (ITCZ), another potential breeding ground, drops one to two degrees south of the equator, not far enough from the equator for the spin of the Coriolis force to aid development. Water temperatures in the tropics of the southern Atlantic are cooler than those in the tropical north Atlantic.

For many years, meteorologists believed tropical cyclones could not form in the South Atlantic Ocean and, in fact, none had ever been recorded. But in 1991, a tropical cyclone formed in the eastern South Atlantic but dissipated before reaching hurricane strength. Then in 2004, Catarina formed off the coast of Peru and intensified into a full-fledged hurricane.

More common are subtropical cyclones. These low pressure areas have characteristics of both tropical and extratropical systems. They develop when an extratropical system moves over relatively warm water, thus losing low-level temperature contrasts and fronts. However, cold temperatures aloft promote a large area of convection to develop, typical of a tropical cyclone. But the convection is asymmetric and is well displaced from the circulation center unlike tropical counterparts.

Rarely, if the subtropical low sits over warm water long enough, it becomes a totally warm core low with convection symmetrically surrounding the center. It has transitioned into a tropical cyclone.

Hurricane Catarina is the only recorded South Atlantic hurricane in history. Nevertheless, although infrequent, significant tropical and subtropical cyclones affect the Brazilian coastal states of Rio de Janeiro, Sao Paulo, and Santa Caterina during the months from November to May. 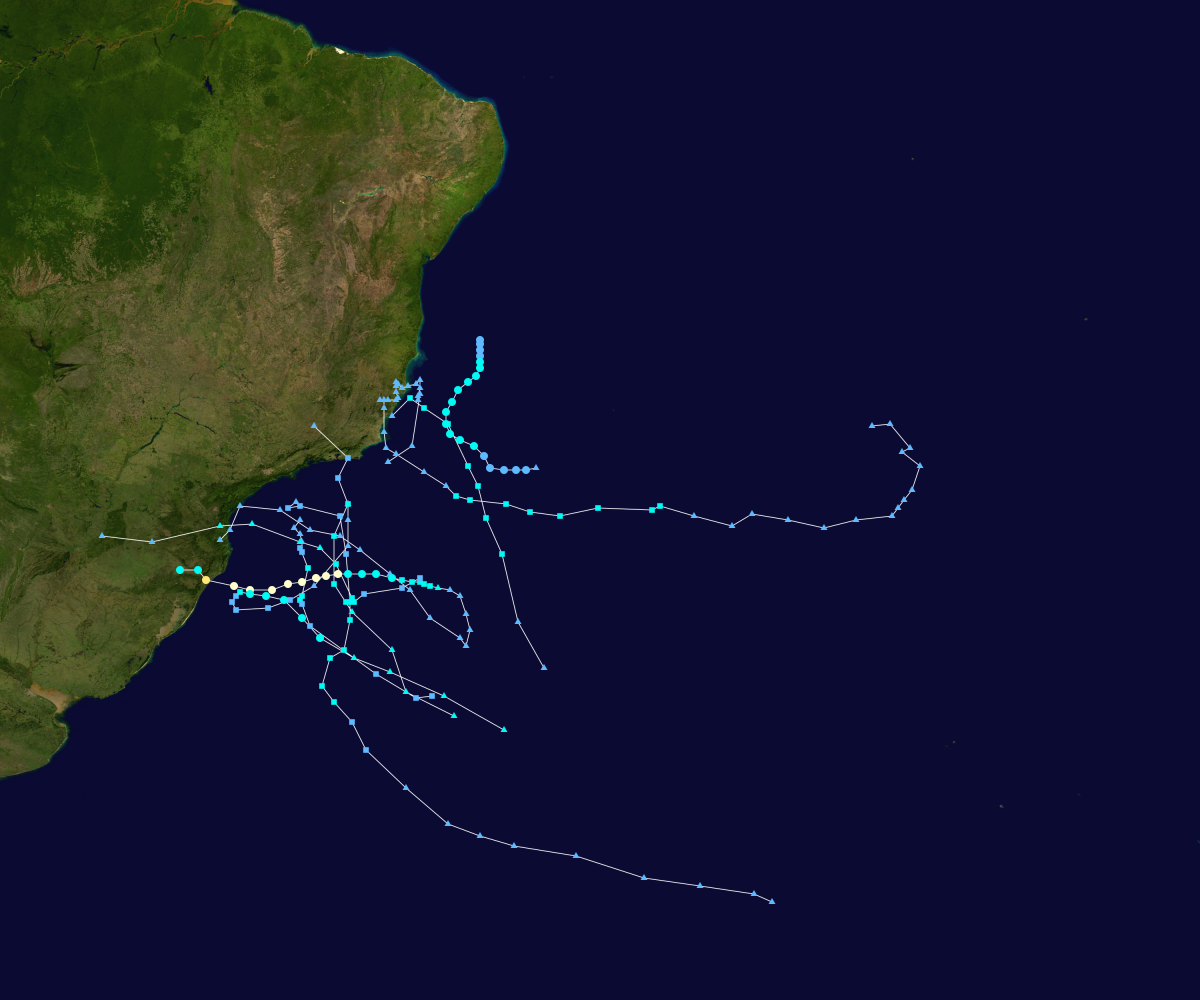 Track map of all significant systems of the South Atlantic tropical cyclone. The points show the location of the storm at 6-hour intervals. Source: Wikicommons

Hurricane Catarina was an extraordinarily rare hurricane-strength tropical cyclone that formed in the southern Atlantic Ocean in March 2004. Just after becoming a hurricane, it hit the southern coast of Brazil in the state of Santa Catarina on the evening of March 28, with winds estimated near 155 kilometres per hour (96 mph), making it a Category 2-equivalent on the Saffir-Simpson Hurricane Wind Scale (SSHWS). 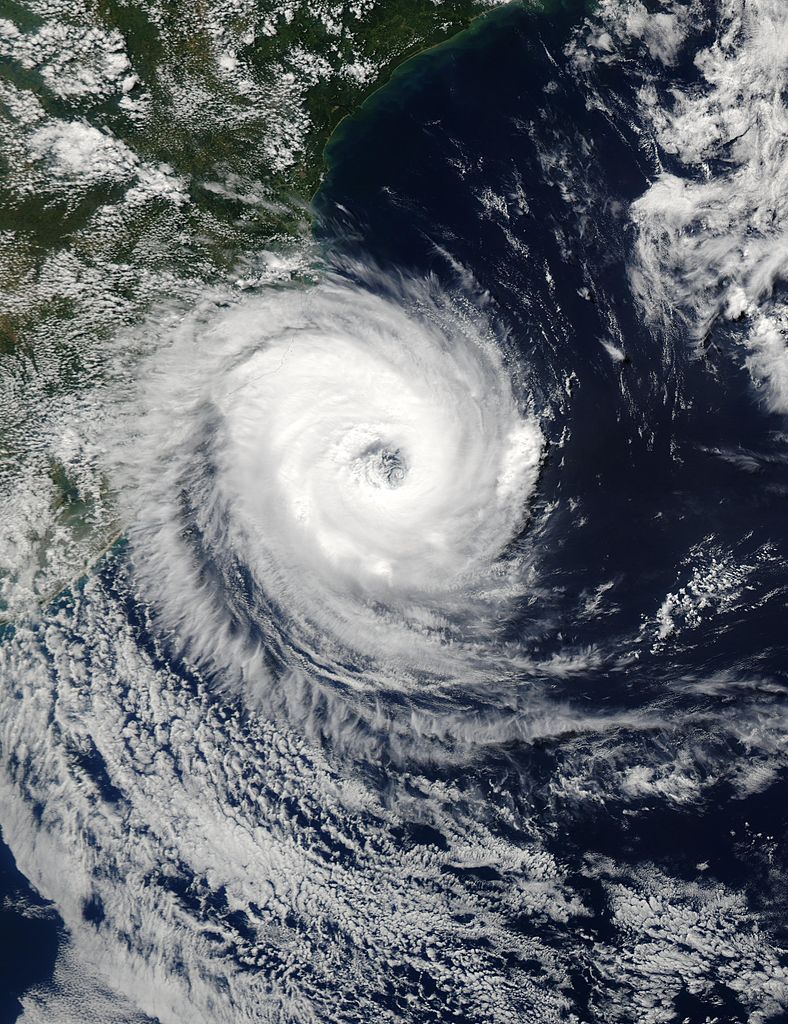 The storm developed out of a stationary cold-core upper-level trough on March 12. A week later, on March 19, a disturbance developed along the trough and travelled toward the east-southeast until March 22 when a ridge stopped the forward motion of the disturbance. The disturbance was in an unusually favorable environment with a slightly below-average wind shear and above-average sea surface temperatures. The combination of the two led to a slow transition from an extratropical cyclone to a subtropical cyclone by March 24. The storm continued to obtain tropical characteristics and became a tropical storm the next day while the winds steadily increased. The storm attained wind speeds of 75 mph (equivalent to a low-end Category 1 hurricane on the Saffir–Simpson scale) on March 26. At this time it was unofficially named Catarina and was also the first hurricane-strength tropical cyclone ever recorded in the Southern Atlantic Ocean. Unusually favorable conditions persisted and Catarina continued to intensify and was estimated to have peaked with winds of 100 mph (155 km/h) on March 28. The center of the storm made landfall later that day at the time between the cities of Passo de Torres and Balneário Gaivota, Santa Catarina. Catarina rapidly weakened upon landfall and dissipated on the next day.

Because Catarina was the first tropical cyclone to make landfall in Brazil since the beginning of reliable records, and hence infrastructure and the population were not specifically prepared for it, the damage was quite severe. Catarina destroyed 1,500 homes and damaged around 40,000 others. Agricultural products were severely damaged: 85% of the banana crops and 40% of the rice crops were lost in the storm. Three people were confirmed to have died in the storm and 185 others were injured. Damages from the storm amounted to US$350 million (value in 2004).