The South Pacific Convergence Zone (SPCZ) is a persistent band of cloudiness and storms, a 200-400 km broad zone that originates in Southeast Asia and stretches southeast to French Polynesia and the Cook Islands. The SPCZ is the Southern Hemisphere’s most expansive and persistent rain band, and is the largest and most persistent spur of the Intertropical Convergence Zone (ITCZ). It is also the only spur that does not result from heating over land during the summer. The SPCZ is most active in the southern hemisphere summer, but it is present year-round. 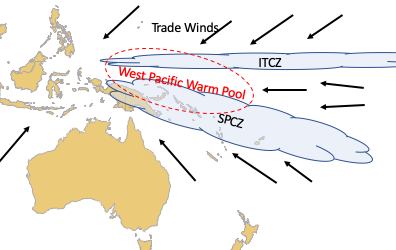 Impact on weather in the South Pacific

The SPCZ can affect the precipitation on Polynesian islands in the southwest Pacific Ocean, so it is important to understand how the SPCZ behaves with large-scale, global climate phenomenon, such as the ITCZ, El Niño–Southern Oscillation, and the Interdecadal Pacific oscillation (IPO), a portion of the Pacific decadal oscillation. Rainfall varies greatly by season in the Central South Pacific sub-region: approximately 75% of annual rainfall occurs from November to April, when the SPCZ is located about halfway between Western Samoa and Fiji. During the dry season, the SPCZ moves out of the area, and often becomes weak or inactive

It is believed that the SPCZ is composed of two parts. The equatorward section contains tropical convection due to convergence in the wind field where the southeast trades from transitory anticyclones to the south meet with the semi-permanent easterly flow from the eastern South Pacific anticyclone. The poleward part which extends into the subtropics is believed to be generated by mid-latitude systems which migrate and eventually dissipate here.

The SPCZ exists in summer and winter but can change its orientation and location. It is often distinct from the ITCZ, which is over Australia in teh summer, but at times they become one continuous zone of convergence. The location of the SPCZ is affected by ENSO and Interdecadal Pacific oscillation conditions. It generally stretches from the Solomon Islands through Vanuatu, Fiji, Samoa, and Tonga. Thunderstorm activity, or convection, within the band is dependent upon the season, as the more equatorward portion is most active in the Southern Hemisphere summer, and the more poleward portion is most active during transition seasons of fall and spring. The convergence zone shifts east or west depending on the existence of El Niño, or the phase of ENSO.

The SPCZ is fuelled by moisture from the west pacific warm pool (also referred to as the warm western Pacific basin), and is most active from October to April (during the Southern Hemisphere summer) due to propagated monsoon activity from India.