The requirement that air traffic controllers accommodate, in the same airspace volume, a mix of civil and State military flights, often performed in formations, has significant operational consequences. In RVSM airspace there is a requirement to selectively apply two distinct vertical separation minima, 1000 ft and 2000 ft respectively. This requirement necessitates that air traffic controllers have full awareness of the status of aircraft operating in the same airspace volume or in close proximity. The selective application of a set of separation minima increases controller’s workload considerably.

Formation flight is defined as more than one aircraft operating as a single aircraft with regard to navigation and position reporting. Provisions in ICAO Annex 2, Section 3.1.8 "Formation Flights" state:

"Aircraft shall not be flown in formation except by prearrangement among the pilots-in-command of the aircraft taking part in the flight and, for formation flight in controlled airspace, in accordance with the conditions prescribed by the appropriate ATS authority(ies). These conditions shall include the following:

a) the formation operates as a single aircraft with regard to navigation and position reporting;

c) a distance not exceeding 1 km (0.5 NM) laterally and longitudinally and 30 m (100 ft) vertically from the flight leader shall be maintained by each aircraft;"

ICAO Procedures for Non-RVSM Approved/State Aircraft during operations in, or vertical transit through, RVSM Airspace

1. During operations in or vertical transit through RVSM airspace with aircraft not approved for RVSM operations, pilots shall report non-approved status using the phraseology NEGATIVE RVSM (with supplementary information if applicable, e.g. State Aircraft) as follows:

a) at initial call on any channel within RVSM airspace;

b) in all requests for level changes; and

c) in all read-backs of level clearances.

However, in order to reduce the workload impact on controllers of handling non-RVSM approved State aircraft, national/military authorities are strongly encouraged to make their transport/tanker fleets compliant with RVSM MASPS[1]. This recommendation relates in particular to those State aircraft which operate on a regular basis as General Air Traffic (GAT) in the RVSM airspace.

The amendment to the ATM chapter of the NATO ATM Committee Handbook contains:

"National and military authorities are encouraged to make their transport State aircraft fleet compliant with MASPS. However, this retrofit action is technically complex, needs time, and has significant financial consequences”.

Currently, the majority of State aircraft are non-RVSM compliant.

Though not specifically mentioned in all aeronautical information publications (AIP), in Europe it is generally assumed that a vertical separation minimum of 2000 feet is to be applied between formation flights and other flights above FL290. (See Figure 1) 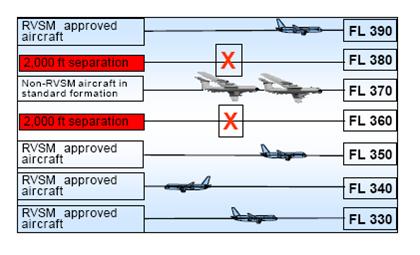 Figure 1. Formation flights separated by 2000 ft from other traffic above FL290

With the implementation of domestic RVSM (DRVSM) within the U.S. National Airspace System, the FAA and Department of Defence (DoD) provided recommendations for improvements and changes to RVSM separation minima procedures. The recommendation to provide RVSM separation to formation flights including only RVSM compliant aircraft was accepted by FAA with Notice 7110.406 during May 2005. FAA argues that providing RVSM separation to formation flights comprised completely of RVSM compliant aircraft contributes to more efficient use of airspace and reduces the impact on air traffic controllers. (See Figure 2) 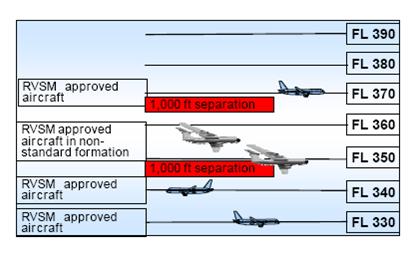 A separation standard of 2,000 feet is applied above FL290 to all formation flights, which include an RVSM non-compliant aircraft.

It is generally assumed that 1000 feet vertical separation minimum is applied below FL290 to formation flights and State aircraft. Specific separation minima may be provided in State AIPs publication.