Surface pressure charts show the surface pressure pattern using isobars (lines of equal pressure) and indicate areas of high (H) and low pressure (L) along with their central pressure value at a "synoptic" scale, that is to say at a large scale which shows migratory pressure systems and related fronts on a single chart. 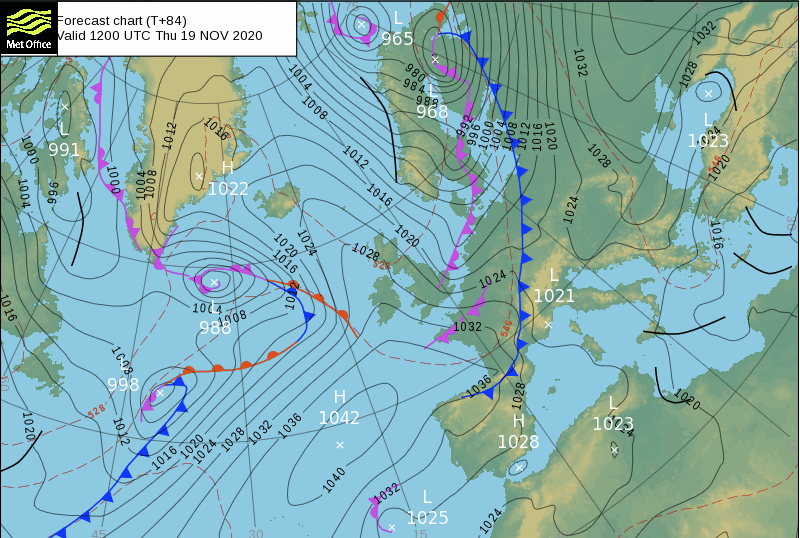 An analysis chart, which shows the observed state of the weather, is issued by the UK Met Office along with forecast charts up to five days ahead. These are updated every 12 hours around 0730 UTC and 1930 UTC, with the exception of charts for days four and five which are only issued once per day at 1930 UTC. The reason that these two charts are only issued once a day is because that far ahead the forecast surface pressure pattern will change more significantly, due to uncertainty at this longer time period, and there is limited value in updating it every 12 hours.

While most surface analysis charts are computer generated, some weather offices will create their own local analysis. The starting point is a map with station observations plotted. A station model is plotted at each point of observation. Within the station model, the temperature, dewpoint, wind speed and direction, atmospheric pressure, pressure tendency, and ongoing weather are plotted. The circle in the middle represents cloud cover; fraction it is filled in represents the degree of overcast. Outside the United States, temperature and dewpoint are plotted in degrees Celsius. The wind barb points in the direction from which the wind is coming. Each full flag on the wind barb represents 10 knots (19 km/h) of wind, each half flag represents 5 knots (9 km/h). When winds reach 50 knots (93 km/h), a filled in triangle is used for each 50 knots (93 km/h) of wind. In the United States, rainfall plotted in the corner of the station model are in inches. The international standard rainfall measurement unit is the millimeter. Once a map has a field of station models plotted, the analyzing isobars (lines of equal pressure), isallobars (lines of equal pressure change), isotherms (lines of equal temperature), and isotachs (lines of equal wind speed) are drawn. The abstract weather symbols were devised to take up the least room possible on weather maps.