Surveillance radar. Radar equipment used to determine the position of an aircraft in range and azimuth.

Situation display. An electronic display depicting the position and movement of aircraft and other information as required.

The concept of surveillance is to have a sensor (or a network of sensors) that detects aircraft, calculates their position, obtains other data (such as identification, level, etc.) and then presents it to the controller on a situation display. The main applicaitons of surveillance are Area control and Approach control, although it is possible to use it in the tower (e.g. A-SMGCS) or in uncontrolled airspace where Advisory Service, Flight Information Service or Alerting Service are provided. 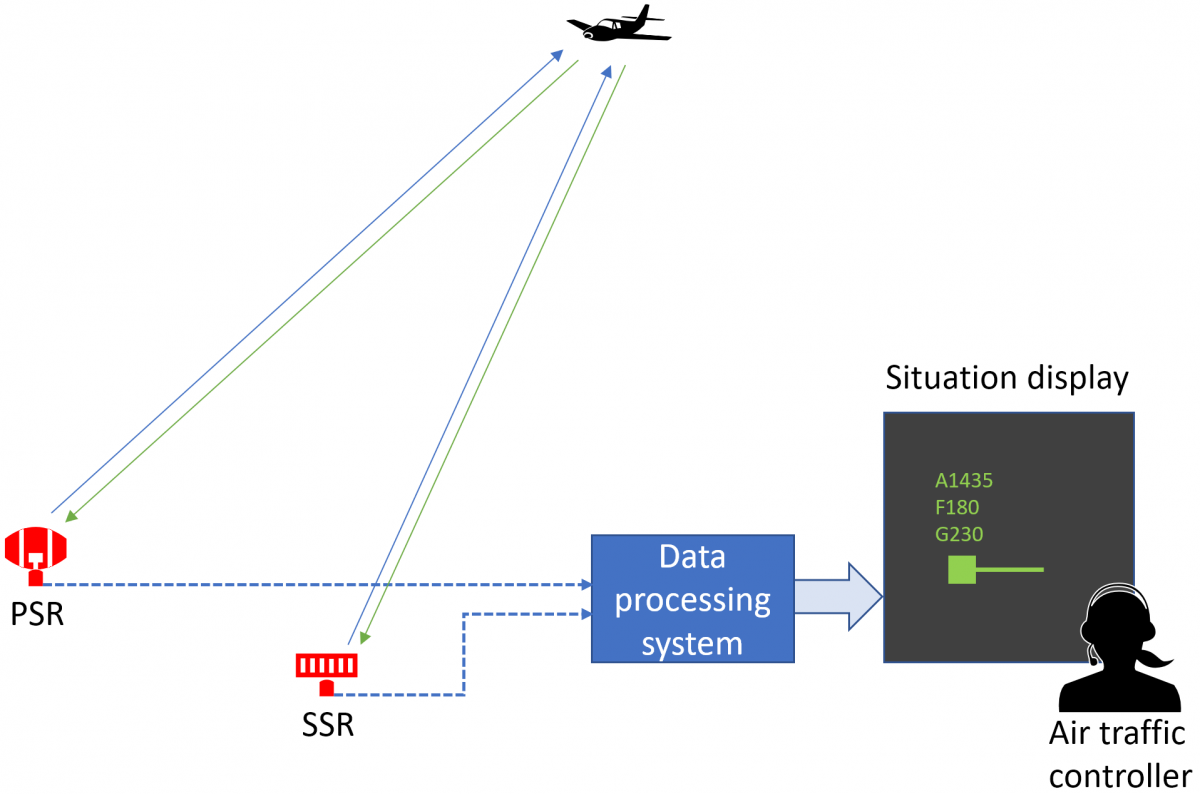 The surveillance chain - sensors (in this example a PSR and an SSR), data processing and a situation display.

The most common sensors used today are:

Note: While ADS-C can also be considered (to some extent) to be a suveillance technology, its lower position update rate does not offer the benefits that are commonly associated with surveillance, such as the possibility to use radar vectoring and lower separation minima.

Surveillance can be dependent or independent based on the place where aircraft position is calculated. If independent surveillance is used, the position is determined by the ground station using the received reply or reflected signal. Examples of such sensors are radars (both primary and secondary) and MLAT. With dependent surveillance, aircraft position is calculated by onboard equipment (e.g. GNSS receiver, INS, etc.) and is then transmitted to the ground station. An example of this principle is ADS-B.

Surveillance can also be classified as cooperative or uncooperative based on whether or not aicraft systems are necessary. A sensor for uncooperative surveillance can detect aircraft regardless of their equipment. An example is the primary radar. The other three mentioned sensors (SSR, MLAT and ADS-B) all need some information from the aircraft (although MLAT and SSR perform their own position calculation as stated above).

Individual sensors (or sensor arrays in the case of MLAT) may produce position information in two forms:

Important parametres of sensors are position accuracy and refresh rate. The former depends on:

Position refresh rate determines how often the picture on the situational display is updated. With radars, this is determined by the antenna rotation speed which means that a typical en-route radar will update each target approximately 6 times per minute (one complete rotation takes about 10 seconds). An aerodrome radar is usually faster with about 10-12 updates per minute (corresponding to a rotation period of 5-6 seconds). ADS-B and MLAT updates are usually much more frequent (e.g. updated every second) but this depends on the particular environment as well. For example, the MLAT update rate depends on the frequency of interrogations in the particular area (i.e. how many SSRs and dedicated interrogators are involved). In the ADS-B case, the update rate depends solely on the onboard equipment. If a multi-radar tracker is used, the position update rate depends on the tracker settings but it is possible to make it more frequent than individual sensor update rates.

The use of surveillance systems offers a number of benefits to the provision of air traffic services, both in the safety and the efficiency aspects. The most notable of these are:

The use of surveillance systems, while beneficial to the aviation industry as a whole, also presents some risks and challenges. These need to be properly addressed in order to safely reap the potential benefits. The most notable of them are: