Threats are defined as “events or errors that occur beyond the influence of the flight crew, increase operational complexity, and which must be managed to maintain the margins of safety”. During typical flight operations, flight crews have to manage various contextual complexities. Such complexities would include, for example, dealing with adverse meteorological conditions, airports surrounded by high mountains, congested airspace, aircraft malfunctions, errors committed by other people outside of the cockpit, such as air traffic controllers, flight attendants or maintenance workers, and so forth. The TEM model considers these complexities as threats because they all have the potential to negatively affect flight operations by reducing margins of safety.

Some threats can be anticipated, since they are expected or known to the flight crew. For example, flight crews can anticipate the consequences of a thunderstorm by briefing their response in advance, or prepare for a congested airport by making sure they keep a watchful eye for other aircraft as they execute the approach.

Some threats can occur unexpectedly, such as an in-flight aircraft malfunction that happens suddenly and without warning. In this case, flight crews must apply skills and knowledge acquired through training and operational experience.

Lastly, some threats may not be directly obvious to, or observable by, flight crews immersed in the operational context, and may need to be uncovered by safety analysis. These are considered latent threats. Examples of latent threats include equipment design issues, optical illusions, or shortened turn-around schedules.

Threat management is a building block to error management and undesired aircraft state management. Although the threat-error linkage is not necessarily straightforward, although it may not be always possible to establish a linear relationship, or one-to-one mapping between threats, errors and undesired states, archival data demonstrates that mismanaged threats are normally linked to flight crew errors, which in turn are oftentimes linked to undesired aircraft states. Threat management provides the most proactive option to maintain margins of safety in flight operations, by voiding safety-compromising situations at their roots. As threat managers, flight crews are the last line of defense to keep threats from impacting flight operations. 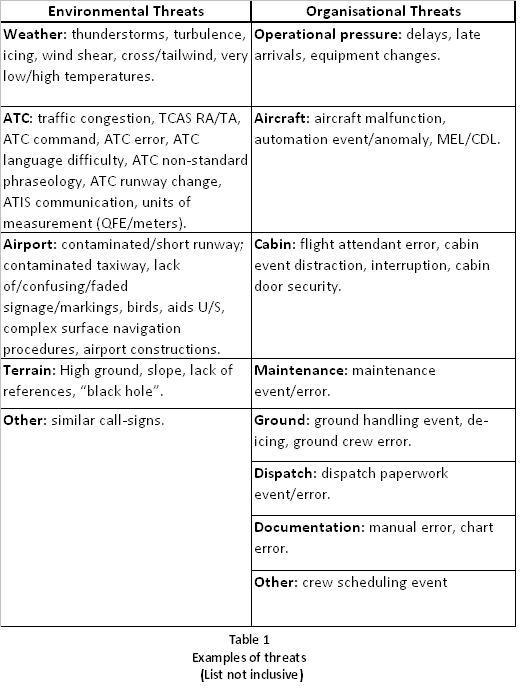 Table 1 presents examples of threats, grouped under two basic categories derived from the TEM model. Environmental threats occur due to the environment in which flight operations take place. Some environmental threats can be planned for and some will arise spontaneously, but they all have to be managed by flight crews in real time. Organisational threats, on the other hand, can be controlled (i.e., removed or, at least, minimised) at source by aviation organisations. Organisational threats are usually latent in nature. Flight crews still remain the last line of defence, but there are earlier opportunities for these threats to be mitigated by aviation organisations themselves.

Errors are defined “actions or inactions by the flight crew that lead to deviations from organisational or flight crew intentions or expectations”. Unmanaged and/or mismanaged errors frequently lead to undesired aircraft states. Errors in the operational context thus tend to reduce the margins of safety and increase the probability of adverse events.

Errors can be spontaneous (i.e., without direct linkage to specific, obvious threats), linked to threats, or part of an error chain. Examples of errors would include the inability to maintain stabilised approach parameters, executing a wrong automation mode, failing to give a required callout, or misinterpreting an ATC clearance.

Regardless of the type of error, an error’s effect on safety depends on whether the flight crew detects and responds to the error before it leads to an undesired aircraft state and to a potential unsafe outcome. This is why one of the objectives of TEM is to understand error management (i.e., detection and response), rather than solely focusing on error causality (i.e., causation and commission). From the safety perspective, operational errors that are timely detected and promptly responded to (i.e., properly managed) do not lead to undesired aircraft states, do not reduce margins of safety in flight operations, and thus become operationally inconsequential. In addition to its safety value, proper error management represents an example of successful human performance, presenting both learning and training value.

Capturing how errors are managed is then as important, if not more, than capturing the prevalence of different types of error. It is of interest to capture if and when errors are detected and by whom, the response(s) upon detecting errors, and the outcome of errors. Some errors are quickly detected and resolved, thus becoming operationally inconsequential, while others go undetected or are mismanaged. A mismanaged error is defined as an error that is linked to or induces an additional error or undesired aircraft state. 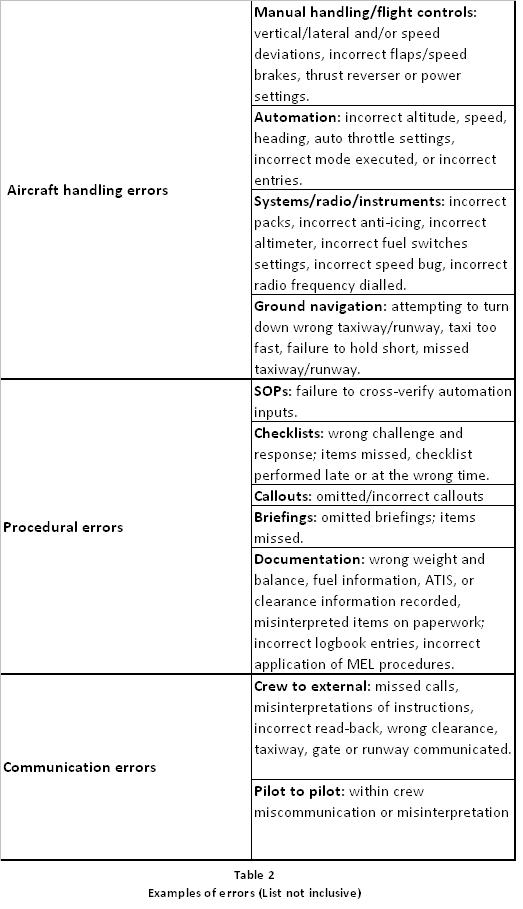 Examples of undesired aircraft states would include lining up for the incorrect runway during approach to landing, exceeding ATC speed restrictions during an approach, or landing long on a short runway requiring maximum braking. Events such as equipment malfunctions or ATC controller errors can also reduce margins of safety in flight operations, but these would be considered threats. Undesired states can be managed effectively, restoring margins of safety, or flight crew response(s) can induce an additional error, incident, or accident. 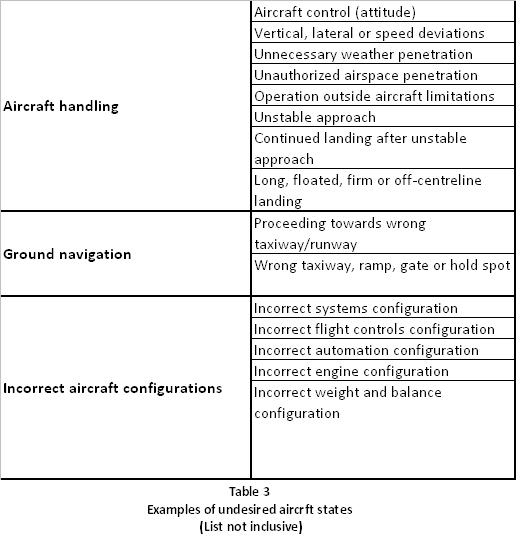 The training and remedial implications of this differentiation are of significance. While at the undesired aircraft state stage, the flight crew has the possibility, through appropriate TEM, of recovering the situation, returning to a normal operational state, thus restoring margins of safety. Once the undesired aircraft state becomes an outcome, recovery of the situation, return to a normal operational state, and restoration of margins of safety is not possible.

Flight crews must, as part of the normal discharge of their operational duties, employ countermeasures to keep threats, errors and undesired aircraft states from reducing margins of safety in flight operations. Examples of countermeasures would include checklists, briefings, call-outs and SOPs, as well as personal strategies and tactics. Flight crews dedicate significant amounts of time and energies to the application of countermeasures to ensure margins of safety during flight operations. Empirical observations during training and checking suggest that as much as 70% of flight crew activities may be countermeasures-related activities.

Enhanced TEM is the product of the combined use of systemic-based and individual and team countermeasures.