The basics of threat management, including definitions of terms, types of threats and how threats develop were covered by the Threat Management and Error Management briefing notes, which are a prerequisite to understanding this document and should be read first.

This briefing note focuses on the point that simple texts describing threat-management strategies are not sufficient to prepare pilots to manage complex threats. It is also necessary for a pilot to understand the need for such threat-management strategies and to see how such strategies were developed and can affect real-world situations. It is relatively simple for an organization to develop threat-management schemes based on past events, but training crews to the level where they can quickly implement the schemes in the cockpit, when conditions are unfavorable and workload is high, is a more difficult undertaking.

Training is one important way to improve the threat-management ability of a flight crew. This briefing note introduces training techniques for threat and risk management that are designed to improve a crew’s ability to detect and deal with unexpected threats. This is accomplished by increasing the crew’s general situational awareness, rather than by establishing a large number of rote procedures that attempt to anticipate the majority of threatening situations. This is similar to the philosophy of the traffic-alert and collision avoidance system (TCAS), which issues traffic alerts (TAs) to raise the pilot’s attention and create situational awareness, rather than simply issuing resolution alerts (RAs) that command the pilot to take corrective action. By providing the TAs, TCAS engages the crew in the situation and provides it with a broader context for accepting and executing the RA.

It would be unrealistic to attempt to train for optimal threat-management performance under all circumstances. The timing and nature of the full range of threats facing a flight crew simply cannot be defined. It is therefore necessary to focus training on developing risk tolerance by creating appropriate attitudes and problem-solving techniques that prepare a crew to face any reasonable threats. Thus, the basic philosophy of training discussed here is thoroughly pragmatic and complementary to existing training approaches.

Various strategies can be used to prepare a crew to better manage threats. This is illustrated by the Airbus Crew Resource Management (ACRM) training program and the output of the Enhanced Safety through Situation Awareness Integration (ESSAI) research and development project, each of which is discussed below.

Each of these resources has upper and lower limits with respect to the amount of mental effort that a pilot can contribute to a task and still maintain situational control. ACRM attempts to train pilots to work within a safety buffer zone that never pushes a pilot to the limits of his or her mental resources. Staying within this buffer zone helps a pilot avoid going down the risk/error spiral. This concept is similar to the design of the Airbus fly-by-wire controls that have a buffer zone that provides ample safety margins and alerts the flight crew to problems through a series of warning signals. With proper training on threat management, a pilot should be able to recognize the warning signals that he or she is reaching the limits of mental resources and things might be getting out of control.

One important aspect of threat management training involves teaching pilots how to keep track of threats and errors and learning to ask the correct questions:

Sometimes the opposite is true and demands are low, especially when automation is in use. In such situations a pilot must learn to keep mental resources balanced. Maintaining resource balance during these times will help the pilot be better prepared when action is needed for normal operations or when unexpected events occur.

Becoming proficient in balancing mental resources requires exposure to operational events specific to an aircraft type throughout the training period, paying attention to operational experience from the airlines and applying safety and risk management throughout the learning process. This is the aim of Manufacturer’s Line-Oriented Flight Training (MLOFT) that uses airline LOFT scenarios to sharpen skills, knowledge and resources.

The goal of the ESSAI research and development project — funded by the European Union and completed in 2003 — was to provide workable training tools and techniques to help:

The project prepared an inventory of skills to develop a structure of well-identified competencies from which skill interrelationships could be made clear. Situational awareness and threat management skills were each broken down into four competencies that reflect iterative steps in the thinking process.

The DVD’s main menu consists of three central sections preceded by an introduction and concluded by a summary of key learning points:

Using the University of Texas model, the first and most effective defense is to identify potential threats and avoid them. But all threats cannot be predicted, so another level of threat management must be used when they slip through the “avoid” layer. In these circumstances, current threats that are developing can be trapped and corrected. If a threat slips through the “trap” layer, then the final strategy is to mitigate its effect. This involves identifying threats that have occurred and limiting the damage.

This concept aims to help pilots picture how they apply their mental resources in different situations. It helps us to prioritize the allocation of our mental resources. It is a concept, not an exact procedure. A pilot has to pay attention to turbulent and weak signals and speak up if he or she is getting behind the aircraft. Examples of identifiers to recognize loss of (-) or gain of situational awareness (+) are short-listed in ESSAI and include the pilot: 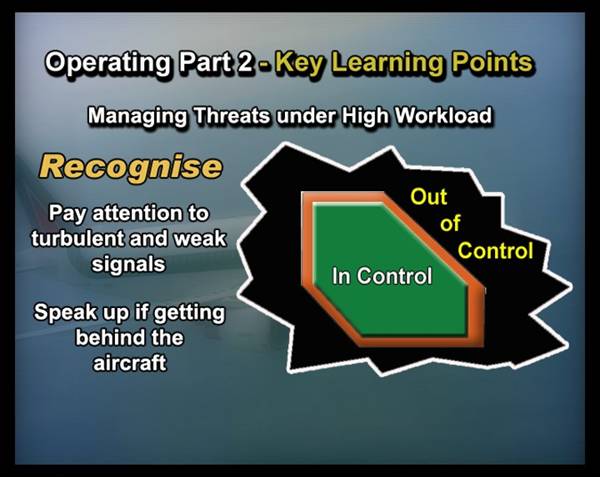 Within these dimensions, a conceptual workload envelope can be plotted, showing where sufficient mental resources are available to deal with both thinking and flying to effectively balance workload among crewmembers. This represents the “in control” or “ahead of the aircraft” region, where demands on mental resources can be met by the available brainpower.

Results indicate that situational awareness and threat management increased as a result of the training across all methods of measurement. Observations showed that especially the briefing quality for the approach and landing phase, as well as the management of distractions, can be significantly improved by means of ESSAI training. The roles of situational awareness and threat management skills as reviewed by ESSAI are summarized as follows: 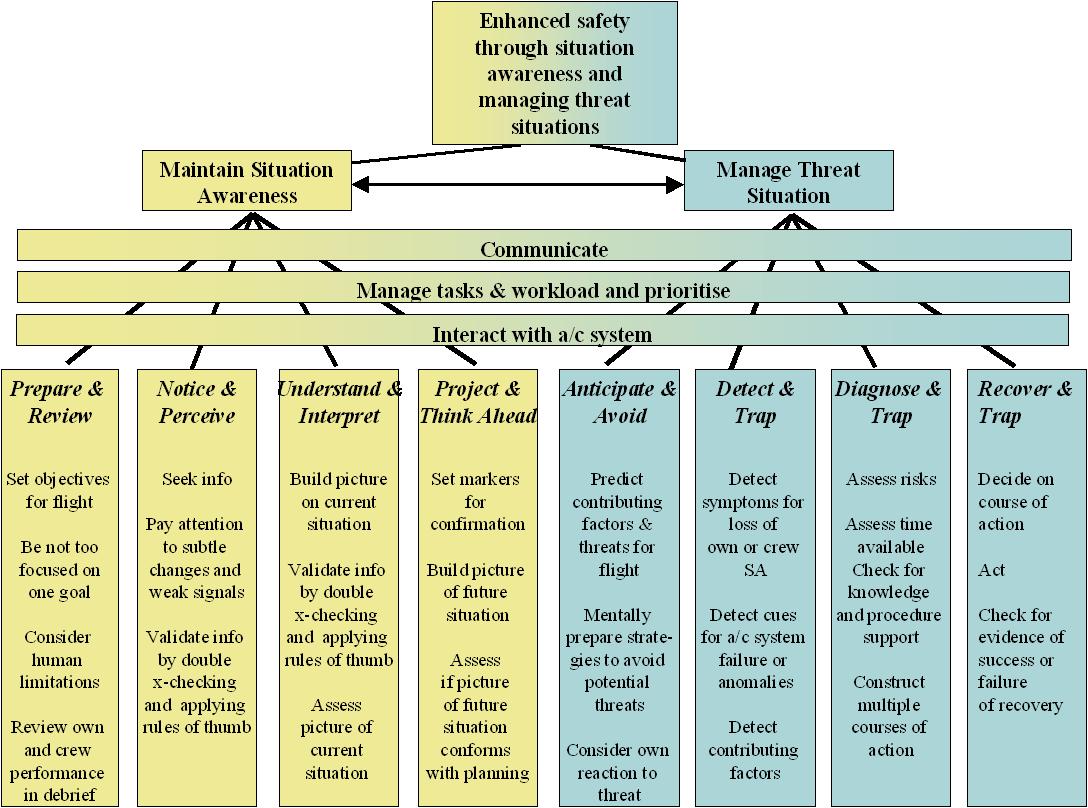 The process of threat management is certainly a cyclical and adaptive process depending on such external factors as situation complexity, time pressure, workload and associated risks, and such internal ones as crew expertise and experience that need to be balanced.

The following skills were defined to be aware of, to identify and to manage threats:

4 Strategies Based on Crew Operational Techniques

4.1 Threat and error management to ‘stay well ahead of the situation’

This scheme insists that pilots verbalize, verify and monitor threat appearance, and review crew proficiency with regard to TEM during line operations safety audits when the collection and accumulation of threat lists are being refined.

4.2 Threat and error management to ‘stay in the context of the situation’

This strategy positions TEM as a context of CRM and appropriately focuses CRM on a set of countermeasures for managing threats and errors in the language of pilots:

CRM skill training focuses on developing countermeasure competencies in group climate, team planning, execution, and review/modification to manage threats and errors with the TEM framework in the background.

As understood from the various TEM models, there is a need for mental resources to guide pilot cognition and behavior in the right direction. Faced with familiar or unfamiliar threats or with challenging operational situations, pilots are expected to adopt an attitude that guides them in the correct direction and to follow golden rules. This attitude may have to encompass the full scope of human factors to mingle technical and non-technical interactions, which is a highly demanding requirement that is not easily achieved without some quality aids.

The various notions involved here must not be remembered as declarative or literary knowledge, but rather as an operative and pragmatic resource ready to be invoked when facing an operational situation (i.e., an operational context, a practice to deal with the context, a defense to utilize, preserve and manage).