The description 'Tornado' is most often applied to a violently spinning vortex of air with a diameter varying from a few to several hundred metres in which the central air pressure is extremely low and the horizontal pressure gradient near its centre intense. Deep atmospheric instability appears to be a prerequisite for its formation and so they are often associated with thunderstorms, heavy rain and hail such as occurs when Cumulonimbus (Cb) Cloud is present. 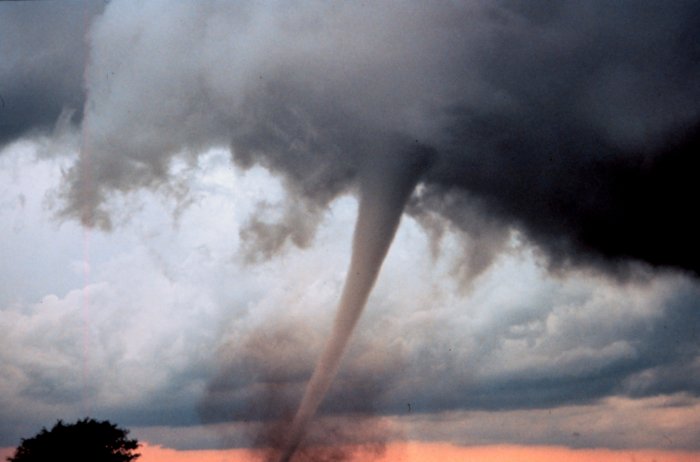 Tornados are characteristically relatively short lived - although the larger a feature they are, the longer they will normally last. They may be seen extending down from the cloud base as a funnel cloud which reaches the surface, where a debris cloud may be evident. The extent to which the funnel cloud is visible will depend on the moisture content of the air. The funnel form may be visible due to condensation and often takes on the colour of the earth and debris that is being sucked up by the funnel. Surface wind speeds in the largest tornadoes, which are a particular feature of the summer weather in the USA east of the Rocky Mountains, have been estimated to reach 200 knots.

There are numerous types of tornado but the most destructive occur when an extensive, persistent and severe Thunderstorm exists. Strong downdrafts at the trailing edge of the storm can force a rotating mesocyclone towards the ground. Clear of the cloud of origin, the characteristic funnel cloud then appears. Eventually, the cold downdrafts cut off the supply of warm air which feeds both the tornado and the updraft within the storm cloud and the tornado dissipates.

A Tornado can cause considerable damage to airport and air traffic control infrastructure if it touches down on an aerodrome; any aircraft caught on the ground in the path of a tornado will quite possibly be damaged beyond repair. It is difficult to imagine any aircraft surviving the experience of encountering a tornado while in flight. If an aircraft on the ground cannot be removed from an at-risk position, then damage to it and other aircraft and structures may be lessened by securing the aircraft to the ground.

For information on the all the hazards associated with thunderstorms, see the main article Cumulonimbus (Cb).

Encounters between aircraft and tornadoes when in flight are, given the limited extent and prevalence of tornadoes and the usual recognition and avoidance of the hazard they may represent, unsurprisingly rare. However, on 6 October 1981, a Fokker F-28-4000 being operated by NLM Cityhopper on a passenger flight from Rotterdam to Eindhoven in the Netherlands broke up in flight in severe turbulence associated with a tornado some 15nm south south east of Rotterdam and all occupants were killed. FDR data obtained at the time stated that the aircraft had encountered sudden vertical acceleration reaching 6g which had resulted in one wing being detached from the aircraft and consequent terminal loss of control.

Some US airports where tornadoes have occurred