Sometimes called upper atmospheric lightning or ionospheric lightning, transient luminous events (TLEs) are short-lived electrical-breakdown phenomena/electrically induced forms of luminous plasma that occur well above the altitudes of normal lightning and Cumulonimbus (Cb) clouds. Although there had been reports of such phenomena by pilots and others for some years, it wasn’t until 1989 that TLEs were documented photographically with full scientific investigations to follow. 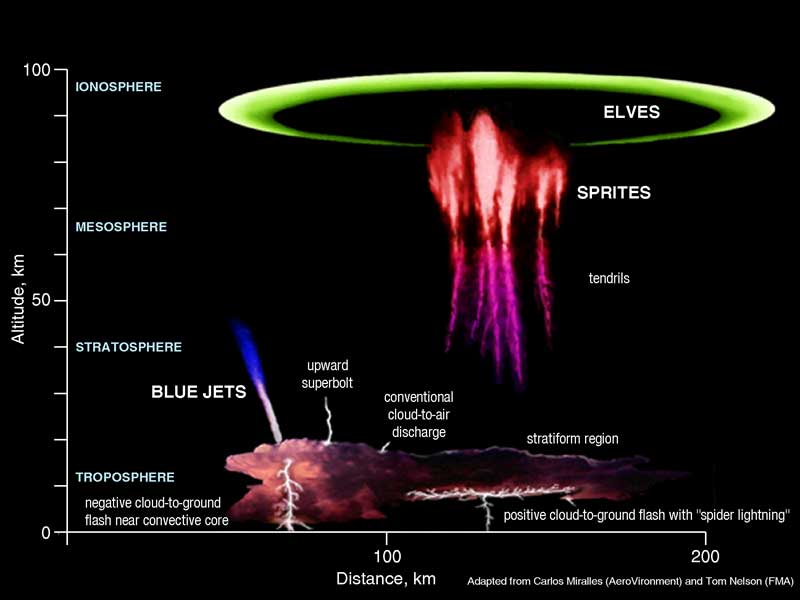 Sprites are short-lived flashes of bright red light that occur above large storm systems, reach 50 – 90 km in altitude, and are triggered by positive discharges of lightning between the top of a thundercloud and the ground (commonly called positive giants). Sprite is also an acronym for Stratospheric/mesospheric Perturbations Resulting from Intense Thunderstorm Electrification. They are reddish-orange or greenish-blue in colour with hanging tendrils (sometimes referred to as "carrot sprites") and arcing branches above. Unlike tropospheric lightning, sprites are cold plasma, similar to fluorescent tube discharge. Based on their shape and visual appearance, we distinguish three types of sprites: jellyfish, column and carrot sprites. 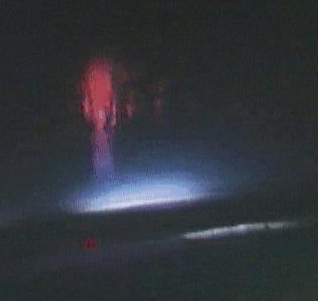 Blue jets project directly from the top of the thunderstorm in a narrow cone jet up to approximately 50 km altitude and last only a fraction of a second. Unlike sprites, blue jets are, as the name implies, blue in color. A smaller variation of blue jets are blue starters, which are similar to blue jets, but only reach about 20 km high up and are thought to be ‘failed’ blue jets. 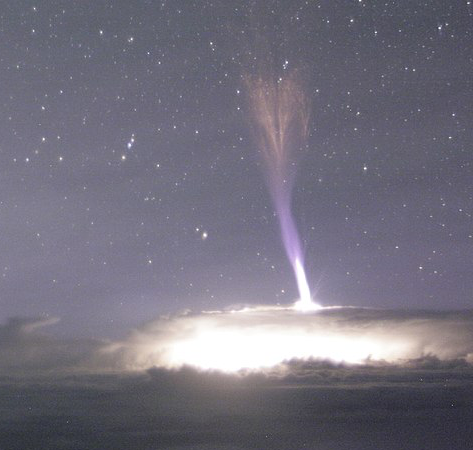 Where blue jets are believed to initiate between the upper positive charge region and a negative screening layer directly above this region, Gigantic jets appear to initiate between the upper positive and lower negative charge regions in the thundercloud. In a similar process to how blue jets form, the higher charge region is discharged by the leader network before the same occurs in the lower charge region, and one end of the leader network propagates upward from the cloud toward the ionosphere. Gigantic jets, which are relatively rare, reach higher altitudes than blue jets (up to 70 km), and the upper portion of the jet changes colour from blue to red.

ELVES (Emission of Light and Very Low Frequency perturbations due to Electromagnetic Pulse Sources) are indistinct types of TLE, producing large diffuse and expanding ring-shaped glows, up to 400 km in diameter. They occur in the ionosphere 100 km above the ground over thunderstorms. The light is generated by the excitation of nitrogen molecules due to electron collisions (the electrons possibly having been energized by the electromagnetic pulse caused by a discharge from an underlying thunderstorm). They are so quick (0.001 seconds), that it is impossible to see them with the naked eye.

It is possible that sprites and jets could cause electromagnetic pulses in the flight electronics of aircraft flying directly overhead a storm but evidence is limited (see Further Reading).