An uncontrolled aerodrome is an aerodrome without a control tower, or one where the tower is not in operation.

The following procedures apply to all aircraft operating at uncontrolled aerodromes except those aircraft that are following a standard instrument approach procedure.

Prior to joining a traffic circuit, all pilots should announce their intentions and once in the circuit, make all of the appropriate position reports. The traffic circuit is generally flown at 1000' above airport elevation (AAE) and all turns in the circuit are to the left unless a right-hand circuit has been specified in the relevant publications. Pilots are expected to approach and land on the active runway. The active runway is a runway that other aircraft are using or are intending to use for the purpose of landing or taking off.

Should it be necessary for an aircraft to land on, or take off from a runway other than the active runway, it is expected that the appropriate communication between the pilot and the ground station (if available) or between the pilot and other local traffic will take place to ensure that there are no conflicts.

The following illustration depicts circuit joining and departure procedures at an uncontrolled aerodrome without Mandatory Frequency (MF) procedures (or equivalent) in place. 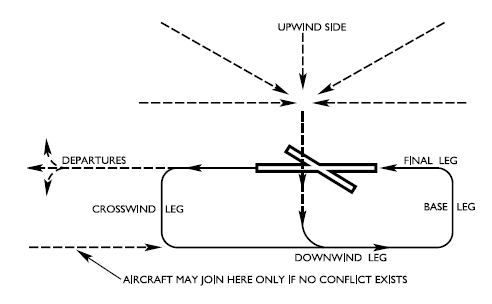 For aerodromes within a Mandatory Frequency (MF) area (or equivalent) when airport advisory information IS available, pilots have additional circuit joining options:

VFR aircraft departing the airport should climb straight ahead on the runway heading until reaching the circuit traffic altitude before commencing a turn in any direction to an en-route heading. Turns back toward the circuit or airport should not be initiated until at least 500' above the circuit altitude.

When the weather conditions at the aerodrome could permit VFR circuit operations, pilots of IFR aircraft are expected to approach, land and depart on the active runway that may be established by the aircraft operating in the VFR circuit. Should it be necessary for the IFR aircraft to use a runway contrary to the established VFR operation, it is expected that appropriate communications, between pilots or between pilots and the air-to-ground facility, will be effected in order to ensure there is no traffic conflict.

Aircraft conducting an IFR approach to an aerodrome located within controlled airspace will be deconflicted from other arriving and departing IFR traffic by ATS. Deconfliction from VFR aircraft is a pilot responsibility. Holding clearances will be issued as required and an approach clearance will be provided at the appropriate time.

If the aerodrome is located within uncontrolled airspace, no ATS approach clearance will be issued. An advisory service may or may not be available to provide traffic information; however, deconfliction from any traffic becomes the responsibility of the pilots concerned. It is, therefore, essential that communications and reporting procedures as outlined in the article Uncontrolled Aerodromes - Communications are followed.

Where a pilot of an IFR flight intends to take off from an uncontrolled aerodrome, the pilot shall: